Low protein intake is associated with a major reduction in IGF-1, cancer, and overall mortality in the 65 and younger but not older population.

Note: This study does not seem to discuss meat with/without antibiotics, roundup, etc. 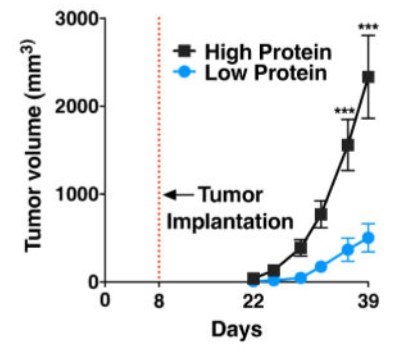 Mice and humans with growth hormone receptor/IGF-1 deficiencies display major reductions in age-related diseases. Because protein restriction reduces GHR-IGF-1 activity, we examined links between protein intake and mortality. Respondents aged 50-65 reporting high protein intake had a 75% increase in overall mortality and a 4-fold increase in cancer death risk during the following 18 years. These associations were either abolished or attenuated if the proteins were plant derived. Conversely, high protein intake was associated with reduced cancer and overall mortality in respondents over 65, but a 5-fold increase in diabetes mortality across all ages. Mouse studies confirmed the effect of high protein intake and GHR-IGF-1 signaling on the incidence and progression of breast and melanoma tumors, but also the detrimental effects of a low protein diet in the very old. These results suggest that low protein intake during middle age followed by moderate to high protein consumption in old adults may optimize healthspan and longevity.

Mortality increased: 4X Cancer, 5X Diabetes if eat a lot of meat protein – March 2014         Printer Friendly Follow this page for updates
This page is in the following categories (# of items in each category)
Diabetes 473 Mortality and D 265 Cancer 228