Comparison of the effect of vitamin E, vitamin D and ginger on the severity of primary dysmenorrhea: a single-blind clinical trial

Vitamin D would probably have been much BETTER than Ginger if the study had used more vitamin D (say 4,000 IU daily) and/or a loading dose (400,000 IU) 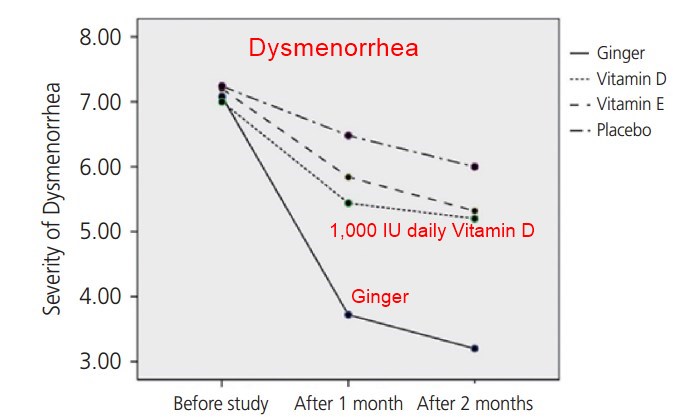 Objective
Dysmenorrhea is one of the most common problems for women, especially during their reproductive age. Various studies have examined the effects of vitamins D and E and ginger supplements. This study aimed to investigate the individual effects of each of these supplements on dysmenorrhea.

Methods
This single-blind clinical trial was conducted in 2016 on students aged 18 to 25 years who complained of mild to severe dysmenorrhea. The participants were randomly assigned into 4 groups: vitamin D, vitamin E, ginger, and placebo. The effects of the supplements on the severity of dysmenorrhea were evaluated in 2 successive cycles using the visual analog scale (VAS) and a questionnaire.

Results
Initially, 240 female students were enrolled in the study; thereafter, 40 students were excluded from the study owing to follow-up loss. The average VAS score for dysmenorrhea in the entire study population was 7.13±0.80 before the intervention; the mean VAS score after the first and second months of supplement use was 5.37±1.51 and 4.93±1.48, respectively. The highest reduction in pain severity was observed in the ginger group (F=74.54, P<0.001).

Conclusion
Vitamin D, vitamin E, and ginger significantly reduced the severity of dysmenorrhea, with ginger having the most significant effect followed by vitamin D and vitamin E. Given the low risk of these supplements, more studies must be conducted on their use as opposed to analgesics.