Items in both categories UV and Breast Cancer are listed here: 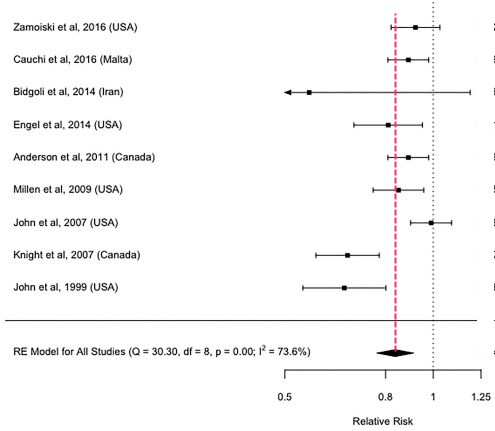 Background:
A protective relationship has been hypothesized between exposure to solar ultraviolet radiation (UVR) and the development of breast cancer.

Objective:
The objective of this study was to conduct a systematic literature review and meta-analysis of studies examining the association of exposure to solar UVR and breast cancer risk.

Methods:
We searched Medline, EMBASE, and Web of Science for all studies investigating exposure to solar UVR and breast cancer risk. Separate analyses were performed using estimates of time spent in the sun, and ambient UVR. Associations were estimated using DerSimonian and Laird random-effect models. Heterogeneity was investigated through subgroup analyses and I2 statistics.

Solar ultraviolet radiation (UVR) is an omnipresent exposure with confirmed detrimental and potential protective effects on cancer risk. Although a causal relationship between UVR and cutaneous malignancies has been established (IARC 1992), a certain amount of ultraviolet B (UVB) radiation—wavelength of 290–315 nm—from the sun may be protective for some noncutaneous malignancies, including breast cancer (van der Rhee et al. 2013). The potential biological mechanisms underlying a protective relationship between moderate UVR exposure and noncutaneous malignancies are based on the antiproliferative and apoptotic properties of vitamin D (Webb and Holick 1988) as well as increases in nocturnal melatonin concentrations, which have also been shown to have antiproliferative effects (Stevens 2005).

Several ecologic studies have examined the relationship between breast cancer incidence and latitude or measures of ambient UVR (Bilinski et al. 2014; Boscoe and Schymura 2006; Gorham et al. 1990; Grant 2012, 2013; Mandal et al. 2009; Mohr et al. 2008). These ecologic studies, despite their limitations, in general support the hypothesis that greater levels of solar UVR exposure may reduce an individual’s risk of breast cancer. In addition, the most recent meta-analysis (Estébanez et al. 2018) and pooled analysis (McDonnell et al. 2018) on circulating vitamin D and breast cancer risk have found a reduced risk with increasing levels of vitamin D. A body of literature exists pertaining to the relationship between solar UVR exposure and breast cancer risk, including a systematic review of case–control and cohort studies (van der Rhee et al. 2013). Two primary measures of solar UVR exposure exist: ambient UVR radiation—an ecologic measure—often measured in kilojoules per squared meter (kJ/m2) or Watts (W) (for use in large studies, where individual measurements have not been collected or are not practical), and time spent in the sun—usually denoted as the number of hours an individual spends outdoors on an average summer weekday/weekend. Among this body of literature, study results have been inconsistent (van der Rhee et al. 2013). Differences in geographic location, study design, confounders adjusted for, and exposure measures exist, which may explain the current heterogeneity of results. Existing literature has demonstrated differences in the risk factor profiles for breast cancers based on menopausal and hormone receptor subgroups (Blackmore et al. 2008). In addition, there is some evidence that UVR exposure during periods of development and hormonal changes—such as adolescence—may have a distinct relationship with the incidence of breast cancer (Colston and Hansen 2002; Setiawan et al. 2009). The published literature has yet to be synthesized through the generation of summary effect estimates.

Printer Friendly PDF this page! Follow this page for updates
This page is in the following categories (# of items in each category)
UV and Vitamin D 327 Cancer - Breast 220 Meta-analysis of Vitamin D 463
Edit Comments Files 2