Department of Pediatrics, Hospital of Southwest Denmark, Finsensgade 35, 6700 Esbjerg, Denmark. sbeck-nielsen at health.sdu.dk.
Dan Med J. 2012 Feb;59(2):B4384.
Abstract (From her 2009 PHD dissertation attached to the bottom of this page)

Rickets is a heterogeneous group of diseases of the growing child caused by defect mineralization of bone.
Nutritional rickets is caused by deficiency of vitamin D, calcium or both.
Several hereditary forms of rickets exist where the disease proceeds into adulthood.
Nutritional rickets was common in the past, but by introduction of preventative administration of cod liver oil and vitamin D supplementation, nutritional rickets became a rarity.
During the last decades, case reports of nutritional rickets reappear in the industrialized countries.
It is the general conception that in the industrialized countries, hereditary rickets is the most prevalent cause of rickets today.
However, the incidence of nutritional rickets and the incidence and prevalence of hereditary rickets in Scandinavia are unknown.
The most common form of hereditary rickets is hypophosphatemic rickets (HR).
The geno- and phenotype among Scandinavian patients have not been characterized.
Especially, the disease in adult patients is not well described.
Moreover, there are conflicting reports of the benefits of medical treatment throughout childhood, and in addition on gender differences in disease severity.
The aims of the Ph.D-study were to:

Patients and methods: By register search in the Danish National Patient Registry (DNPR) and in the hospital registers of Southern Denmark from 1985 to 2005, patients aged less than 15 years with rickets were identified. The search was based on diagnosis codes referring to rickets.
After review of the medical records, patients fulfilling the diagnostic criteria of nutritional or hereditary rickets were included in the study.
The ethnicity of the patients was determined by linkage to The Central Office of Civil Registration and the size of the background population in the age groups during the study period was obtained from Statistics Denmark.
Based on these data, the incidence of nutritional rickets and the incidence and prevalence of hereditary rickets were calculated.
Symptoms, clinical and biochemical characteristics of nutritional rickets were described upon data retrieved from the medical records.
Patients with HR were identified through register search in (DNPR) from 1977 to 2005 and in hospital registers from 1985 to 2006 based on the diagnosis codes of HR.
In addition, doctors known to treat patients with HR were contacted and family screening performed.
Nutritional and hereditary rickets: A total of 112 patients aged less than 15 years with nutritional rickets were identified.
Of these, 83 were immigrant children and 29 were ethnic Danish.
Hereditary rickets was diagnosed in 16 patients.
Nutritional rickets was predominantly seen among immigrant children and was the most common type of rickets in all young children living in Denmark.
However, hereditary rickets was more common than nutritional rickets among ethnic Danish children.
Infants and young children displayed the characteristic clinical signs of rickets, but in older children and adolescents the clinical signs were few and symptoms unspecific indicating a risk of under diagnosis.
Possible risk factors in the young children were

Since the majority of the ethnic Danish children were diagnosed at age 12-24 months, we recommend an extension of the period of vitamin D supplementation until 2 years of age in ethnic Danish children.
In addition, a possible approach towards elimination of rickets in Denmark may be the introduction of food fortification with vitamin D.

Hypophosphatemic rickets: A total of 59 patients with hereditary FGF23-associated HR were identified.
Mutations in the PHEX gene were found in 83% of all probands and were the most common cause of hereditary FGF23-associated HR in ethnic Danish patients.
A MDP1 mutation was identified in a single Lebanese child.
Six patients previously diagnosed with HR were excluded from the study and they represent the possible differential diagnoses of HR.
Growth retardation and disproportioned body proportions were due to reduced growth of the long bones of the legs.
Reduced growth was also seen in the arms, whereas the growth of the skull was increased.
Elevated BMD of lumbar spine was characteristic.
Especially in adult patients aged 40+ years, pain in the joints and decreased ranges of hip movement were frequent as were enthesiopathies of the spine and several spontaneous dental abscesses.
HR patients had a reduced risk of fractures and the same percentage of caesarean sections compared with the background population.
Among patients with proven X-linked disease, there was a tendency of males being more severely diseased compared to females.
Current medical treatment in PHEX-positive patients was associated to hyperparathyroidism and hypercalcaemia, findings not seen in any untreated PHEX-positive patients.

In conclusion, nutritional rickets was predominantly seen among immigrant children but occasionally cases were seen among ethnic Danish children.
We therefore recommend an extension of the period of vitamin D supplementation in ethnic Danish children until 2 years of age and/or introduction of food fortification with vitamin D.
Genetic evaluation of patients with HR ensures a specific diagnosis, enables early diagnosis and treatment in children of HR parents.
The medical treatment of HR is difficult. In adult patients, the adverse effects have to be counterbalanced to the benefits of treatment.
PMID: 22293055

(2009 dissertation. She is currently active in the research field of Vitamin D, Hypophosphatemic Rickets and Vitamin D-dependent Rickets)

Criteria for deciding the type of rickets 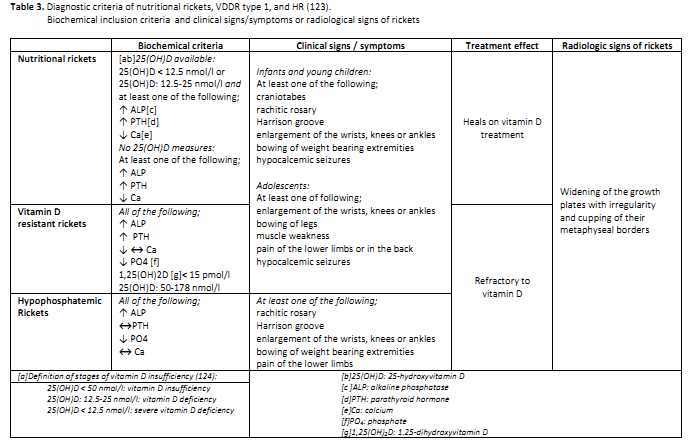 'The diagnosis of rickets was suspected by the referring physician in half of all patients but only in 24% of ethnic Danish patients.' 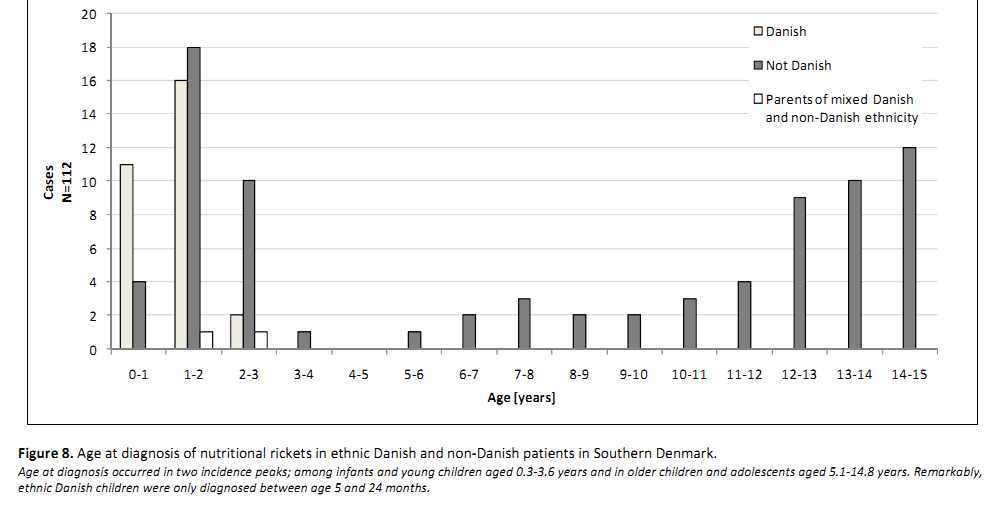 Nutritional Rickets in Denmark especially among immigrant children- Feb 2012         Printer Friendly PDF this page! Follow this page for updates
This page is in the following categories (# of items in each category)