Suicide attempts are known to peak in the spring, overlapping with the time of year when 25-hydroxyvitamin D [25(OH)D] levels are at their nadir in the northern hemisphere because of negligible skin production of vitamin D owing to low levels of ultraviolet B radiation.

Low levels of 25(OH)D, the vitamin D metabolite used to diagnose vitamin D deficiency, have been associated with certain pro-suicidal factors such as

Therefore, we hypothesize that vitamin D deficiency could also be associated with increased risk of completed suicides.
Here, we briefly review the literature on vitamin D, its deficiency, and its reported association with certain risk factors for suicide.

Studies such at This have been finding that the seasonality is going away in recent decades.
This may be similar to the difference of MS with latitude going away in the past 40 years
- - – due to air conditioning and ability to stay out of the sun in the Southern part of the US.
Note: saying that the seasonality of suicides is going away is not saying that they are decreasing.
Perhaps now that many people are vitamin D deficient most of the year the there is no longer a “low vitamin D season” = suicide season.

Diversity and change in suicide seasonality over 125 years – Switzerland 2005 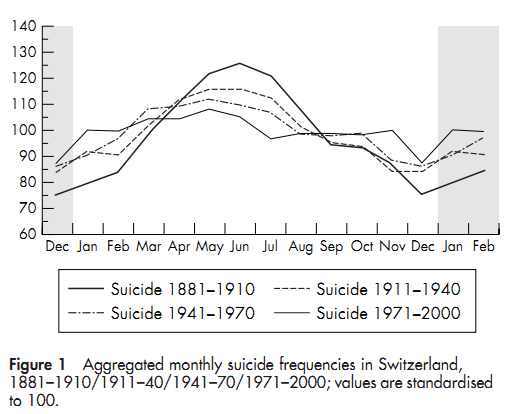 Probably just due to increase in population - as these are apparently absolute numbers, not rates per 100,000 population

Every school shooter had used antidepression drugs, but how many were low on ...Suicide 2X more likely with low vitamin D (in military) – Jan 2013