New research presented at this week’s Annual Scientific Meeting of the Australasian Society for Infectious Diseases (ASID) in Canberra, Australia, suggests a link between vitamin D levels and the risk of developing tuberculosis (TB), with rates of TB incidence up to 37% higher following darker winter months than during the rest of the year. The research is by Jennifer MacLachlan, Victorian Infectious Diseases Reference Laboratory, Melbourne, and University of Melbourne, VIC, Australia, and Dr Benjamin Cowie (the same affiliations plus the Royal Melbourne Hospital, VIC, Australia).

Australia currently reports around 1300 cases of active TB nationally per year, with around 85% of these cases originating from immigrant populations from various parts of the world. Seasonal variation in the incidence of TB has been reported in some areas, including South Africa and the United Kingdom. Relationships between TB and latitude have been reported in India, but not in the USA. Experts in TB have hypothesised that seasonal variation in TB incidence may be due to an association between lack of vitamin D and risk of reactivation of latent TB infection.

In this study, MacLachlan and Cowie compared TB notifications from the National Notifiable Diseases Surveillance System from 2002-11 with national data on variation in UV light exposure and vitamin D levels both seasonally and geographically. There were 11,576 cases of active TB notified during this decade, and significant seasonality was observed in the number of notifications per month (see attached figure). This effect was more pronounced in the Southern (Victoria, Tasmania) states compared to Central (Australian Capital Territory, New South Wales, South Australia, Western Australia) and Northern regions (Queensland, Northern Territory), with approximately double the cyclical variation in the South compared with other areas.

The researchers found that incidence of TB peaked during September-December, 2-3 months after the winter months in Australia that contain the least sunshine, and thus the months in which people have their lowest levels of circulating vitamin D. Overall notification rates in Australia were 24% higher during this period than during Jan-August, but 37% higher in the Southern states where seasonal swings in the levels of sunshine are the highest.

MacLachlan and Cowie say: “Although ecological studies such as this cannot establish causation, these findings support an association between vitamin D deficiency and the incidence of TB in Australia. This has implications for the tailoring of sun exposure messages to Australians most at risk of both vitamin D deficiency and TB, such as those born overseas and Aboriginal and Torres Strait Islander people. Blanket recommendations regarding reducing sun exposure for all Australians, particularly in winter months, may not be optimal. We need to balance the risk of skin cancer from too much sun exposure with maintaining adequate vitamin D levels.”

They add: “Clinicians should provide individualised advice to persons at higher risk for tuberculosis, especially those who have migrated from tuberculosis-endemic areas and those in whom latent tuberculosis already has been diagnosed, about vitamin D levels and consideration of supplementation as appropriate.”

The figure below shows seasonal variation. 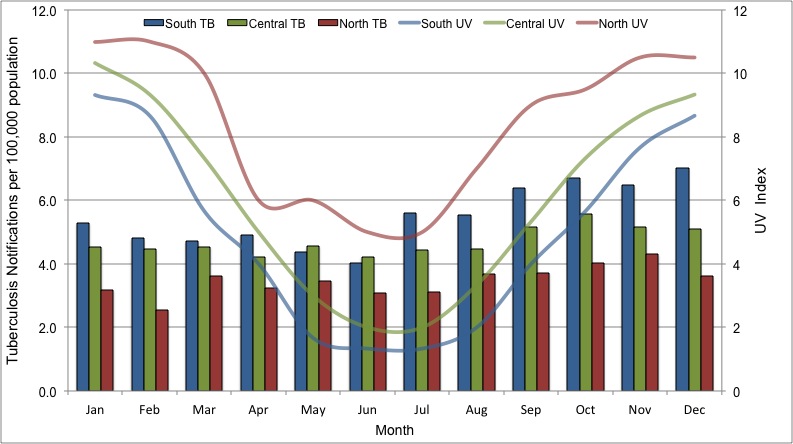 Tuberculosis varies with UVB in Australia - March 2013         Printer Friendly PDF this page! Follow this page for updates
This page is in the following categories (# of items in each category)
UV and Vitamin D 334 Tuberculosis 107

Air conditioning has not totally canceled the latitude effective in the US ye...How UVB reduces autoimmune diseases such as Multiple Sclerosis – April 2014Tuberculosis, ethnic differences, and vitamin D – July 2013Wondering about tuberculosis and Vitamin D in Australia – Nov 2013