Vitamin D insufficiency is common in Ugandan children and is associated with severe malaria. 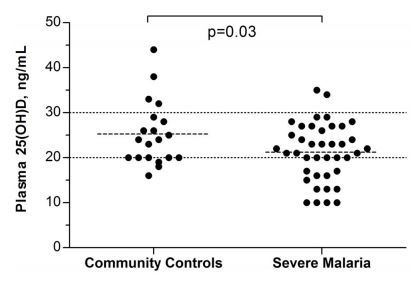 Vitamin D plays an increasingly recognized role in the innate and adaptive immune response to infection. Based on demonstrated roles in up-regulating innate immunity, decreasing inflammation, and reducing the severity of disease in illnesses such as tuberculosis and influenza, we hypothesized that poor vitamin D status would be associated with severe malaria. We measured 25-hydroxyvitamin D [25(OH)D] by immunoassay in a sample of Ugandan children aged 18 months-12 years with severe malaria (cerebral malaria or severe malarial anemia, n = 40) and in healthy community children (n = 20). Ninety-five percent of children with severe malaria (n = 38) and 80% of control children (n = 16) were vitamin D-insufficient [plasma 25(OH)D <30 ng/mL]. Mean plasma 25(OH)D levels were significantly lower in children with severe malaria than in community children (21.2 vs. 25.3 ng/mL, p = 0.03). Logistic regression revealed that for every 1 ng/mL increase in plasma 25(OH)D, the odds of having severe malaria declined by 9% [OR = 0.91 (95% CI: 0.84, 1.0)]. These preliminary results suggest that vitamin D insufficiency may play a role in the development of severe malaria. Further prospective studies in larger cohorts are indicated to confirm the relationship of vitamin D levels to severity of malaria infection and to investigate causality.

Printer Friendly PDF this page! Follow this page for updates
This page is in the following categories (# of items in each category)
Virus 179
Edit Comments Files 2