Objective: To evaluate the effect of vitamin D status on postural stability by using the limits of stability test (LOS).

Subjects and methods. Sixty-seven apparently healthy individuals were recruited for this study. They were divided according to vitamin D status into 35 subjects with vitamin D deficiency and 32 age and sex matched subjects with optimal vitamin D levels as control group. All subjects were evaluated for postural stability by using LOS test.

Conclusions. Postural instability (PI) could be a concealed risk factor for falls and fractures, appropriate assessment and effective interventions for PI are highly recommended. By using the limits of stability test (LOS), we emphasized that low concentrations of vitamin D is associated with postural instability. Also, the LOS test represents an important quantitative tools not only to measure postural instability and but also to identify individuals at high-risk of falls.

Vitamin D deficiency has recently gained much attention because of its association with cardiovascular disease, cancer, falls, fractures, and mortality(1-3). Limited researches exist on vitamin D deficiency and its effect on postural stability. It was hypothesized that vitamin D insufficiency would be associated with a preexisting fear of falling (4). Postural stability is defined as the ability to maintain the position of the body's centre of mass within specific boundaries of space or stability limits and can be quantified by the amount of body sway (i.e. postural sway). Simply, postural steadiness can be defined as postural control under static conditions, whereas postural stability is applied to dynamic postural response to volitional perturbations(5).
Postural instability (PI) has drawn attention as a risk factor for falls and fractures(6). Vitamin D deficiency has been associated with important determinants of disability, including poor physical performance, low muscular strength, cognitive impairment, falls, and fractures in older adults(7). The limits of stability (LOS) test represents an important quantitative tools to identify individuals at high-risk of falls. LOS test quantifies the maximum distance a person can intentionally displace his center of gravity (COG) (8).
Our aim is to investigate link between vitamin D status and postural stability by using limits of stability (LOS) test.

A total of sixty-seven apparently healthy individuals with age 58.37±5.86 years were recruited for this study. They were divided according to vitamin D status into 35 subjects with vitamin D deficiency and 32 age and sex matched subjects with optimal vitamin D levels as control group. All subjects were thoroughly evaluated clinically with full neurological examination. Vitamin D deficiency is defined by most experts as a 25-hydroxyvitamin D level of less than 20 ng per milliliter (50 nmol per liter) (9).
Inclusion criteria included ability to ambulate 25 feet independently, good cognitive functions, good visual field and acuity, no vestibular abnormalities, or no history of drug intake that affect postural stability.The exclusion criteria were (1) those with musculoskeletal disorders that contribute to postural instability; and (2) those with cardiac, renal, liver diseases and alcohol abuse. The patients gave their informed voluntary consent to participate in the study according to the protocol approved by the local ethics committee and in accordance with the ethical standards of the Helsinki declaration.
Fasting venous samples were collected for estimation of fasting blood sugar, calcium (Ca), phosphorus (Po4), albumin(ALB), magnesium (Mg) and alkaline phosphatase were measured using a standard autoanalyser (Hitachi, Ltd, Japan). 25(OH) D was assessed by liquid phase RIA after extraction by NaOH and acetonitrite using IDS gammabeta 25 OH vit D kit (IDS Inc., 17029, Fountain Hills A285268, USA). Intact PTH was assayed by a solid phase two site chemiluminescent enzyme - labeled immunometric assay (DPC, 5700 West 96 street, Los Angeles, CA 90045-5597, USA).
Postural stability of all subjects were evaluated by using limits of stability (LOS) test(8). LOS test quantifies the maximum distance a person can intentionally displace his center of gravity (COG), i.e. lean their body in a given direction without losing balance, stepping, or reaching for assistance. LOS measures generated by the Neuro Com Smart Balance Master System.
The measured five parameters of the limits of stability (LOS) tests are

The composite score of the 8 directions was used for calculation. The length of each target trial was 8 seconds, and subjects were requested to move the COG cursor as quickly and accurately as possible. If they were incapable of reaching the location, they were asked to sway as far as possible in the direction of the target without losing balance. Each subject had 5 to 10 minutes of familiarization with the system before conducting the test. Normal and abnormal limits of stability (LOS) test are shown in figures 1 and 2 respectively.

The Statistical Package for Social Sciences version 15.0 (SPSS Inc, Chicago, IL, USA) was used for data processing. Quantitative data were presented as mean and standard deviation and the Student t-test was used for a comparison of the means. A correlation between variables was done and the Pearson correlation coefficient was calculated. All tests were two tailed and considered statistically significant at p< 0.05.

(VitaminDWiki could not figure out what normal and abnormal parameters meant)

Vitamin D plays an important role in maintaining the postural stability and muscle functions. Also, vitamin D deficiency has been associated with poor physical performance, low muscular strength, cognitive impairment, falls, and fractures in older adults (7-10).
To our knowledge, this is the first study evaluating the relation between vitamin D status and postural stability by using the limits of stability test. In terms to LOS test, composite reaction time (RT) was significantly higher in vitamin D deficiency subjects as compared to control, however

were significantly lower in vitamin D deficiency subjects as compared to control.
On other hand, composite directional control (DCL) (%) showed non-significant difference between two groups. serum 25(OH) D showed a significant correlation with RT, MVL, EPE and MXE in subjects with vitamin D deficiency.
Assessment of postural stability using a computerized virtual reality, Boersma et al., (11) reported that low levels of vitamin D were associated with postural instability (PI) through slow gait velocity and increased body sway. Ahmed et al., (12) reported that vitamin D was correlated with the parameters that assess postural instability in the elderly using motor control test. Also, they hypothesized that prolonged latencies of motor responses in vitamin D deficiency are likely to reflect a reduction of muscle strength of elderly subjects which may be the main cause for postural instability.
Some studies have revealed increased body sway (13) and affected psychomotor function (14-15) lead to increase risk of falling among vitamin D-deficient elderly. In addition, Nakamura et al., (16) found a significant association between vitamin D status and postural sway in the vitamin-D insufficient subgroup (25(OH) D<40 nmol/l),they suggested supplementation of vitamin D should be considered for those with vitamin D insufficiency. Furthermore, Flicker et al., (17) showed that low serum level of vitamin D was associated with an increased frequency of falls in the elderly and serum 25-OHD concentrations below 20 ng/ml are associated with a greater decline in physical performance in elderly.
In meta-analysis study, vitamin D doses of 17 5-25 |ig/d (700-1000 IU/d) significantly lowered fall risk. They reported that there is 20% lower risk of falling with the vitamin D supplementation (18). Rauch and Rittweger, (19) found that administration of vitamin D to frail elderly people should improve their muscle function and consequently reduce their risk to fall and to fracture, they reported that Vitamin D (cholecalciferol) with sufficient calcium intake is able to reduce the risk of falls and fractures only when adopting optimal selection criteria for patients and study conditions.
Also, Bischoff- Ferrari et al., (6) demonstrated that vitamin D or its analogues can reduce the risk of falls in frail elderly people by 22%. Another study showed that oral or subcutaneous application of vitamin D reduces the risk of falls by about 50% in women who had had a hip fracture(20).
Furthermore, some authors reported that there is evidence that both exercise and vitamin D are essential for neuromuscular and cognitive functions, and thus contribute to reduce risk of fall (21). However, Faulkner et al., (22)showed that vitamin D supplementation, and 25(OH)D and iPTH concentrations are not associated with either neuromuscular function or falls. But, higher 1,25(OH) D concentration is associated with a lower fall risk in older community-dwelling women. Also, some authors reported that the performance speed and proximal muscle strength were markedly improved when 25-hydroxyvitamin D levels increased from 4 to 16 ng per milliliter (10 to 40 nmol per liter) and continued to improve as the levels increased to more than 40 ng per milliliter (100 nmol per liter) (23-24).
In contrary, another studies showed that supplemental vitamin D was not associated with higher muscle strength (25).
Risk of falls among persons with vitamin D deficiency have a multifactorial etiology and there are some plausible mechanistic explanations. Glerup et al., (26) showed that a significant negative correlation between serum 25(OH)D concentration and the frequency of falls due to muscle weakness. Also, Dretakiset al., (27) revealed vitamin D deficiency is associated with osteomalacic myopathy, and muscle weakness. Moreover, elderly with low intake of calcium and vitamin D, with reduced cutaneous production of vitamin D or decreased renal production of calcitriol 1,25(OH)2D may be particularly predisposed to falls due to proximal myopathy caused by vitamin D deficiency and secondary hyperparathyroidism (28-29). Furthermore, Marantes et al., (30) showed that the link between low 25(OH)D and increased fall risk may be due to weak muscle strength or other factors that affect neuromuscular function. There was a statistically significant association between low 1,25(OH)2D levels and low skeletal mass in both men and women. On the cellular level, vitamin D has been shown to enhance the influx of Ca++ which may facilitate muscular contraction. Therefore, vitamin D deficiency leads to proximal myopathy and predisposes to fall among the elderly (31).
In addition to the effect on muscle function, Annweiler et al., (32) reported that vitamin D deficiency in older people has been associated with impairments in the central nervous system, including cognitive decline and balance problems, and in the peripheral nervous system, including reduction of nerve conduction velocity. Vitamin D also affects neuromuscular control and neural coordination, and there is growing evidence supporting a neurotrophic effect of vitamin D. Buell et al., (33) revealed that vitamin D deficiency has been associated with a reduction of nerve conduction, and they reported that vitamin D appears to regulate neurotransmission by acting like a neurosteroid hormone. Therefore, improvements in balance performance could be mediated through a neural effect. It has been also suggested that vitamin D affects neuromuscular control and coordination and may act as a neurosteroid hormone.
Vitamin D deficiency in older adults may be due to lower expression of vitamin D receptors in peripheral tissues, low sunshine exposure, less skin capacity to synthesize vitamin D or poorer absorption of vitamin D with less activation in the kidneys and peripheral tissues (34,35,36). Also, serum levels of vitamin D decline significantly with aging, and this has been (37).
Finally, Dhesi et al., (13)have suggested that parathyroid hormone (PTH) may influence muscle mass and strength, independent of either 25(OH) D or 1, 25(OH) 2 D levels. Vitamin D deficiency is a recognized cause of secondary hyperparathyroidism. In animal models, administration of PTH has been shown to increase protein catabolism and decrease the number of type 2 muscle fibers, intracellular energy-rich phosphate compounds, and mitochondrial oxygen uptake (12-28). PTH also induces the production of IL-6 (38). Previous studies have linked elevated IL-6 levels with lower muscle strength (39)and poor physical performance (40).

Acknowledgements:
The authors thank all members of our medical staff who share and help us and for their enthusiastic collaboration in this work.
Corresponding author: Dr. Mohieldin M. Ahmed
Professor of Physical Medicine and Rehabilitation, Al-Hussein University Hospital, Cairo, Egypt. Email: drmohyahmed at gmail.com

Muscles twitched faster in those who had taken vitamin D supplements 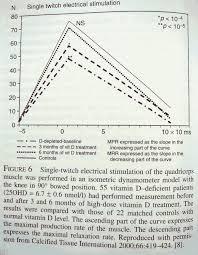 Seniors with adequate vitamin D could rebalance themselves 80% faster, and thus not fall as often – 2013         Printer Friendly PDF this page! Follow this page for updates
This page is in the following categories (# of items in each category)
Falls and Fractures 225