Low Vitamin D with dark skin, even if live closer to equator and higher altitude – Feb 2013

Methods: This cross-sectional study compares 129 boys from SAC with a 98% indigenous population, versus 116 boys from BA with a mixed population. Anthropometric measures and serum levels of glucose, lipids, insulin, and 25-hydroxyvitamin D [25(OH)D] were measured in May 2011 and May 2010 (fall season). Optimal, insufficiency, deficiency, and severe deficiency of vitamin D were defined as [25(OH)D[levels ≥ 75 nmol/L, 50 to < 75 nmol/L, 25 to < 50 nmol/L, and < 25 nmol/L respectively.

Conclusions: There was a higher prevalence of 25(OH)D deficiency in SAC versus BA boys, suggesting that dark skin, high altitudes, or genetic backgrounds could contribute to this problem. In addition, we found an inverse association between [[25(OH)D] and glucose concentration in apparently healthy children. Additional longitudinal studies should be done to confirm these findings. 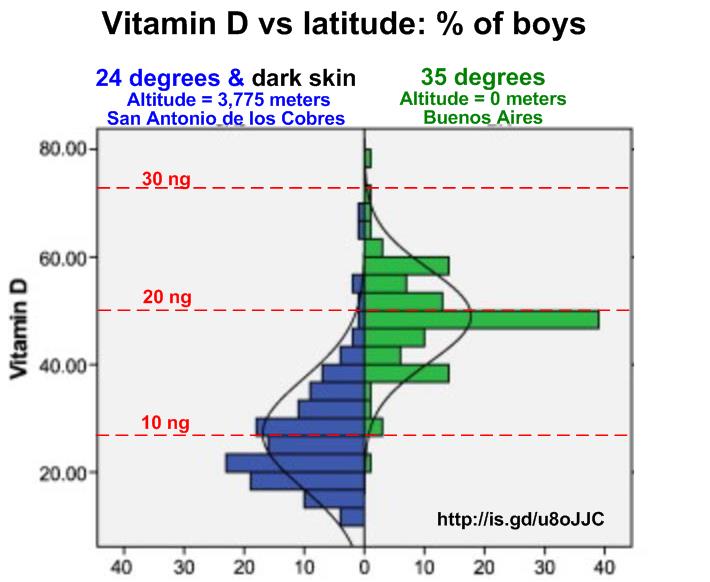 Observation: Much less vitamin D from the sun with dark skin, even though closer to the equator and at a higher altitude

Low Vitamin D with dark skin, even if live closer to equator and higher altitude – Feb 2013         Printer Friendly PDF this page! Follow this page for updates
This page is in the following categories (# of items in each category)
Skin - Dark 439

Interview of Dr. Robert Heaney, MD – March 2013Overview Dark Skin and Vitamin DVitamin D levels in Singapore, which is on the equator – March 2013