Back in 2010 VitaminDWiki noticed that about 1/3 of the women in a study were able to greatly lose weight by just taking vitamin D: no exercise nor calorie restriction required. Had wondered why. It appears that that the women who lost weight may have had one or two flawed FTO genes

Toward Personalized Prevention of Obesity: Can Vitamin D Negate the FTO Effect?

According to the World Health Organization, the worldwide prevalence of childhood overweight and obesity increased from 4.2% in 1990 to 6.7% in 2010 and it is expected to reach 9.1% in 2020 (1). This is alarming because BMI in childhood is associated with type 2 diabetes, hypertension, coronary heart disease, and mortality in adulthood (2). The obesity epidemic is no longer merely a problem in developed countries, but is now affecting developing countries as well. In fact, more than 30 million overweight children are living in developing countries compared with 10 million in developed countries (3). In the U.S., the Surgeon General issued the Call to Action to Prevent and Decrease Overweight and Obesity (4) in 2001 and the reduction of overweight and obesity was an objective of Healthy People 2010 (5). However, the ensuing public health efforts to address the obesity epidemic by promoting healthy eating and physical activity have had limited success thus far, with overweight and obesity rates continuing to increase. At the population level, the rise in overweight and obesity rates over the past few decades has been driven by shifts in the environment, such as the abundance of food (especially fast food and junk food), increasing portion sizes, city planning that promotes transportation by automobile versus walking or biking, and growth in technology that has led to increases in screen time. On an individual level, genetic factors contribute to obesity susceptibility. The strongest genetic risk factor identified thus far is the fat mass and obesity-associated gene (FTO). Interactions between behavioral and genetic factors may play an important role in obesity risk. These interactions can be capitalized to personalize medical practice.

In the current issue, Lourenco et al. (6) assessed the effect of FTO single nucleotide polymorphism (SNP) rs9939609 on changes in BMI during childhood in a population-based longitudinal study in the Brazilian Amazon and investigated whether these effects were modified by vitaminDstatus,a well-established correlate of BMI. They found that the A allele of FTOSNP rs9939609 was associated with significantly higher BMI gain during childhood. Moreover, the effect of the A allele was significantly stronger in individuals with insufficient concentrations of vitamin D in their blood (<75 nmol/L) and nearly absent in those with sufficient vitamin D. In other words, having adequate vitamin D negated the effect of the FTO risk allele. This relationship is conceptually similar to that seen in a meta-analysis of 218,166 adults where the effect of the rs9939609 A allele was stronger in individuals with another risk factor for obesity, physical inactivity, but weaker in those who were physically active (7).

Lourenco et al. (6) has several strengths. Most important are the longitudinal study design, with up to three study visits 2-3 years apart, and the direct measurement of BMI and serum vitamin D. Additionally, conducting the study in children with a mean age of 5 years at the baseline visit is important because this is the period when individuals start to become overweight (versus adolescence or adulthood). This would also be an opportune age to intervene with behavioral modifications, such as increasing vitamin D intake and/or physical activity, before an individual becomes overweight. One weakness of the study is that information on physical activity was not collected. As physical activity is associated with both BMI and vitamin D (through sun exposure), the interaction seen with vitamin D status could actually reflect an interaction with physical activity instead of vitamin D. This issue should be addressed by future studies.
Vitamin D supplementation
Figure 1—Vitamin D supplementation to remove obesity risk due to the FTO gene. 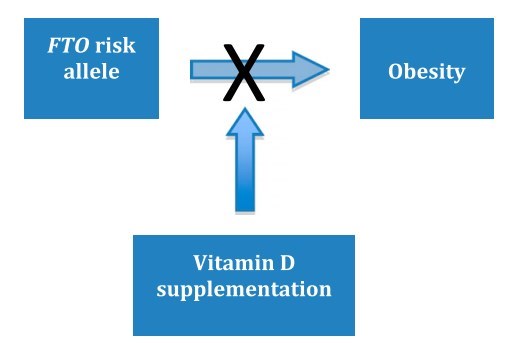 If the results of this study were replicated, they would have important clinical practice and public health implications because raising children's vitamin D concentrations to at least 75 nmol/L would remove the risk due to the FTO gene (Fig. 1). Vitamin D supplementation is inexpensive ($5-10 per month in the U.S.) and easy (most kids love the chewable fruit-flavored supplements) compared with most behavioral interventions for reducing obesity.
The role that gene-environment interactions play in health and disease has been largely overlooked. However, great promise for personalized medicine lies in uncovering these interactions because while one's genetic risk is not modifiable, behavioral factors are. Health care providers could use genetic information to personalize behavioral interventions. Pharmacogenomic panels are being developed and used in clinical laboratories and genomic information is increasingly included in electronic medical records to aid in clinical decision-making (8). To date, the decisions have involved pharmacologic treatment, particularly for cancer, but behavioral recommendations could also be tailored to individual patients. This holds promise for the prevention of obesity, type 2 diabetes, hypertension, and coronary heart disease in the future.

Duality of Interest. No potential conflicts of interest relevant to this article were reported.
References

Previous evidence suggests that variants in the fat mass and obesity-associated gene (FTO) affect adiposity in an age-dependent fashion in children, and nutritional factors may modify genotype effects. We assessed the effect of FTO rs9939609 on BMI and BMI-for-age Z score changes during childhood in a population-based longitudinal study in the Brazilian Amazon and investigated whether these effects were modified by vitamin D status, an important nutritional factor related to adiposity. At baseline, 1,088 children aged <10 years had complete genotypic and anthropometric data; 796 were followed up over a median 4.6 years. Baseline vitamin D insufficiency was defined as <75 nmol/L. We observed a 0.07 kg/m2/year increase in BMI and a 0.03 Z/year increase in BMI-for-age Z score per rs9939609 risk allele over follow-up (P = 0.01). Vitamin D status significantly modified FTO effects (P for interaction = 0.02). The rs9939609 risk allele was associated with a 0.05 Z/year increase in BMI-for-age Z score among vitamin D–insufficient children (P = 0.003), while no significant genetic effects were observed among vitamin D–sufficient children. Our data suggest that FTO rs9939609 affects child weight gain, and genotype effects are more pronounced among children with insufficient vitamin D levels. 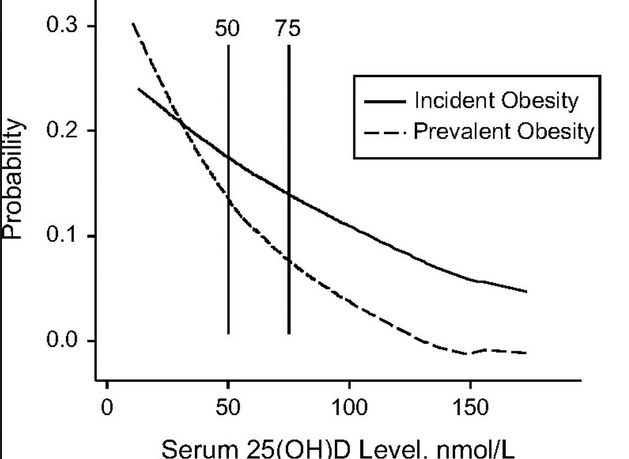 has the following chart, (Shading added by VitaminDWiki) PDF is attached at the bottom of this page 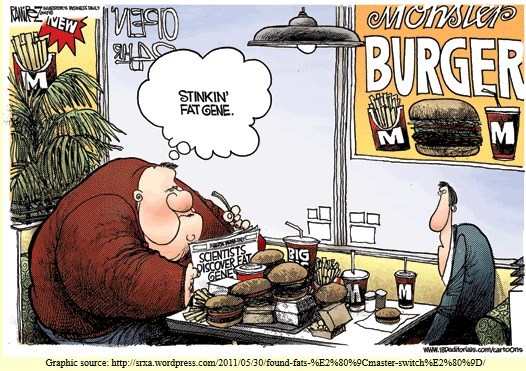 Vitamin D may block the obesity gene (FTO) – Jan 2014         Printer Friendly PDF this page! Follow this page for updates
This page is in the following categories (# of items in each category)
Obesity 387 Genetics 293