Introduction to Vitamin D for Seniors living far from the equator

This is an enhanced transcript of the 1 hour workshop held by Henry Lahore Sept, 2011
This page provides an linear read of the importance of vitamin D and has many hyperlinks to details/supportive information.
It can be read or printed out in 30 portrait pages in any of 64 languages.
To have Google translate the text just touch the down-arrow

in the upper right.
Workshop was held at the Evergreen Recreational Vehicle Park which is North West of Seattle, Washington
The RV park is located 48 degrees away from the Equator - on the cloudy side of Washington
The workshop audience of about 30 people ranged in age from 60 to 90
Half of audience were recreational vehicle 'snowbirds', who spend Fall thru Spring in Arizona, and migrate North to Western Washington in the Summer

CLICK HERE for just the large images - for future presentations 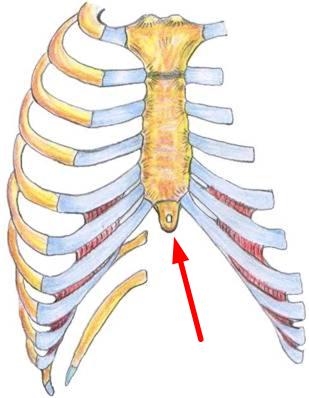 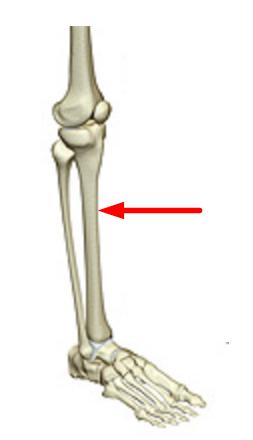 This section was added after presentation: to get the audience engaged

Are you vitamin D deficient?

Greg:"I got into Vitamin D because of another person, who told me how vitamin D had reduced his back pain."
Henry: As a result of Greg I have spent 2,000 hours and $1500 on making Vitamin D Wiki, which is the largest in the world.

Studies have shown that various diseases, such as Diabetes, vary with latitude (sun)

These are often called 'smile graphs'

People had started finding out about vitamin D 50 years ago when it was noticed that various diseases varied a lot with latitude. That is to say, when you were at the equator you had far less of the disease than when you were far from the equator, to the South or to the North.

Diabetes is one of those diseases. A few other additional diseases which vary with latitude are Multiple Sclerosis, dental caries, TB, and Seasonal Affective Disorder


Description of chart (especially for non-English readers)
The center of the X axis is the equator. The left is far South, and the Right is far North. Each point represents a country: The top (furthest from equator) having about 30X more diabetes than those at the equator 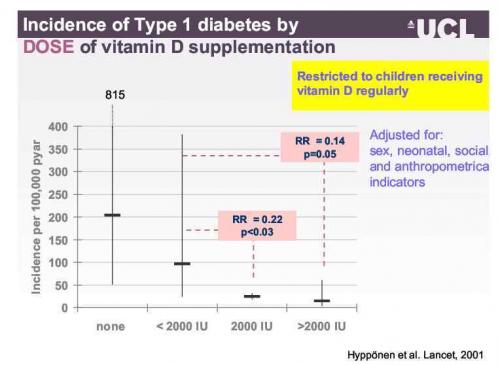 Example: a study showed a 7X decrease in Diabetes if take >2,000 IU of vitamin D


That is a study of what happened 50 years ago.
There are very similar recent results for results for both TypeI and TypeII diabetes CLICK HERE.

Text of chart for non-English readers
Type 1 diabetes. Restricted to children receiving vitamin D regularly
Adjusted for sex, neonatal, social, and anthropometrical indicators
Risk ratio was 0.14 for those taking > 2,000 IU of vitamin D vs those taking less than 2,000 IU
Incidence of diabetes for < 2,000 IU was 100 per 100,000 children
So incidence of diabetes for > 2,000 IU must be only 14 per 100,000 children

This is another of many “smile graphs”
The horizontal axis is latitude and the vertical axis is the rate of the disease.
The toothy section of the smile is at the equator, at the bottom middle of the graph, where there is very little incidence of the disease.
Disease rates go up a factor of 5 or 10 as you get far away from the equator.
Around here, in Western Washington, Diabetes, for example, is far more prevalent than in California
and far far more prevalent than near the equator.

Text of chart for non-English readers
The center of the X axis is the equator. The left is far South, and the Right is far North
Each point represents a country: The top (furthest from equator) having about 20X more MS than those at the equator 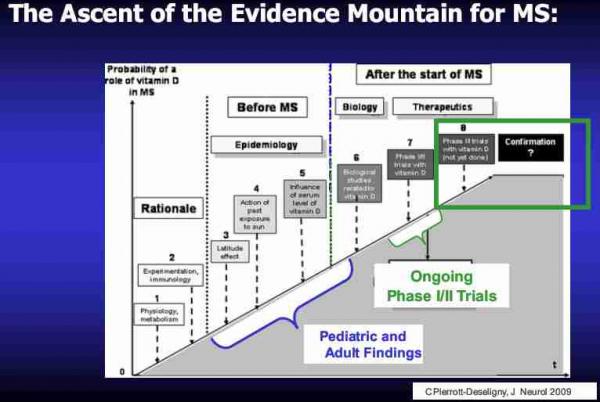 It shows the mountain of evidence which has been accumulated during the past few decades.
At the bottom of the mountain – the earliest indications found that sunshine and vitamin D could frequently prevent Multiple Sclerosis, then there were some tests that found that MS was frequently associated with low levels of vitamin D.
Then, going up the mountain, interventions found that if vitamin D was added that there would be less MS.
Now, most recently, clinical trials are underway to see if by adding vitamin D can MS be treated, not just prevented.
There have been over 100 successful studies of vitamin D and MS.
That said, it appears that UV or sunshine provides even more benefits than vitamin D – in both preventing and treating MS.
Science still does not know all of the benefits of sunshine – MS clearly shows us that it is more to UV than Vitamin D. 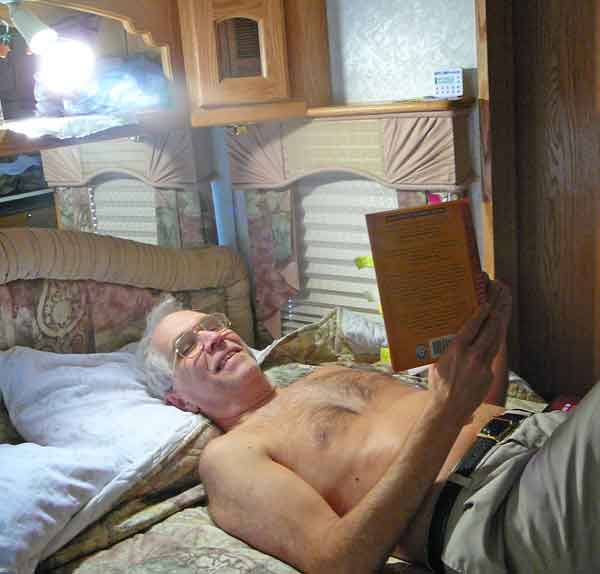 Personally, I hedge my bets and get both sunshine and vitamin D.

In the winter, when we get no sunshine, I mount a bulb above my bed which produces a spectrum of light which is so full that it includes UV.

This is NOT a conventional “full spectrum” bulb.
“Full spectrum” bulbs are not permitted by the US govt. to have any UVB which is produces vitamin D in your skin.
The bulb (shall I call it “super spectrum” instead of "full spectrum") which I use is one used to give vitamin D to pets such as reptiles and parrots.
The “super spectrum” bulb is safe to use since it has a spectrum very similar to that of the sun - thus you naturally squint when looking at the light.
Thus no worry about being blinded by UV light. CLICK HERE for details on Home/Office UV bulb
The purchase cost and the cost to use the “super spectrum” bulb
is far less than the cost of migrating or taking a vacation to the sunny South.

Methods to estimate the amount of UVB


CLICK HERE for free UVB Calculators on the web

How much UV am I getting (picture of the card, link to meters)

Here is a very low cost way to determine if there is enough UV to generate vitamin D in your skin. The little stripe on the card turns purple when it is exposed to UV – the deeper the purple, the stronger the ultraviolet light. I bought it to confirm that the UVB bulb which I use in the winter actually works. A zero cost way to determine if there is enough UV is to just look at the length of your shadow. No shadow = virtually no UV, If your shadow is as long as you are tall then you will get about 1/2 of the UV that you would at noon on a sunny summer day. During the winter your shadow will be pretty long even at noon, indicating how little UV/vitamin D might get then. (Exception – you will get more UV with reflections from snow, water, and other reflective surfaces. This is one of the reasons you can get a sunburn when skiing in the winter. The other reason is that there is more UV at higher altitudes)

I suggest that EVERY senior in Western Washington supplement with at least 4,000 IU of vitamin D

4,000 IU is the upper limit of what is currently the US recommendation. (suspect it will go higher within a few years). Many scientific groups recommend much more than 4,000 IU, especially to groups at high risk of being vitamin D deficient. The Institute of Medicine has rather conservative amounts, but their recommendations are much larger now than before (1997).
The upper limit (at the top of the graph) for all adults they very conservatively put at 4,000 IU of vitamin D per day. Just a year and a half ago I was unsure if I should take any more than 2,000 IU – which was their previous upper limit. After extensive study, I have found that virtually everyone can take 10,000 IU daily forever, especially if they balance their diet with co-factors.

The 4,000 IU amount is actually a very conservative upper limit for adults, and provides some amazing disease prevention benefits. I suggest that everyone in our park (senior citizens living in Western Washington) take that much of vitamin D daily. I happen to personally take much more, but 4,000 is nice. (Note: the upper limit for children aged 1-4 is 500 IU and children aged 4-8 is 3,000 IU). The lower limits - at the bottom of the graph is 600 IU up until age 71, at which point it goee up to 800 IU. This "minimum wage" is enough to stop rickets, but not enough to live on.

By way of reference: people getting a good amount of sun in a day, without getting burned, will get 20,000 IU of vitamin D – which is 5X more than what the Institute of Medicine says is the upper limit.
Go figure!

4,000 IU will raise the level of vitamin D in the blood to 40, which we can see on this graph is the level beyond which the magic starts to happen.
The horizontal axis is the level of vitamin D in the blood, not just in amount of the supplement.
The vertical axis shows the incidence of the disease compared to normal.
The top of the graph would be normal, whereas near to the bottom of the graph the incidence is only 20 percent of normal, that is, the incidence is 5X less.
This chart packs the results of many studies into an easy-to-read chart.
When vitamin D levels are higher than 40, many studies have found substantial reductions in heart attacks, falls, fractures, MS, Breast Cancer, Renal Cancer, All Cancers, and type 1 Diabetes.
(You can click on the slide to get more detail as well as have the text in the chart available for translation.)
In the lower left of the chart you can see that if you have a vitamin D level in your body of more than 20 you will greatly decrease the chance of getting rickets.

Unfortunately, it had been found that most elderly living in regions from the equator, such as Washington State, have vitamin D levels less than 20 – and so get none of the benefits shown on the right side of the graph.

one of many Vitamin D Random Controlled Trials

1200 Women were in a vitamin D clinical trial for 4 years,

Those women in the trial branch which took 1100 IU of vitamin D and Calcium had four times less incidence of all kinds of Cancer.
These women were in their mid 60’s.

The middle line shows some reduction in all forms of Cancer for those women who just got just Calcium with no vitamin D.
This study is as good as it gets – it was a randomized, double blind, placebo controlled clinical trial.
Chart was shown at CDC Grand Rounds Aug 2010
Full details of the trial can be found HERE.
This clinical trial used only 1100 IU of vitamin D.
It turns out that as you get more and more vitamin D that you get less and less Cancer.
The results are not in yet for clinical trials with 4,00 IU of vitamin D, but I suspect that they will find significantly more than a 6X reduction in Cancer.
CLICK HERE for a glance at the many high dose vitamin D clinical trials.

Seniors Vitamin D Workshop - Sept 2011         Printer Friendly PDF this page! Follow this page for updates
This page is in the following categories (# of items in each category)
Seniors 367 About D - more info. 114 Overviews 77