BACKGROUND:
Resveratrol (3,5,4'-trihydroxy-trans-stilbene) is a natural antioxidant polyphenol able to exert a wide range of biological effect on several tissues. Despite its important beneficial properties, it has a low water solubility, which limits its therapeutic applications in humans. Resveratrol also acts as a phytoestrogen that modulates estrogen receptor (ER)-mediated transcription. In addition, it has been shown that ovarian tissues benefit greatly from vitamin D3, which exerts its beneficial effects through VDR receptors. The aim was to evaluate the cooperative effects of resveratrol combined with vitamin D3 on ovarian cells and tissues and some other organs as well. Moreover, the modulation of specific intracellular pathways involving ER and VDR receptors has been studied.

METHODS: The experiments were performed both in vitro and in vivo, to analyze cell viability, radical oxygen species production, signal transductions through Western Blot, and resveratrol quantification by HPLC.

CONCLUSIONS: Such results could be used as a fundamental data for the development of new therapies for gynecological conditions, such as hot-flashes.

BACKGROUND AND AIM: Resveratrol shows remarkable anti-inflammatory activities in experimental models. This study aims to evaluate the effect of resveratrol, as an adjuvant with meloxicam (Mlx), on the pain and functional activity during a 90-day period and monitor the adverse effects on kidney and liver functions, lipid profile, and hematological markers.

PATIENTS AND METHODS:
This study was a double-blind, placebo-controlled, randomized multi-center study that involved 110 patients with knee osteoarthritis (OA) and was performed at Sulaimani City, Iraq, from December 2016 to September 2017. To assess the effects of Mlx with or without resveratrol, pain severity and functional disability were evaluated at baseline and after 90 days using the Western Ontario and McMaster Universities Osteoarthritis Index. Fasting blood was collected to evaluate the lipid profile markers, hematological picture, and liver and kidney functions, in addition to vitamin D level.

RESULTS: Resveratrol significantly improves pain, functions, and associated symptoms compared with placebo. The clinical and biochemical markers indicated that 500 mg/day of resveratrol, as an adjuvant with Mlx, is safe and well tolerated by the knee OA patients.

CONCLUSION: Resveratrol, as an "add-on" medication with Mlx, was superior in terms of safety and efficacy to Mlx alone for the treatment of pain and improvement of physical function in patients with knee OA.

The hypothesis is formulated and presented that resveratrol and vitamin D have important mutual processes, interactions and induced effects that if not taken into account could seriously jeopardize the interpretation of their current and future preclinical, epidemiological and clinical studies.

In support of this hypothesis, evidence is presented that resveratrol and vitamin D mutually share some of the same biochemical processes and mechanisms as well as the fact that they can each affect some of the same diseases and maladies. Copyright © 2011 Elsevier Ltd. All rights reserved.

PDF can be read at low cost at DeepDive

The 1,25-dihydroxyvitamin D3 (1,25D) hormone is derived from vitamin D generated in skin or obtained from the diet, and binds to and activates the vitamin D receptor (VDR) in target tissues including kidney, colon/small intestine, and bone/muscle. We tested resveratrol for its ability to modulate VDR signaling, using vitamin D responsive element (VDRE) and mammalian 2-hybrid (M2H) transcriptional system technology. Via VDRE-based assays in kidney, colon and myoblast cells, VDR-mediated transcription was activated by resveratrol, and a cooperative effect on transactivation was observed with resveratrol plus 1,25D. The M2H assay revealed a modest, resveratrol-induced dimerization of VDR with its retinoid X receptor (RXR) heteropartner. Cells treated with both resveratrol and 1,25D displayed synergistic stimulation of VDR-RXR heterodimerization, while resveratrol antagonized rexinoid-mediated RXR-RXR homodimerization. Increased transactivation in response to resveratrol was also observed with a subset of other nuclear receptors and their respective cognate responsive elements. Evaluation of wild-type versus a ligand-binding domain mutant VDR revealed that hormone-responsiveness to 1,25D was severely depressed, while the response to resveratrol was only moderately attenuated. Moreover, radiolabeled 1,25D-displacement assays demonstrated an increase in VDR-bound 1,25D in the presence of resveratrol. Thus, resveratrol may affect VDR and other nuclear receptors indirectly, likely via the ability of resveratrol to: (1) potentiate 1,25D binding to VDR; (2) activate RXR; and/or (3) stimulate SIRT1, an enzyme known to deacetylate nuclear receptors. The results of this study elucidate a possible pathway for crosstalk between two nutritionally derived lipids, vitamin D and resveratrol, both of which converge on VDR signaling.

Publisher will rent PDF for $6

Notes after quick read - 4X increase in Vitamin D response by cells when resveratrol was added to a poorly functioning VDR
Many charts show response of the order of 4X, but unsure of the vertical axis 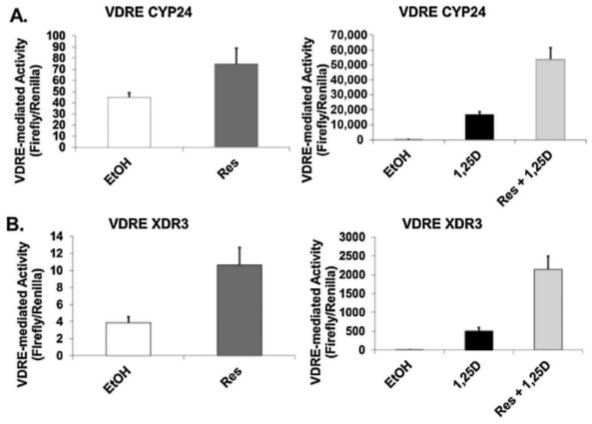 OBJECTIVES: Patients with type 2 diabetes (T2DM) are at increased fracture risk. Resveratrol has shown beneficial effects on bone health in few studies. The aim of this trial was to investigate the effects of resveratrol on bone mineral density (BMD) and on calcium metabolism biomarkers in T2DM patients.

RESULTS: At follow-up, calcium concentrations increased in all patients, while within-group variations in alkaline phosphatase were higher in both resveratrol arms, and 25-hydroxy vitamin D increased in the Resv500 arm only, without between-group differences. Whole-body BMD significantly decreased in the placebo group, while whole-body BMC decreased in both the placebo and Resv40 arms. No significant changes in BMD and BMC values occurred in the Resv500 arm. The adjusted mean differences of change from baseline were significantly different in the Resv500 arm vs placebo for whole-body BMD (0.01 vs -0.03 g/cm2, p = 0.001), whole-body BMC (4.04 vs -58.8 g, p < 0.001), whole-body T-score (0.15 vs -0.26), and serum phosphorus (0.07 vs -0.01 µmol/L, p = 0.002). In subgroup analyses, in Resv500 treated-patients BMD values increased to higher levels in those with lower calcium and 25-hydroxy vitamin D values, and in alcohol drinkers.

CONCLUSIONS: Supplementation with 500 mg resveratrol prevented bone density loss in patients with T2DM, in particular, in those with unfavorable conditions at baseline.

The Role of Resveratrol in Cancer Therapy - Dec 2017 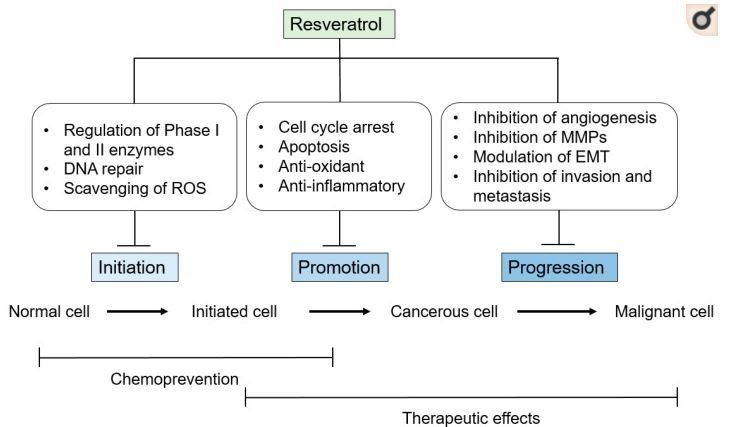 Resveratrol and Cardiovascular Diseases - May 2016

The increased incidence of cardiovascular diseases (CVDs) has stimulated research for substances that could improve cardiovascular health. Among them, resveratrol (RES), a polyphenolic compound notably present in grapes and red wine, has been involved in the "French paradox". RES is known for its antioxidant and anti-inflammatory properties and for its ability to upregulate endothelial NO synthase (eNOS). RES was able to scavenge (•)OH/O₂(•-) and peroxyl radicals, which can limit the lipid peroxidation processes. Moreover, in bovine aortic endothelial cells (BAEC) under glucose-induced oxidative stress, RES restored the activity of dimethylargininedimethylaminohydrolase (DDAH), an enzyme that degrades an endogenous inhibitor of eNOS named asymmetric dimethylarginine (ADMA). Thus, RES could improve (•)NO availability and decrease the endothelial dysfunction observed in diabetes. Preclinical studies have made it possible to identify molecular targets (SIRT-1, AMPK, Nrf2, NFκB…); however, there are limited human clinical trials, and difficulties in the interpretation of results arise from the use of high-dose RES supplements in research studies, whereas low RES concentrations are present in red wine. The discussions on potential beneficial effects of RES in CVDs (atherosclerosis, hypertension, stroke, myocardial infarction, heart failure) should compare the results of preclinical studies with those of clinical trials.

Resveratrol is a pleiotropic phytochemical belonging to the stilbene family. Though it is only significantly present in grape products, a huge amount of preclinical studies investigated its anticancer properties in a plethora of cellular and animal models. Molecular mechanisms of resveratrol involved signaling pathways related to extracellular growth factors and receptor tyrosine kinases; formation of multiprotein complexes and cell metabolism; cell proliferation and genome instability; cytoplasmic tyrosine kinase signaling (cytokine, integrin, and developmental pathways); signal transduction by the transforming growth factor-β super-family; apoptosis and inflammation; and immune surveillance and hormone signaling. Resveratrol also showed a promising role to counteract multidrug resistance: in adjuvant therapy, associated with 5-fluoruracyl and cisplatin, resveratrol had additive and/or synergistic effects increasing the chemosensitization of cancer cells. Resveratrol, by acting on diverse mechanisms simultaneously, has been emphasized as a promising, multi-target, anticancer agent, relevant in both cancer prevention and treatment. 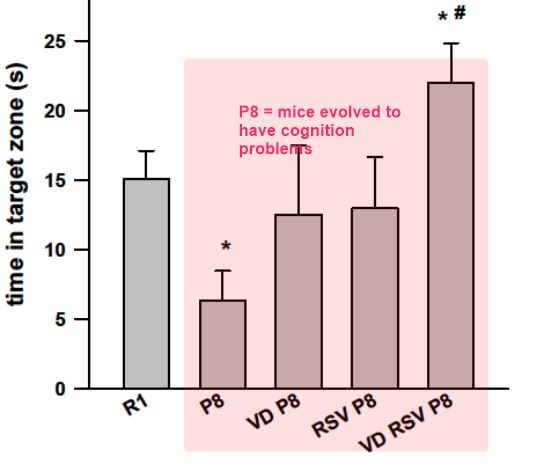 Source does not allow copying even title 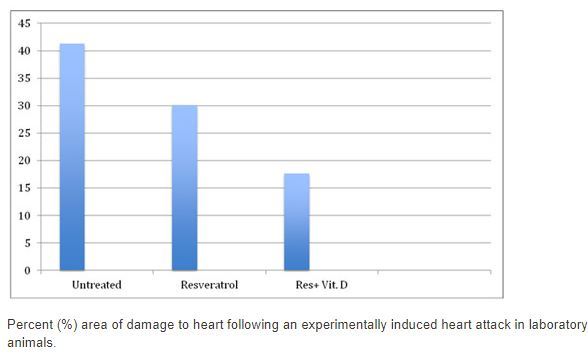 Resveratrol gets vitamin D to cells even if poor vitamin D receptor         Printer Friendly PDF this page! Follow this page for updates
This page is in the following categories (# of items in each category)
Interactions with Vitamin D 106 Vitamin D Receptor 442 Resveratrol 43