A randomized, double-blind, placebo-controlled trial of resveratrol for Alzheimer disease 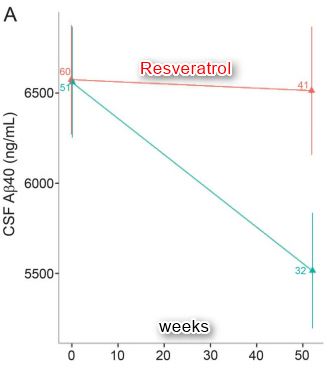 Methods: Participants (n 5 119) were randomized to placebo or resveratrol 500 mg orally once daily (with dose escalation by 500-mg increments every 13 weeks, ending with 1,000 mg twice daily). Brain MRI and CSF collection were performed at baseline and after completion of treatment. Detailed pharmacokinetics were performed on a subset (n 5 15) at baseline and weeks 13, 26, 39, and 52.

Results: Resveratrol and its major metabolites were measurable in plasma and CSF. The most common adverse events were nausea, diarrhea, and weight loss. CSF Ab40 and plasma Ab40 levels declined more in the placebo group than the resveratrol-treated group, resulting in a significant difference at week 52. Brain volume loss was increased by resveratrol treatment compared to placebo.

Conclusions: Resveratrol was safe and well-tolerated. Resveratrol and its major metabolites penetrated the blood–brain barrier to have CNS effects. Further studies are required to interpret the biomarker changes associated with resveratrol treatment.

Classification of evidence: This study provides Class II evidence that for patients with AD resveratrol is safe, well-tolerated, and alters some AD biomarker trajectories. The study is rated Class II because more than 2 primary outcomes were designated.

Note: The study does not include the word VITAMIN

See also Mercola on the web

Resveratol helps vitamin D bind to cellsAlzheimer’s associated with Vitamin D and Vitamin D receptor – video and pdf ...Resveratrol gets vitamin D to cells even if poor vitamin D receptorImmune system is aided by red grapes, blueberries, both of which increase Vit...Reversal of cognitive decline with multitherapy (not monotherapy) – Sept 2014