The word VITAMIN does not occur once in the PDF
Resveratrol improves health (Vitamin D receptor, etc.) 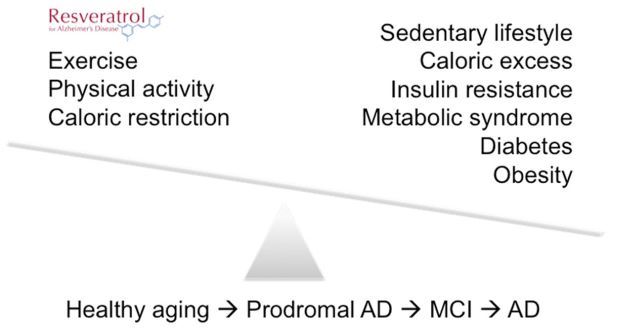 Caption Alzheimer’s disease (AD) as a metabolic disorder. Risk factors for mild cognitive impairment (MCI) and AD with aging include caloric excess and sedentary lifestyle, leading to insulin and glucose dysregulation. In contrast, exercise and caloric restriction (or intermittent fasting) may delay or prevent cognitive decline with aging. Prodromal AD refers to individuals who are cognitively intact but have a positive AD biomarker. Resveratrol may mimic effects of caloric restriction by activation of sirtuins—deacetylases that link energy balance (via NAD+/NADH regulation) to altered gene transcription (via epigenetics). Thus, although classically considered as non-modifiable risk factors for AD, genetics and aging may be modifiable. 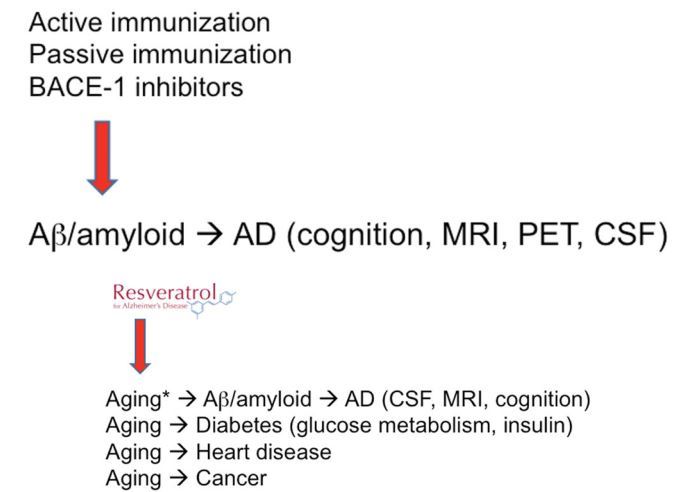 The amyloid hypothesis suggests that the progressive accumulation and deposition of central nervous system (CNS) amyloid with aging is the proximate cause of Alzheimer's disease (AD). Thus, targeting molecular mechanisms of aging may be a viable treatment approach. Caloric restriction prevents diseases of aging, including AD, in animal models, perhaps by activation of sirtuins. The sirtuins (e.g., mammalian SIRT1) are deacetylases that link energy balance (NAD+ /NADH) to regulation of gene transcription. Resveratrol is a potent activator of SIRT1, and thus may mimic caloric restriction to prevent diseases of aging. We conducted a randomized, double-blind, placebo-controlled, phase II trial of resveratrol for individuals with mild-to-moderate AD. Resveratrol

Further studies are needed to determine the safety and efficacy of resveratrol and the validity of this approach in the treatment and prevention of AD and other diseases of aging.

Further studies are now needed to determine whether resveratrol and similar polyphenols may be beneficial for AD or other disorders of aging. Another phase II study is warranted to examine the safety and efficacy of higher doses and improved formulations with better pharmacokinetics and bioavailability. Similarly, as with the anti-Ap antibody and BACE1 inhibitor studies, the next trial of resveratrol may enroll a different study population, such as those with prodromal AD or normal older individuals at risk (e.g., earlier along the AD spectrum). The working hypothesis is that resveratrol may delay or prevent AD onset when given to subjects with prodromal AD or cognitively normal individuals at risk. Alternatively, novel patentable molecules—sirtuin activators (STACs) and resveratrol mimetics—may be developed. Instead of approaching each disease of aging individually, with one or more drugs prescribed for each, targeting regulatory molecules of aging per se may target several diseases of aging simultaneously, thus minimizing polypharmacy and its associated risks and costs. While neurotransmitter-based therapies are the first wave of AD treatments, and amyloid agents the second wave (perhaps), the next wave may target aging mechanisms.

(Cached) Printer Friendly PDF this page! Follow this page for updates
This page is in the following categories (# of items in each category)
Cognitive 287 Resveratrol 33
Edit Comments Files 3