Melatonin secretion is negatively correlated with alterations in serum 25-OH-D in IFN-β treated patients with MS. The finding suggests that melatonin should be considered as a potential mediator of vitamin D neuro-immunomodulatory effects in patients with MS.

Multiple sclerosis (MS) is the most common neurological disease associated with functional disabilities in young adults. It is well known that MS prevalence has an impressive geographical gradient, with significantly higher incidence with increasing latitude (Simpson et al., 2011). Different sunlight exposure and the resulting variation in vitamin D (vit D) production have been advocated as the explanation for this environmental gradient (Disanto et al., 2012 and Munger et al., 2006).Part of these effects is related to vit D mediated immunomodulation such as promotion of an anti-inflammatory cytokine profile and induction of regulatory T cells (Smolders et al., 2008 and Smolders et al., 2009). In experimental autoimmune encephalomyelitis (EAE), the animal model of MS, vit D is able to suppress the disease process and to abolish EAE induction (Cantorna et al., 1996 and Lemire and Archer, 1991).Recently, it became clear that decreased sunlight exposure remains significantly associated with MS risk even after controlling for vit D levels, thus implying that vit D is not the only mediator of the beneficial influence of sunlight on MS (Hart et al., 2011 and Lucas et al., 2011). Melatonin is another sunlight dependent hormone, with suggested immune-regulatory effects, such as controlling the production of cytokines and leukotrienes and regulating the lifespan of leukocytes by interfering with apoptotic processes (Radogna et al., 2010). Moreover, its anti-oxidative properties promote scavenging of oxidative stress in inflamed tissues (Radogna et al., 2010).Both vit D and melatonin are candidate intermediates for the influence of sunlight on MS (Mehta, 2010). We hypothesized that these two hormones might have mutual relationship because they are both light-dependent mediators and share immunomodulatory properties. Thus, homeostatic mechanisms might exist to keep them both coordinated. Accordingly, we aimed to assess the effects of vit D supplementation on melatonin secretion in patients with MS.

The study took place at north Israel, latitude 32.8° north. Relapsing remitting MS (RRMS) patients who attended our clinic for routine follow-up from November 3rd, 2010 to March 4th, 2011 were offered to participate. Inclusion criteria were: at least 18 years of age, IFN-β treatment of at least 4 months duration, 25-hydroxy-vitamin-D (25-OH-D) blood levels below 75 nmol/l, EDSS score up to 7 and signed informed consent.Exclusion Criteria consisted of abnormalities of vit D related hormonal system other than low dietary intake or decreased sun exposure. Participation after enrolment was terminated in case of withdrawal of IFN-β treatment from any reason, pregnancy, hypercalcemia or patient’s decision. The study was approved by the Helsinki Committee of Carmel Medical Center, Haifa, Israel. All participants signed informed consent. The trial was registered at ClinicalTrials.gov ID: NCT01005095.

There were two interventional groups. The “high dose” group was orally treated with a bottle containing 75,000 IU of cholecalciferol (vit D3) solution every 3 weeks plus 800 IU of vit D3 by daily tablets (total of 4370 IU/d). The “low dose” group received 800 IU of vit D3 by daily tablets, along with the content of a bottle of placebo solution every 3 weeks (total of 800 IU/d).After cholecalciferol (vit D3) is ingested, part of it is stored in fat tissue and is subsequently gradually released for about 3 months. Part of the ingested and storage released cholecalciferol undergo 25-hydroxylation in the liver (Bringhurst et al., 2008). The half-life of 25-OH-D is about 2–3 weeks (Bringhurst et al., 2008). Basic pharmacology suggests that circulating half life is a suitable dosing interval for a drug and that after five half lives serum levels are at steady state (Buxton, 2006). Because of the long half life of 25-OH-D it is expected that after 3 months supplementation, at steady state, administration of 75,000 IU every 3 weeks plus 800 IU daily of vit D3 will produce the same 25-OH-D serum levels as if 4370 IU per day of vit D3 had been given. The equivalence of daily and monthly vit-D3 administration has been shown empirically (Binkley et al., 2011 and Ish-Shalom et al., 2008).The assignment to groups was randomly set in advance, according to recruitment order. vit D supplementation was double-blind in this study – both participants, physicians and investigators were unaware of the ingredients of the solution bottles.

Patients’ characteristics including age, gender, ethnicity, BMI (Body mass index), MS disease characteristics and use of anti depressants were registered at recruitment. Health related quality of life (HRQoL) was evaluated at baseline and at the completion of the study, using the ‘Functional assessment of MS’ questionnaire (FAMS), which is divided to six subscales: mobility, symptoms, emotional well-being (depression), general contentment, thinking/fatigue, and family/social well-being (Cella et al., 1996). The depression score runs between 0 and 28. High score denotes decreased mood.Serum 25-OH-D and calcium levels were measured at baseline and after 3 months and 1 year from enrolment. Total vit D was measured by chemiluminescent immunoassay (CLIA) technology and was tested on the Liaison analyzer (DiaSorin S.p.A., Italy) for the quantitative determination of 25-hydroxy-vitamin-D.Urine was collected over a 12-h nighttime (19:00–07:00) period at baseline, after 3 months and by the end of 1 year. Aliquots were frozen at −80 °C until analyzed. Nighttime Melatonin metabolite 6-sulphatoxy-melatonin (6-SMT) levels were measured using a highly specific ELISA assay (IBL International, Biotest Ltd., Israel).Night durations at each date of urine collection were calculated as the time between sunset and sunrise at the city of Haifa, which were obtained by using the ‘suncalc.net’ application. (Agafonkin, 2009).

Data analysis was performed using the SPSS statistical package (SPSS Inc., Chicago, IL, USA). Comparisons of patients’ characteristics between study groups were done by Student’s t-test or Mann–Whitney test, according to data distribution. Categorical variables were compared using Chi square or Fisher’s exact test. Comparisons of serum 25-OH-D and urine 6-SMT at various times were done by mixed model ANOVA with Bonferroni adjustment for multiple comparisons. This procedure takes into account the intra-correlation of repeated measurements carried out at the same subject and does not exclude subjects with incomplete data at follow-up. Changes in FAMS depression scores in each dosage group were analyzed by Wilcoxon Signed Rank test. Changes in night duration between baseline and 3 months were compared with paired Student’s t-test. Spearman’s Correlation analysis was used to estimate the association between percent change in serum 25-OH-D and percent change in overnight urine 6-SMT. Pearson’s Correlation analysis was used to estimate the associations between BMI and 25-OH-D, BMI and 6-SMT, age and 6-SMT and between FAMS depression scores and 6-SMT. Summary statistics are given as mean ± standard deviation and median and (range). 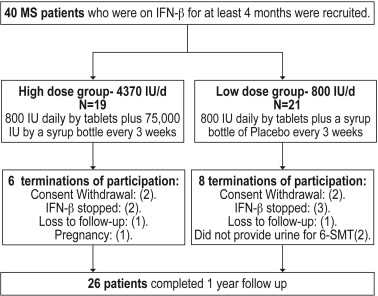 :;a:
Summary statistics are mean ± standard deviation and median (range).

:Fig. 2. Serum 25-hydroxy-vitamin-D levels. With high dose, 25-OH-D levels were significantly above baseline at all time points. Notably, a significant decrease in serum 25-OH-D was found between 3 months and 1 year of follow up (P = 0.038). Low dose supplementation resulted in significantly increased 25-OH-D levels compared to baseline only at 3 months.
:Figure options
Low dose vit D supplementation resulted in significantly increased 25-OH-D levels compared to baseline only at 3 months t(20) = 5.72, P < 0.0001, however average level did not reach 75 nmo/l. A trend towards reduced 25-OH-D levels at 1 year compared to levels after 3 months, was also apparent in this dosage group, albeit not statistically significant t(18.7) = 2.17, P = 0.09.All participants’ 25-OH-D levels by the end of the study were significantly negatively correlated to BMI Pearson’s r = −0.45, P = 0.015.Urine melatonin metabolite levels in the two intervention groups are shown in Fig. 3. One patient, in the low dose group, had 414% increases in urine melatonin metabolite at 1 year compared to 3 months. This increment was higher than the median change in urine 6-SMT at that period, by 10.9 times the inter-quartile range. This patient had severe limb ataxia, which might have hampered the ability to collect urine accurately. Therefore, 6-SMT data from this patient was excluded from analysis, as an outlier.; 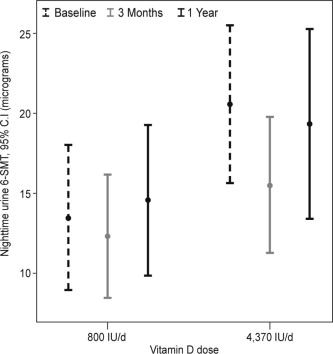 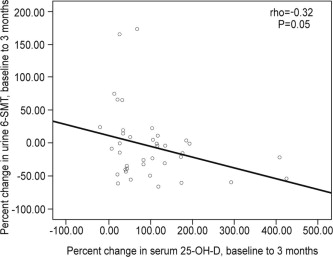 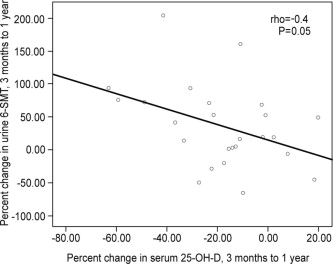 This study was supported by Merck Serono – Israel and Bayer Schering – Israel. Vitamin D supplements and placebos were donated by CTS – Israel and Altman – Israel.

Neurodegeneration in multiple sclerosis: the role of oxidative stress and excitotoxicity

Modulation of the immune system by UV radiation: more than just the effects of vitamin D?

Circadian rhythms of 6-sulphatoxy melatonin, cortisol and electrolyte excretion at the summer and winter solstices in normal men and women

Role of the melatonin system in the control of sleep: therapeutic implications

Biogenic amines in the reduction of oxidative stress: melatonin and its metabolites

Seasonal variation in serum concentrations of reproductive hormones and urinary excretion of 6-sulfatoxymelatonin in men living north and south of the Arctic Circle: a longitudinal study

Multiple sclerosis: relationship between seasonal variations of relapse and age of onset

Latitude is significantly associated with the prevalence of multiple sclerosis: a meta-analysis

Vitamin D as an immune modulator in multiple sclerosis, a review

New title for this page May 2019 eliminating the date caused the visitor count to reset.
There have actually been 7679 visitors to this page since it was originally made