The concept that the gut microbiota serves as a virtual endocrine organ arises from a number of important observations. Evidence for a direct role arises from its metabolic capacity to produce and regulate multiple compounds that reach the circulation and act to influence the function of distal organs and systems. For example, metabolism of carbohydrates results in the production of short chain fatty acids (SCFAs), such as butyrate and propionate, which provide an important source of nutrients as well as regulatory control of the host digestive system. This influence over host metabolism is also seen in the ability of the prebiotic inulin is to influence production of relevant hormones such as glucagon like peptide-1 (GLP-1), peptide YY (PYY), ghrelin and leptin. Moreover, the probiotic L. rhamnosus PL60, which produces conjugated linoleic acid, has been shown to reduce body weight gain and white adipose tissue without effects on food intake. Manipulating the microbial composition of the gastrointestinal tract modulates plasma concentrations of tryptophan, an essential amino acid and precursor to serotonin, a key neurotransmitter within both the enteric and central nervous systems. Indirectly and through as yet unknown mechanisms, the gut microbiota exerts control over the hypothalamic-pituitary-adrenal axis (HPA). This is clear from studies on animals raised in a germ-free environment, who show exaggerated responses to psychological stress, which normalises following monocolonisation by certain bacterial species including B. infantis. It is tempting to speculate that therapeutic targeting of the gut microbiota may be useful in treating stress-related disorders and metabolic diseases. 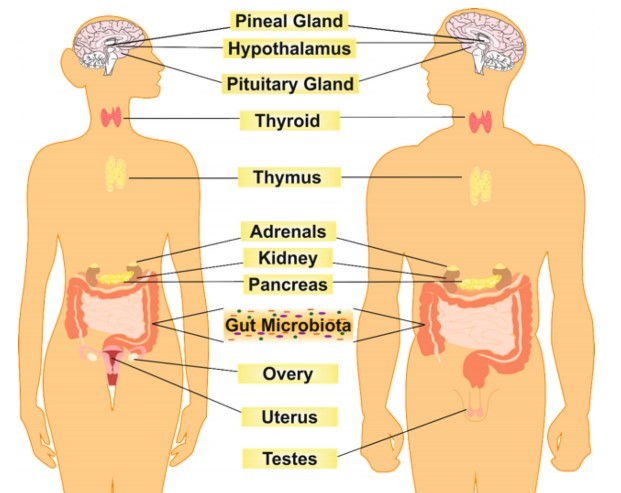 Gut Microbiota: The Neglected Endocrine Organ (vitamin D not mentioned) – July 2014         Printer Friendly PDF this page! Follow this page for updates
This page is in the following categories (# of items in each category)
Gut 175 Microbiome 26

Antibiotics and Vitamin D are associated with many of the same diseasesVitamin D, immunity and microbiome – Dec 2014