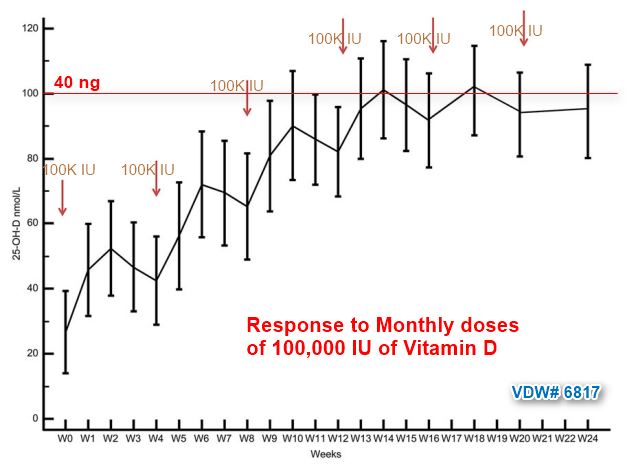 BACKGROUND:
We previously reported that oral cholecalciferol (CCF) (100 000 IU) taken monthly by haemodialysis patients is effective in accomplishing serum 25-hydroxyvitamin D (25-D) levels >75 nmol/L in >80% of cases. We aimed to study the weekly kinetecs of serum 25-D in HD patients receiving oral CCF during the first 6 months of HD.

METHODS:
All new HD patients at our dialysis centre during the autumn months of 2011-2014 were offered entry into the study if their baseline serum 25-D level was <75 nmol/L. Oral CCF (100 000 IU) was administrated monthly during an HD session. The kinetic study included weekly serum sampling for 16 weeks, and every other week thereafter. Biological and treatment data were compared between baseline and 6 months after starting HD and CCF. Patients who required calcimimetics, calcitriol and analogues were excluded from the study.

RESULTS:
The data from 21 patients were available for analysis. These patients had a

Serum 25-D levels increased from 26.8 ± 13 nmol/L at baseline to 102.3 ± 24 nmol/L after 6 months (P < 0.001). Serum calcium and albumin levels both increased during the study period. Serum phosphate level did not change significantly, and serum parathyroid hormone (PTH) level decreased. Serum 25-D level reached a plateau after 11 weeks of oral CCF.
Two patients (9.5%) with low baseline 25-D values, had a stable 25-D level <75 nmol/L after 6 months. No peak effect was observed 48 h after the first dose of CCF.

CONCLUSION:
The oral administration of 100 000 IU CCF once a month maintains a normal serum level in 90% of HD patients. Serum 25-D level reaches a plateau level after 12 weeks of therapy.

Graph of weekly response to monthly vitamin D supplementation – Aug 2015         Printer Friendly PDF this page! Follow this page for updates
This page is in the following categories (# of items in each category)
Intervention - non daily 209