A glimpse of vitamin D status in Mainland China

As an essential dietary micronutrient, vitamin D plays a pivotal role in promoting calcium absorption in the intestine and maintaining a healthy skeletal system throughout life. Beyond bone health, an emerging volume of scientific studies shows that vitamin D also may provide cardiovascular, metabolic, and immunologic benefits and reduce mortality. To our knowledge, in mainland China no national surveys have been conducted to date to depict the overall vitamin D status in the population. Therefore, the purpose of this contribution was to provide the best possible evaluation of vitamin D deficiency/insufficiency in China by reviewing publications that measured plasma/serum 25-hydroxyvitamin-D (25OHD) levels in various age groups and in different areas of China from January 2000 to June 2012. From these investigations conducted throughout the country and from newborns to adults to the elderly, it has been found that vitamin D deficiency/insufficiency is prevalent in the Chinese population in almost all age groups and areas if individuals are not taking vitamin D–fortified products/supplements or are lacking sufficient sunshine exposure. Some studies showed severe deficiency (25OHD <25 nmol/L) in Nanjing (north latitude 31) during the winter months and in Beijing (north latitude 40) in the fall. This unoptimistic situation represents a significant but modifiable public health risk that deserves greater attention and more efficient and timely management.

Vitamin D is an essential dietary micronutrient because it plays a pivotal role in aiding intestinal absorption of calcium and phosphorus, therefore, exerting a favorable effect on bone mineralization and musculoskeletal health. Other than the classical effects of vitamin D on calcium and phosphorus metabolism and on bone health and muscle strength, an emerging volume of scientific studies also shows that vitamin D deficiency/insufficiency may increase the risks for developing non-skeletal disorders such as cardiovascular disease, type 2 diabetes, autoimmune disease, selected cancers, high blood pressure, depression, and overall mortality 1 and 2.

In Mainland China, there has, to our knowledge, been no systematic national survey to depict the landscape of vitamin D deficiency, insufficiency, and adequacy. However, research interests in the topic developed and continued to mount over the past decade(s), and as a result, circulating vitamin D status has been examined in various populations and regions.

The purpose of this contribution is to provide best possible overview from these studies that measured circulating 25-hydroxyvitamin-D (25OHD) levels in Mainland China. Serum or plasma 25(OH)D concentration is widely accepted as the best biomarker to define vitamin D status, because it reflects both the endogenous vitamin D photosynthesis by skin in response to sun exposure and vitamin D ingestion via digestive track from dietary sources 3. To this end, peer-reviewed original English publications from January 2000 to November 2012, which examined 25(OH)D values, were retrieved from databases and analyzed. Studies were not included when the number of participants was less than 30 and when they had known overt vitamin D intake. A deficient vitamin D level is defined as being 25(OH)D <25 nmol/L; insufficient <50 nmol/L; desirable >75 nmol/L (as recommended by International Osteoporosis Foundation IOF, the Endocrine Society, and many scientists in the field) 4. Therefore, levels between 50 nmol/L and 75 nmol/L were defined as inadequate (although they are defined as adequate by the Institute of Medicine). These cut-off points are also in line with the recently published global vitamin D status map by the IOF 5 (http://www.iofbonehealth.org/facts-and-statistics/vitamin-d-studies-map).

Vitamin D status in the youth

M, male; F, female; All, the blood samples were collected in all seasonsThe 25-OH-D values are expressed in mean ± SD (or mean ± SE when with *) or median, and are converted if not in nmol/l. Different deficiency/insufficiency cutoffs and rates were provided by investigators

Poor vitamin D status was not seen in participants taking vitamin D–fortified products or supplementation (Table 2A) 8 and 13, unequivocally suggesting that vitamin D supplementation improved 25(OH)D status. Additionally, exposure to sunshine, thus allowing individuals to receive ultraviolet B (UVB), in the summer months improved 25(OH)D status in the same children who were previously deficient (Table 2B) 14. Consequently, clinical rickets declined from 41.6% to 17%.

Table 2. Vitamin D status can be improved in children

Footnote: please see Table 1The elevation in Dali is 2007 meters

∗The data from Hong Kong were used for head-to-head comparison with Beijing.

Surprisingly, in women of childbearing age, a lower 25(OH)D level also was found in lower latitude regions (29 nmol/L in Beijing versus 34 nmol/L in Hong Kong where the latitude is 22 north) 18.

Vitamin D status in the elderly

The data presented in this contribution are likely epitomic for the nation because the investigations were conducted in the east part of Hu’s line (Fig. 1), which has been with <40% of the land and >90% of the population since 1930s 37. In the global map of vitamin D deficiency/insufficiency 3 and 38, these data from China would stand for a sizable geographic area and the largest population. 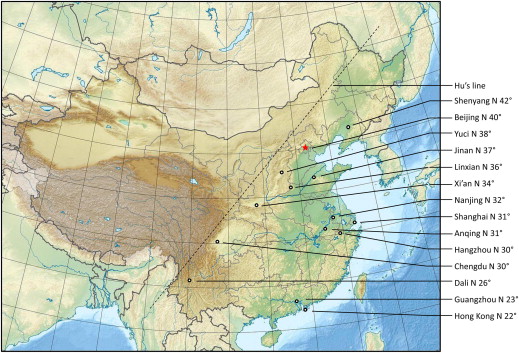 Fig. 1. Distribution of studies. In some places like Beijing and Shanghai, multiple studies were conducted. The original blank map is from http://en.wikipedia.org/wiki/File:China_edcp_relief_location_map.jpg#file. The map is licensed under Creative Commons ShareAlike 3.0 http://creativecommons.org/licenses/by-sa/3.0/deed.en.

Vitamin D deficiency/insufficiency in China might have been caused by multiple factors, some of which are unique and worthy of being recognized. First, with the rapid transformation from an agrarian to an industrialized society, the urban proportion of population increased from 33% in 2000 to 50% in 2013 (the fifth and sixth National Population Survey http://www.stats.gov.cn). Accordingly, the number of people engaged in an outdoor profession with sun exposure has dramatically decreased. Second, due to air pollution accompanied by industrialization and urbanization, people were discouraged from spending time outdoors and UVB was prevented from penetrating the atmosphere; Third, the preference for lighter skin color (fair skin) in the society remains unchanged, leading to popular use of hats, umbrellas, and sunscreens when outdoors. UVB radiation–related skin carcinomas also are increasingly a concern. Fourth, despite massive and successful improvements in macronutrient intakes in the Chinese population, micronutrient intake did improve in parallel 39. In fact, natural food rich in vitamin D in the Chinese diet remain scarce, and food and beverages fortified with vitamin D are limited in the market.

Over the past several decades, the life span and life expectancy of the Chinese people has increased significantly, which brought the consequences of vitamin D deficiency, like osteoporosis and bone fracture, into greater prominence 40. Accompanied by poor 25(OH)D status, a bone mineral density (BMD) survey with dual-energy X ray absorptiometry (DXA) in 10 Chinese cities estimated that the proportion of osteoporosis in men and women over age 50 y was 10.4% and 31.2%, respectively 41. Furthermore, the incidence of hip fracture in Beijing in the period 2002 to 2006 escaladed much more rapidly compared with 1990 to 1992 42. Vitamin D deficiency increases the risk for both osteoporosis and falls 43 and 44, which are the two major risks for bone fracture.

In summary, from published investigations in Mainland China since the year 2000, vitamin D deficiency/insufficiency was found to be widely prevalent, which constitutes a significant but modifiable public health risk that deserves greater awareness and more efficient and timely management. To attain a desirable vitamin D status at the population level, it requires multiple approaches (e.g., promotion of a healthy lifestyle, implementation of recommended daily intake, development of voluntary and mandatory fortification programs, and regulation establishment and reinforcement).

(References are in PDF at the bottom of this page)

Chinese have very low vitamin D - July 2013         Printer Friendly PDF this page! Follow this page for updates
This page is in the following categories (# of items in each category)
Deficiency of Vitamin D 414 Orient 63

2000 IU vitamin D not enough to get most Chinese to 20 ng level – RCT Feb 2015NONE of the pregnant Beijing women had adequate levels of vitamin D – April 2013Previous VitaminDWiki NewsVitamin D deficiency in China – only 1 in 18 have even 30 ng, fewer if young ...