Autism prevalence in the United States with respect to solar UV-B doses:
An ecological study

Evidence is mounting that vitamin D deficiency is intimately involved in autism. We report on autism prevalence by US state for those aged 6–17 y in 2010 with respect to indices of solar UV-B (UVB) doses. We calculated autism prevalence rates for white, black and Asian Americans by using total prevalence and relative populations of minors for each ethnic group by state. Analyses omit AK and HI (considered extreme cases), WY (no data), along with AZ and ND for black Americans (low numbers) and DC, ME, MT, ND and SD for Asian Americans (low numbers). For white Americans, the regression coefficient for solar UVB doses and autism prevalence ranged from -0.52 in January to -0.57 in October. For black Americans, the regression coefficient for latitude was 0.61, whereas those for solar UVB ranged from -0.55 to -0.61. For Asian Americans, the values for solar UVB ranged from -0.28 to -0.38. The inverse correlation between solar UVB and autism prevalence is similar to that for many types of cancer in the US. The journal literature indicates that adverse effects on fetal brain development during pregnancy due to vitamin D deficiency can explain these findings. However, we cannot rule out a role of vitamin D deficiency in early life. These results add to the evidence that vitamin D deficiency may be an important risk factor for autism and suggest that pregnant women and autistic individuals raise their serum 25-hydroxyvitamin D concentrations above 30 ng/ml.

Autism vs UVB for blacks in 45 US states 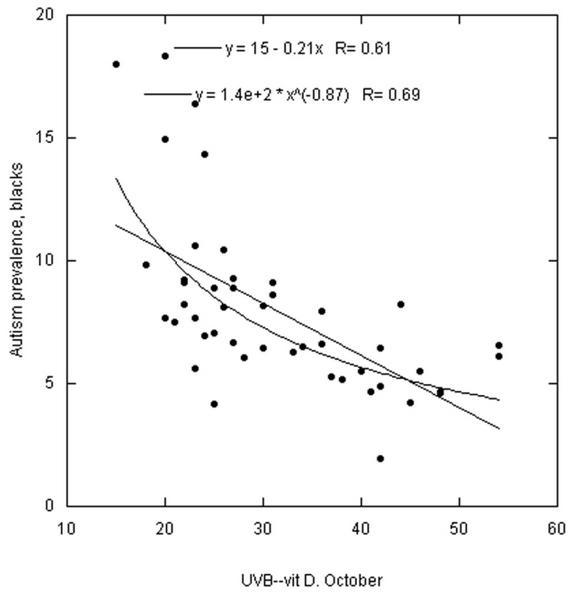 Printer Friendly PDF this page! Follow this page for updates
This page is in the following categories (# of items in each category)
Skin - Dark 413 Autism 132
Edit Comments Files 2