Vitamin D (D) has three major vitamers: ergocalciferol (D2), cholecalciferol (D3), and 25-hydroxycholecalciferol (25D). D2, the first to be used in large scale supplementation, is a synthetic product resulting from UV irradiation of plant sterols and is not found in typical human food sources except in sun-dried fungi. D is produced throughout the biological kingdom and functions mainly in gene transcription. D3 is the major vitamer in most animals. Its principal source is vertebrate skin, where it is converted from 7-dehydrocholesterol by UV-B radiation.

Although D2 and D3 were originally considered to have the same molar potency (~40 IU/µg), more recent work has shown that D3 is about twice as potent as D2 (measured as elevation of serum 25D). This is partly because D2 upregulates 24-hydroxylation, leading to increased metabolic degradation of the 25D metabolites of both D2 and D3. This difference has important implications for D2 dosing frequency and for testing response to D2 supplementation.

At daily inputs above 2000 IU/d (50 µg), 25-hydroxylation is a limiting step. In individuals with slower 25-hydroxylation, unconverted D is stored as such in fat. However, at lower daily inputs, 25-hydroxylation is virtually complete and little D is stored. In one study involving ~1430 IU/d, only ~17% of the total administered was stored in fat, and ~83% consumed metabolically. This makes potency comparisons between D3 and 25D3 difficult as 100% of the administered 25D is reflected immediately in serum 25D; whereas with D3, conversion is slower and peak response is typically delayed by seven days or more. Current estimates, based in part on long-term treatment studies, suggest that 25D may be from 4–7× as potent as D3 in raising serum 25D. If correct, that means that from 75–90% of D3 does not follow the canonical vitamin D pathway (i.e., is either degraded or enters cells without prior 25-hydroxylation). Only extended PK studies, not yet done, will permit precise comparison of D3 and 25D.

1,25-dihydroxy cholecalciferol, while the principal active form of the vitamin, should be classified as a derivative of D, not as a D vitamer, since, when administered either orally or parenterally, it does not mimic the full range of activities of D or 25D. That is because its principal function is as an autocrine cofactor, produced in a tightly regulated, tissue-specific fashion. Its tissue level production, however, is dependent upon substrate (25D) concentration in serum. For all the above reasons, 25D serum concentration is currently accepted as the principal measure of vitamin D status. 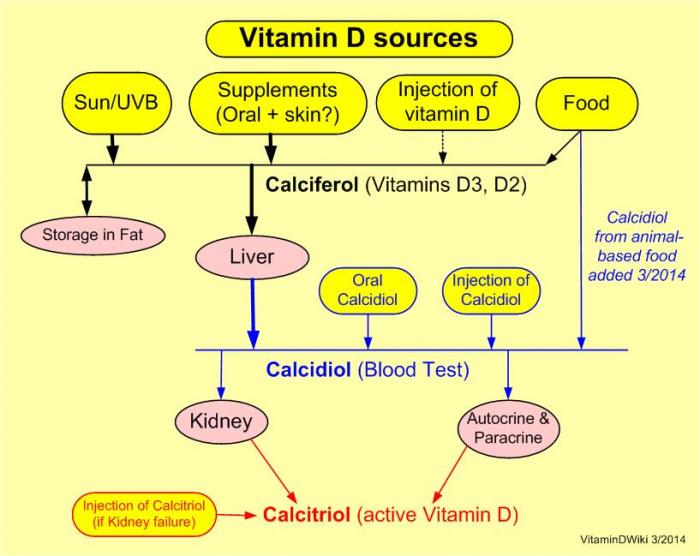