Relationship of Vitamin D Deficiency to Echocardiography Findings in Veterans

Objectives: Vitamin D deficiency has reached epidemic levels and has been frequently found in United States veterans. This deficiency has been linked to cardiovascular disease; however few studies have examined the relationship of vitamin D status to cardiac sonography. The purpose of the current study was to examine the relationship between vitamin D and echocardiography findings.

Measurements: Charts were reviewed for key variables of interest, and patients with coronary artery disease and without vitamin D testing were excluded.

Vitamin D may have multiple cardiac effects including direct effects on cardiac function. Vitamin D analogs have potent anti-hypertrophic cardiac activity in spontaneously hypertensive rats [8]. Echocardiographic evidence of left ventricular dysfunction in children with rickets has also been noted [9]. Vitamin D deficiency may be associated with myocardial dysfunction and death due to heart failure [10], and may also influence the cardiovascular system through effects on the renin aldosterone axis [11].
Few studies have examined the relationship between cardiac valvular function and vitamin D status. Moreover, the presence of coronary artery disease can significantly impact not only ejection fraction but also cardiac valvular function. We initiated the present study to determine if vitamin D was associated with poorer cardiac valvular function and pulmonary artery pressures in patients without documented coronary artery disease.

Methods
Participants and procedures
The study was conducted at a Veterans Administration Medical Center in the Southeastern United States. The Research and Development committee at the VA Medical Center and the Institutional Review Board at the affiliated university approved procedures and protocol. In addition, none of the authors had any conflicts of interest.

Patients without a diagnosis of coronary artery disease that had a documented 25(OH)D value and an echocardiogram were included. To ensure that vitamin D status would apply at the time of echocardiogram, only individuals with vitamin D testing and echocardiogram within a two week window were included. Data were obtained electronically through retrospective medical chart review. Echocardiogram data included parameters relating to left ventricular ejection fraction, left ventricular hypertrophy, diastolic dysfunction, mitral regurgitation, aortic sclerosis, aortic stenosis and pulmonary hypertension. Each parameter was sub-classified as absent, mild, moderate and severe.

The presence and the grade of diastolic dysfunction were evaluated by using the Mitral Flow Velocities and the Mitral annulus velocities (determined by tissue Doppler). The severity of valvular abnormalities was determined according to the ASE guidelines (American Society of Echocardiography). Doppler, Color Flow imaging and Volumetric Method were used to quantify the severity of Mitral Regurgitation, regurgitant volume < 30 cc, regurgitant jet area less than 20% of the LA area, and regurgitant fraction less than 30% were considered as mild. Regurgitant volume > 60 cc, regurgitant jet area > 40% of the LA area and regurgitant fraction > 50% were considered severe. Vena contracta and effective regurgitant orifice were used at the discretion of the operator as is customary [12].

Serum 25(OH)D was determined via immunochemiluminometric assay (Labcorp, Burlington, North Carolina). Vitamin D was examined as both a continuous and dichotomous variable with deficiency classified as 25(OH)D < 20 ng/ml [1].

Data analysis
Statistical analyses were performed using SPSS (SPSS Inc., version 14.0; Chicago, Illinois). All variables were checked for outliers and normality of distribution before analyses were performed. Correlations, logistic regressions, t-tests, and x2 analyses were used to answer the questions of interest. One tailed tests was used, due to a directional hypothesis and a small sample size, and a p < 0.05 was considered statistically significant.

Results
The final sample contained 32 patients. The vast majority were White (78%) and male (88%).
The average age was 66 years, with a range from 43 to 88 years. Of the 32, 25% were diabetic, 69% had dyslipidemia, and 88% were hypertensive.
The average BMI was 27.6, with a range from 16.9 to 41.7.
The average vitamin D level for the sample was 26.5 with a range of 5.5 to 69.1.
Using a cut-off value of 20, 43.8% of the patients would be considered Vitamin D deficient.
With respect to the echocardiogram, the average Left Ventricle Ejection Fracture (LVEF) was 53.9 (range 25-70).
No diastolic dysfunction was evident for 69.3% of the patients (38.7% were Grade I).
Mitral regurgitation was absent for 40.6% of patients (53.6% were mild, 3.1% were moderate),
40.6% were positive for aortic sclerosis.
Aortic stenosis was absent for 93.8% (6.3% mild).
Left ventricle hypertrophy was absent for 68.8% of patients (25.0% mild, 6.3% moderate).
Finally, 71.0% did not have pulmonary hypertension (22.6% were mild, 6.5% were moderate, none were classified as severe).
The first question of interest addressed the association between vitamin D and LVEF. Treating both variables as continuous and calculating a correlation coefficient revealed a moderate correlation between the two variables, however due to the small sample size the association was not statistically significant (r=.203, p=.133). When vitamin D deficiency status was examined, the two groups (deficient and non-deficient) did not differ significantly in mean LVEF value (Deficient=52.50, Non-deficient=55.00, t=.76, p=.227). 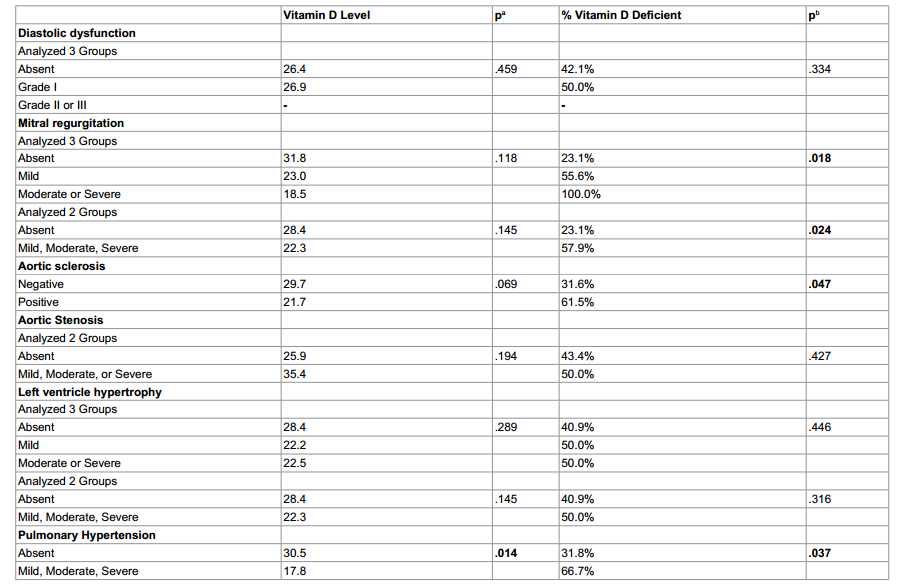 Entire PDF is attached at the bottom of this page

Echocardiograms confirm problems with low vitamin D – May 2012         Printer Friendly PDF this page! Follow this page for updates
This page is in the following categories (# of items in each category)