73 percent of Australians had too little vitamin D – Dec 2011

+CLICK HERE for: 2X more people have less than 30 ng of vitamin D in a decade – Feb 2010 +Even worse for the obese, elderly, women, those further from equator, and those with dark skins.

Prevalence of vitamin D deficiency and its determinants in Australian adults aged 25 years and older: A national, population-based study.

Design and Patients:? We studied a national sample of 11,247 Australian adults enrolled in the 1999/2000 Australian Diabetes, Obesity and Lifestyle (AusDiab) study drawn from 42 randomly selected districts throughout Australia. Measurements:?
Serum concentrations of 25-hydroxyvitamin D 25(OH)D were measured by immunoassay. Vitamin D deficiency was defined as a concentration <50 nmol/L.
Information on demographic and lifestyle factors were derived from interview-administered questionnaires.


Conclusion:? Vitamin D deficiency is common in Australia affecting nearly one-third of adults aged ?25 years.
This indicates that strategies are needed at the population level to the improve vitamin D status of Australians. © 2011 Blackwell Publishing Ltd.

Note: ALL 25 of the recommendations are greater than the 20 ng recommended by govts of Australia and the US

The campaign did reduce skin cancer, but has increased by at least 100X the medical problems due to lowered vitamin D, including, ironically, melanoma 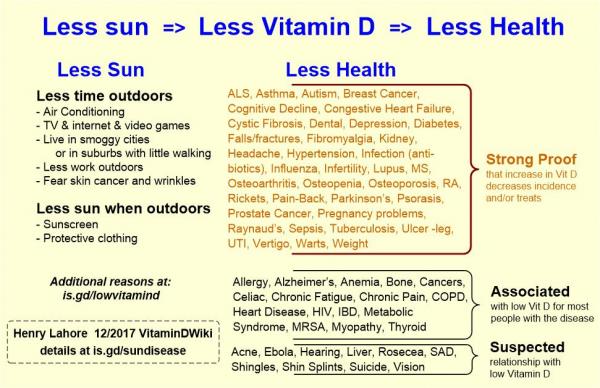 Now US = 3X Australia, but both are far less than what is needed for health

Notes
Adequate Intake (AI): established when evidence is insufficient to develop an RDA and is set at a level assumed to ensure nutritional adequacy
It appears no country has a recommendation less than Australia at 200 IU
Australia had been tied with Germany for 200 IU, but Germany increased recommendation to 800 IU in Jan 2012

CLICK HERE for VitaminDWiki blog of IU recommendations from around the world - Jan 2012, such as

Vitamin D for most regions of the world include Australia 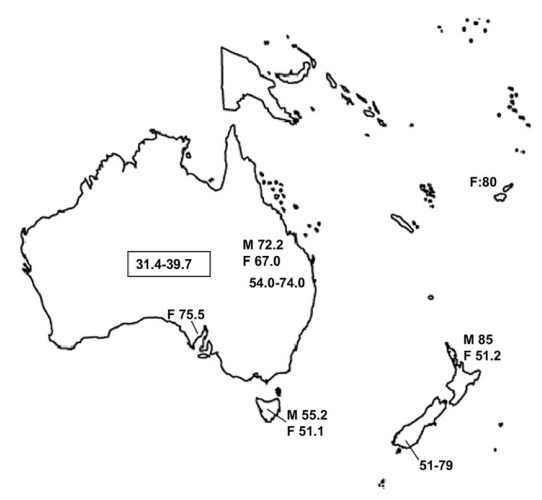