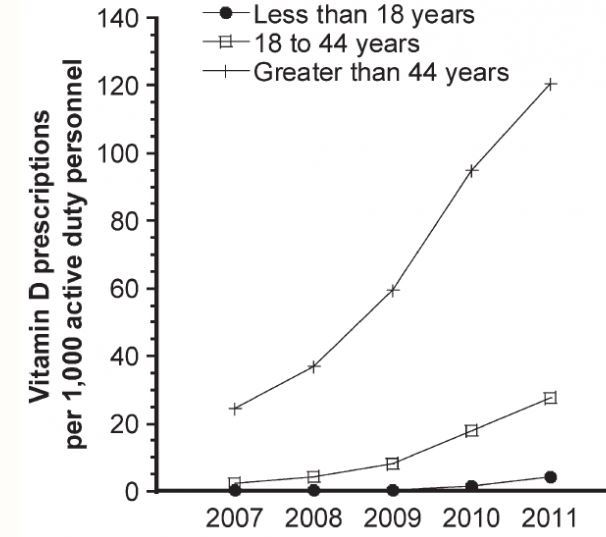 Thus huge potential economic benefits to military for increasing Vitamin D include:
DECREASED brain trauma, stress fractures, suicide. breast cancer, MS, time in ICU, etc.
DECREASED COST Of health care for both active military and veterans
INCREASED FORCE READINESS
By the way: Vitamin C was the focus of perhaps the first Randomized Controlled Trial (RCT) in 1758
It took the English govt over 100 years to give Vitamin C to their sailors
to increase "force readiness" to fight the French


INTRODUCTION:
Although prior studies have examined the prevalence of dietary supplement use among various populations, data on single vitamins prescribed by health care providers are limited.

OBJECTIVE:
This study examined trends in single-vitamin supplement (A, C, D, E, K) prescriptions by providers from military treatment facilities from 2007 to 2011.

CONCLUSION:
Together, prescriptions examined in this study increased steadily from 2007 to 2011, primarily because of the increase in vitamin D prescriptions. The exhibited trend reflects the current general-population pattern of dietary supplement use, with large increases in vitamin D and declines in vitamin E.

Reprint & Copyright © 2015 Association of Military Surgeons of the U.S.