Testosterone-Induced Effects on Lipids and Inflammation

Chronic pain has to be considered in all respects a debilitating disease and 10-20% of the world's adult population is affected by this disease. In the most general terms, pain is symptomatic of some form of dysfunction and (often) the resulting inflammatory processes in the body. In the study of pain, great attention has been paid to the possible involvement of gonadal hormones, especially in recent years. In particular, testosterone, the main androgen, is thought to play a beneficial, protective role in the body. Other important elements to be related to pain, inflammation, and hormones are lipids, heterogenic molecules whose altered metabolism is often accompanied by the release of interleukins, and lipid-derived proinflammatory mediators. Here we report data on interactions often not considered in chronic pain mechanisms.

Vitamin D, in particular its metabolite 25-hydroxyvitamin D (25[OH]D), is widely recognized for its involvement in calcium homeostasis and immunomodulatory effects. Its hormonal action decreases the risk of many chronic illnesses, including osteoporosis, osteoarthritis, metabolic syndrome, fibromyalgia, and chronic fatigue syndrome [6870]. Vitamin D can be synthesized in the skin from sun exposure and is found in salmon, mushrooms, eggs, and dairy products.Biological actions of vitamin D are mediated through the vitamin D receptor (VDR). The VDR is almost ubiquitously expressed in human cells, which underlines the clinical significance of the vitamin D endocrine system [68]. Altered vitamin D homeostasis is associated with increased risk of developing obesity [71,72], hypertension [73], glucose intolerance, and metabolic syndrome [74]. Indeed, plasma vitamin D levels were associated inversely with body mass index (BMI) and fat levels and positively with HDL cholesterol [75]. Furthermore, visceral adipose tissue was higher in vitamin D deficient subjects. Sequestration of vitamin D in body fat stores and its consequent reduced bioavailability offer a plausible explanation for this association [76, 77]. Recent research revealed that calcitriol also exhibits multiple anti-inflammatory effects. First, calcitriol inhibits the synthesis and biological actions of pro-inflammatory prostaglandins (PGs) by three mechanisms: suppression of the expression of cyclooxygenase-2, the enzyme that synthesizes PGs; upregu-lation of the expression of 15-hydroxyprostaglandin dehydrogenase, the enzyme that inactivates PGs; and downregulation of the expression of PG receptors that are essential for PG signaling [78]. Moreover, vitamin D is able to suppress the release of TNF-a and to enhance synthesis of the anti-inflammatory cytokine IL-10 [79, 80]. Finally, vitamin D enhances the effect of anti-estrogen-like substances. In addition to these general/indirect effects, it has been shown that vitamin D increases T levels. This is primarily due to vitamin D being able to decrease the enzyme aromatase, which converts T into E2.

In fact, vitamin D reduces the production of E2 itself and blocks the production of the alpha-E2 receptor [81]. Thus, vitamin D increases T levels, as further confirmed by a study in which men with sufficient 25(OH)D levels had significantly higher levels of T and significantly lower levels of SHBG than 25(OH)D-insufficient men [82]. Moreover, Pilz and colleagues reported that vitamin D supplementation increases T levels [83]. Symptoms of T deficiency, which may be indirectly contributed to by a lack of vitamin D, include fatigue, depression, and muscle wasting. This reduced muscle mass could promote pain in muscles, causing older men to attribute muscle aches and pains to the aging process. 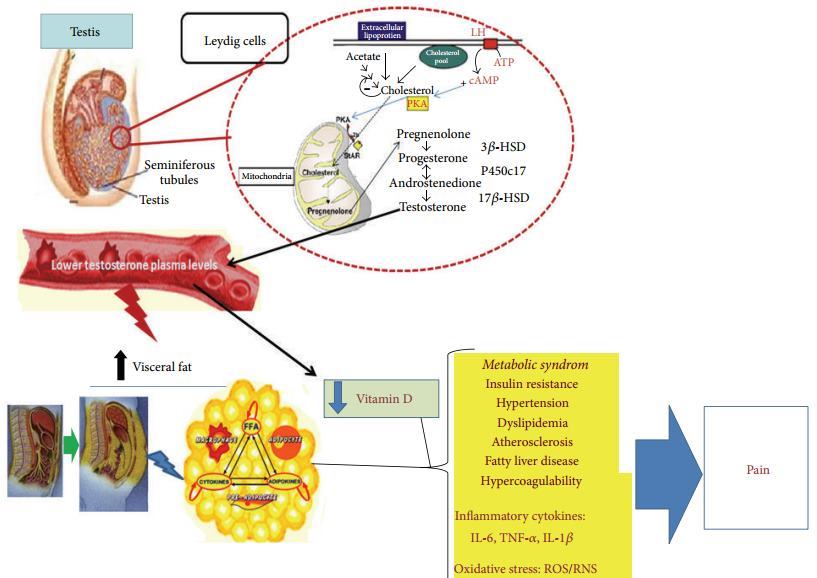 Testosterone, vitamin D and inflammation – March 2013         Printer Friendly PDF this page! Follow this page for updates
This page is in the following categories (# of items in each category)
Fertility and sperm 110