There are two articles on this page

An Update: Vitamin D Deficiency and Risk for Rheumatic Diseases

The final active metabolite of vitamin D (1,25(OH)D3) is considered a steroid hormone for its origin from cholesterol (D-hormone), and like glucocorticoids exerts immunomodulatory activities (figure 1).23

Cross-sectional studies have shown that deficient serum levels of vitamin D (25(OH)D) (<20 ng/ml) are present in a significant percentage, not only in patients with autoimmune diseases such as multiple sclerosis (MS), type 1 diabetes, systemic lupus erythematosus (SLE) or rheumatoid arthritis (RA), but also in healthy subjects.45 In addition, the presence of severe 25(OH)D deficiency (<10 ng/ml) is also involved in the generation of symptoms that characterise patients with rheumatic diseases (ie, musculoskeletal pain in RA), and supplementation seems to induce improvements.67

The IIM patients with shorter disease duration showed lower levels of serum 25 (OH)D than those with established treated disease, supporting the hypothesis that low levels of vitamin D could be at least one of several risk factors in development of IIM, as already assessed in MS, RA and SLE.

The suggested role for low serum 25 (OH)D as a risk factor in autoimmunity seems strongly reinforced by some recent investigations showing that even antinuc-lear antibodies (ANA)-positive healthy controls are significantly more likely to be deficient in vitamin D serum levels than ANA-negative healthy controls.9 Conversely, in a recent survey, vitamin D supplementation (140 000 IU at baseline and after 4 weeks) was found to be associated with significant increases of Tregs frequency (%Tregs) in apparently healthy individuals.10

Interestingly, in an interventional study evaluating the immunological effects of vitamin D supplementation in 20 SLE patients with hypovitaminosis D, a decrease of memory B cells and anti-DNA antibodies together with a preferential increase of naive CD4 Tcells, an increase of regulatory Tcells and a decrease of effector Th1 and Th17 cells were observed.12

Furthermore, a very recent study showed that reduced serum 25(OH)D levels are associated with the presence of autoimmune response in tuberculosis patients, by reporting a significant negative correlation between the titres of the ANA and the serum levels of 25(OH)D.13

A new and intriguing study links low serum 25(OH)D and elevated immunor-eactivity against Epstein-Barr virus (EBV) in 25 individuals who had donated blood prior to the first clinical MS manifestation (clinically isolated syndrome).14 In fact, a novel role for low vitamin D as risk factor and/or modifier of autoimmune response is introduced. It is proposed that deprivation of solar light or low serum 25(OH) D at higher latitudes, facilitates the development of autoimmune diseases by aggravating the CD8 T-cell deficiency, thereby further impairing control of EBVand permitting clonal expansion of autoreactive B cells infected with EBV.15

A LESSON FROM VITAMIN D AND CHRONIC INFECTIONS/ INFLAMMATION: THE CASE OF TUBERCULOSIS

Vitamin D is synthesised at an increased rate inside monocytes/macrophages in the presence of bacterial and viral infections, and in normal conditions stimulates the synthesis of antimicrobial peptides such as cathelicidins, which contribute to bacterial killing and defence against pathogens (such as Mycobacterium tuberculosis)3

These mechanisms support the beneficial therapeutic effects exerted by graded solar light exposure, which was used to treat chronic tuberculosis in the so called 'sanatoria' at the beginning of the twentieth century

In addition, a systematic review of the period between 1971 and 2006 in 11 countries and regions from around the world confirmed a seasonal pattern for tuberculosis, with the most prominent peak during the winter and spring seasons (the time of the circannual reduction in vitamin D synthesis) in all of the countries studied 16 17

Recently, 95 patients receiving antimicrobial therapy for pulmonary tuberculosis who were randomised to receive adjunctive high-dose vitamin D or placebo in a clinical trial, and who fulfilled criteria for per-protocol analysis, also showed an accelerated resolution of inflammatory responses during tuberculosis treatment 18

The administration of vitamin D enhanced the treatment-induced suppression of antigen-stimulated Th1 cytokine responses and is a further lesson on the previously unrecognised anti-inflammatory activities exerted by 1,25(OH)D3 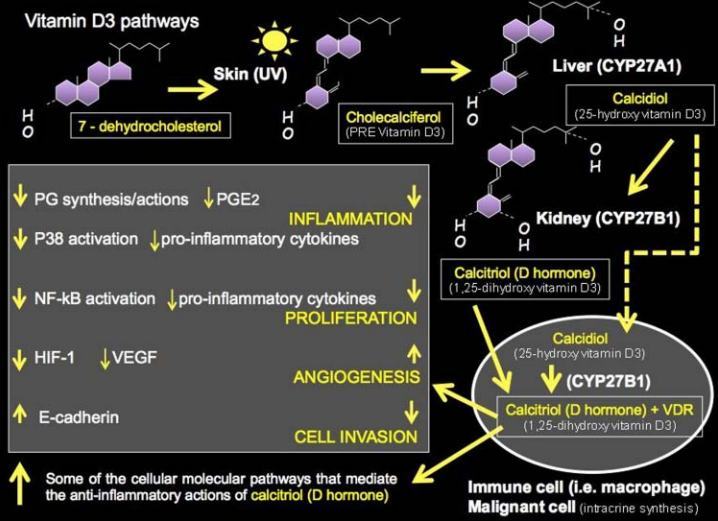 Newly identified target genes for calcitriol (D hormone) reveal multiple molecular pathways of anti-inflammatory actions for 1,25(OH)D3 in several cell types. These include: inhibition of prostaglandin (PG) synthesis and biological actions; inhibition of p38 stress kinase activation and production of proinflammatory cytokines such as IL-6 (via induction of MAP kinase phosphatase 5 (MKP5 expression); inhibition of nuclear factor kB(NF-kB) signalling which results in the attenuation of the synthesis of proinflammatory cytokines such as interleukin-8 (IL-8) (via up-regulation of the expression of insulin-like growth factor binding protein-3 (IGFBP-3); inhibition of angiogenesis due to suppressive effects on the expression of proangiogenic factors such as hypoxia-inducible factor 1 (HIF-1) and vascular endothelial growth factor; increase in the expression of E-cadherin, leading to the inhibition of invasion and metastasis. Solid lines indicate direct actions of calcitriol, and dotted lines indicate downstream effects of calcitriol.

Linked to the different seasonal vitamin D availability, recent studies have shown that people living at the highest latitudes have a higher risk of RA, especially in winter, which may be due to lower ultraviolet (UV) light exposure 19 20 In fact, the UV light may suppress autoimmunity and thus may decrease the risk of RA

The very recent study by Arkema et al, investigating the association between UV-B light exposure and risk of RA among women in two large prospective cohort studies (the Nurses' Health Study (NHS) and the NHSII) confirmed a significant decreased RA risk with higher UV-B exposure, in particular in the absence of sun-protective behaviours 21

Interestingly, 1314 incident RA cases were identified in total and among NHS participants, higher cumulative average UV-B exposure was associated with decreased RA risk; those in the highest versus lowest category had a 21% decreased RA risk (HR 0.79, 95% CI 0.66 to 0.94).

These results confirm the conclusions of another recent large cohort study, which showed that besides the usual initial bio-markers that have been associated with the progression of early RA, the season of symptom onset (ie, winter or spring) acts as an independent predictive factor for the progression of joint structural damage at 6 months.22 Furthermore, the onset of symptoms of early RA during winter or spring was also associated with greater radiographic evidence of disease progression at 12 months.22

Adding weight to these findings, multi-variate analysis produced the same results in two adjoining seasons (winter and spring, summer and autumn), and at both 6 and 12 months, suggesting a clear role for solar light/vitamin D implication.22 23

On the other hand, if infections represent one of the risk factors (trigger factors) for the development of early RA (and generally autoimmune diseases), the seasonality of the onset and severity of RA might also be linked to the seasonality of infections and associated vitamin Ddeficiency, as previously discussed.24

As mentioned above, vitamin D supplementation in SLE patients with hypovitaminosis D induced a decrease of memory B cells and anti-DNA antibodies, together with a preferential increase of naive CD4 T cells, an increase of regulatory T cells and a decrease of effector Th1 and Th17 cells.11\

Interestingly, a recent clinical study assessed that a significant solar-induced A25(OH)D was present at the earliest on 8 April, maximal by early August and decreased by late August, following the availability of efficient UV light doses.26

All this clinical and epidemiological evidence seems in agreement with several experimental studies, showing that UV radiation acts as an immunosuppressant by up-regulating Th2 cells, down-regulating Th1 cells, and inducing the production of interleukin-10 and Tregulatory cells.27 28 UV-B exposure (solar light) could thus decrease the risk of RA onset as well as relapses, through increasing serum vitamin D, which exerts known immunomodulatory effects.29

A prominent endocrine role for 1,25(OH)D3 was recently discovered in peripheral oestrogen metabolism and in oestrogen-related cell proliferative activities. 1,25(OH)D3 decreases the expression of aromatase, the enzyme that generally catalyses the peripheral synthesis of oestrogens from androgens, especially in cancer tissues where its intra-crine activity is significantly increased, such as in breast and prostate cancer.30

Similar inhibitory effects by 1,25(OH)D3 have been recently reported on cultures of human macrophages with consequent reduced synthesis of cytokines.31 32 Inflammatory cytokines (tumour necrosis factor-a, interleukins 6 and 1) are strong enhancers of aromatase activity, as observed in chronic inflammatory conditions such as RA synovitis or SLE skin.33 34
As a consequence, oestrogen metabolite synthesis is increased in synovial fluids of both male and female RA patients and seem involved in synovial cell proliferation.35

The higher incidence of autoimmune rheumatic diseases in women also seems supported by possible links between vitamin D deficiency (with reduced down-regulation of aromatases), increased synthesis of peripheral oestrogens and increased risk/severity for RA, as already proposed in different types of cancer.37 38

Evidence supports an increased risk for autoimmune diseases, as well as for infections and cancer, in vitamin D deficiency.
In the presence of overt disease, the severity of the process seems related to vitamin D deficiency.
The link between the seasonality of 1,25(OH)D3 deficiency and the circannual incidence and severity of at least some autoimmune rheumatic disorders, might be reduced by its therapeutic supplementation.

Vitamin D increasingly associated with inflammation such as RA, TB, Lupus, and cancer – March 2013         Printer Friendly PDF this page! Follow this page for updates
This page is in the following categories (# of items in each category)
Tuberculosis 117 Lupus 66 Rheumatoid Arthritis 107 Cancer 248 Inflammation 152