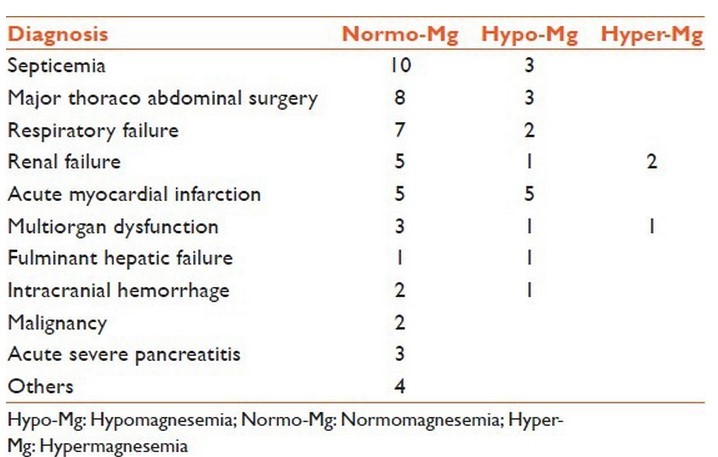 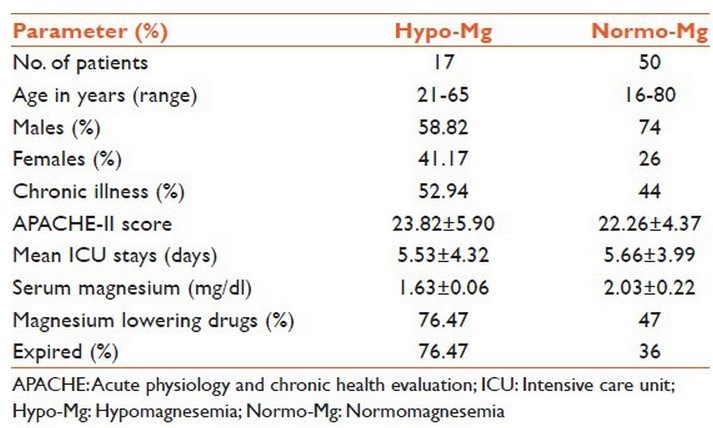 Background:
Magnesium is one of the major electrolytes, deficiency of which is frequently overlooked in critical illness, leading to an adverse clinical outcome if not monitored regularly.

Materials and Methods:
The subjects studied were monitored for serum magnesium levels 2 times: Day 1 and day 4 of intensive care unit (ICU) admission. Patients were divided into normomagnesemic and hypomagnesemic groups and compared for various parameters.

Magnesium is fourth most common cation in the body and second most common intracellular cation after potassium, yet its deficiency in critically ill-patients is frequently overlooked.[1,2,3] Various studies have reported the incidence of hypomagnesemia up to 65% in critically ill-patients.[4] Although many paradigms have been explored to minimize the mortality in critical care units, magnesium loss has been scarcely addressed; in this respect leading to inconclusive results. Serum magnesium monitoring may have prognostic and perhaps therapeutic implications because critically ill-patients are predisposed to both symptomatic or asymptomatic magnesium deficiency that can lead to some important clinical consequences (such as hypokalemia, cardiac arrhythmias, hypocalcemia, neurotoxicity and psychiatric problems), ultimately increasing the morbidity and mortality.[5] There is a paucity of data in Indian literature, addressing this common, but underdiagnosed electrolyte deficiency. Present study was undertaken against this backdrop at a tertiary care teaching hospital to assess the magnitude of magnesium deficiency and its influence on the outcome of critically ill-patients so that baseline reference data for insight and management of the problem in routine cases in our intensive care units (ICUs) is formed.

This study was undertaken in a tertiary care teaching hospital of north India, over a period of 2 years. This hospital has independently functioning ICUs, both medical as well as surgical. The study was started after getting clearance from the Ethical Committee, which is an independently functioning body of this institute. A detailed protocol was presented and discussed with the committee before the start of the study. It was a prospective observational study, which involved patients from both the medical and surgical ICUs. Patients were enrolled at random and the selection bias was avoided by registering those patients who fulfilled the criteria for critical illness and who were newly admitted to ICU. Thus, the condition of subjects was first demarcated as critical who fulfilled the criterion of minimal physiologic reserve, requiring life support until abnormalities have been reversed, undergone massive disruption of physiology, requiring intensive monitoring in anticipation of possible aggressive intervention or post-operative cares. Those patients were included who had ≥1 organ failure (acute respiratory failure, acute liver failure, acute renal failure, septicemia, acute myocardial infarction, cerebrovascular accidents or multiorgan failure). Post-operative (especially major thoracoabdoninal surgery) and polytrauma patients were also included. Only those patients were included in which it was possible to take day 1 sample for serum magnesium. Critically ill-patients in which day 1 of ICU stay was missed were excluded. Patients who were stable and did not fulfill the criteria for ICU admission or who were in the general wards of the hospital were excluded. Furthermore, the patients who had documented hypomagnesemia before the ICU admission or who were on magnesium supplementation were excluded. Patients were enrolled for the study after informed consent was given by first-degree relatives of critically ill-patients in the presence of two witnesses. Demographic data (age and sex), medical history, surgical history, medications administrated and length of ICU stay were recorded for each patient. The severity scoring system used was Acute Physiology and Chronic Health Evaluation-II (APACHE-II) which includes acute physiology score, Glasgow coma scale, points assigned to age with chronic disease and chronic health condition score. Other investigations such as arterial blood gases, complete blood count, kidney function tests, liver function tests, serum electrolytes, electrocardiography, chest X-ray and ultrasonography were also done. Blood, urine and endotracheal secretions were sent for culture screen in every febrile patient. Computed tomography and magnetic resonance imaging scanning was performed wherever it was required.

About 1 ml of venous blood was taken after informed consent from the patient's first degree relative on day 1 and day 4 of ICU admission and immediately used for sera separation. The blood was collected in green top vacutainers and made to stand for 30 min until centrifugation on 3000 rpm in a centrifuge (Sigma USA). The clear upper layer was isolated and freezed at – 20°C until assayed. The concentration of serum magnesium in the samples was determined by magnesium fluid monoreagent (Centronic GmbH-Germany), a colorimetric endpoint method. The sensitivity of this method has shown a correlation with atomic absorption spectroscopy. Two ml of monoreagent was added to 20 μl of sample. The contents were vortex shaked and incubated at 25°C for 5 min. The colored complex formed by magnesium with the monoreagent was read on a spectrophotometer (Shimadzu, Japan) in 1 ml cuvettes at 545 nm against reagent blank. The results were expressed as mg/dl. Normal range for magnesium concentration in our laboratory was 1.70-2.55 mg/dl. Subjects were divided into normomagnesemic and hypomagnesemic groups and compared for various parameters. Serum magnesium level of <1.70 mg/dl was regarded as hypomagnesemia and ≥2.56 mg/dl as hypermagnesemia.

All the data were expressed in Mean ± standard deviation (SD). Analysis was performed by using test statistic Student's t-test for the difference of means, Chi-square test, Fisher's exact test and correlation. These tests were further referenced for P values for their significance and P < 0.05 was considered to be significant.

Magnesium is mostly located in bone or within the cells. Assessment of magnesium status in either of these compartments in critical illness is impractical. The physician must therefore rely on determination of serum magnesium to determine if a patient is magnesium deficient.[6] Occurrence of magnesium deficiency in critical illness correlates with higher morbidity and mortality. The primary end points of this study were serum magnesium level and outcome of critically ill-patients. Secondary outcome measures were the associated electrolyte disturbances and length of ICU stay. In our study of 70 critically ill-patients, 17 (24.29%) patients were hypomagnesemic, 50 (71.23%) were normomagnesemic and 3 (4.28%) were hypermagnesemic, signifying remarkable occurrence of hypomagnesemia in ICU patients. Magnesium deficiency has been found to co-exist in up to 40% of patients with other electrolyte abnormalities. Magnesium has a marked effect on the regulation of transmembrane sodium and potassium movement. There are multiple reasons for magnesium deficiency in critical care settings e.g., decreased absorption caused by impaired gastrointestinal activity, malnutrition, renal wasting of various drugs (e.g., digoxin, gentamicin, loop diuretics etc.), diabetes mellitus, hypokalemia and hypocalcemia.[7] Genetic differences in magnesium utilization may account for differences in vulnerability to magnesium deficiency and differences in body responses to stress.[8,9] In our study, we found 76.47% patients of hypomagnesemia were on magnesium lowering drugs while as 46% of normomagnesemic patients were on magnesium lowering drugs. The difference was statistically significant (P = 0.030). Diuretics acting at loop of Henle such as furosemide have been shown by micropuncture studies to result in marked magnesium deficiency. Aminoglycosides have been shown to cause reversible renal lesion that results in hypermagnesuria and hypomagnesemia.[10] In a retrospective analysis of 179 children of a pediatric ICU, it was found that hypomagnesemia was more often seen in patients receiving diuretics and aminoglycosides.[11] Proton pump inhibitor associated hypomagnesemia is a rare, but potentially life-threatening side-effect that has emerged only in the era of mass use of these agents.[12]

Hypomagnesemia is a frequent electrolyte deficiency in critically ill-patients. Vital predictors of this deficiency are hypokalemia or hypocalcemia and considerable predisposing factor is the use of magnesium lowering drugs. There is an unfavorable outcome of critically ill hypomagnesemic patients irrespective of insignificant ICU stay and APACHE-II score. This study highlights the role of magnesium monitoring in critical illness and its value for favorable outcome. It adds to the scarce Indian data regarding magnesium homeostasis in ICUs. Our study has a limitation of smaller size of study population to comment on similar ICU stay, APACHE-II score and co-morbidity; for that a prospective study with larger sample size is needed.

Acknowledgements
The authors would like to thank patients for their participation in the study. Authors are grateful to the technical staff of clinical biochemistry and resident staff of the critical care unit.

ICU patients with low Magnesium were 2X more likely to die – June 2014         Printer Friendly PDF this page! Follow this page for updates
This page is in the following categories (# of items in each category)
Vitamin D and Magnesium 318 Trauma and surgery 307