Vitamin D has received tremendous amount of attention recently due to the ever-increasing reports of association between vitamin D deficiency and a wide range of conditions, from cancer to fertility to longevity. The fascination of disease association with vitamin D deficiency comes from the relatively easy solution to overcome such a risk factor, that is, either by increase in sun exposure and/or diet supplementation. Many reviews have been written on a protective role of vitamin D in asthma and related morbidities; here, we will summarize the epidemiological evidence supporting a role of vitamin D against hallmark features of severe asthma, such as airway remodeling and asthma exacerbations.

Furthermore, we discuss data from in vitro and in vivo studies which provide insights on the potential mechanisms of how vitamin D may protect against severe asthma pathogenesis and how vitamin D deficiency may lead to the development of severe asthma.

Approximately 5–15% of asthmatic individuals suffer from the more severe forms of disease in spite of aggressive therapies and they are more likely to have irreversible airflow obstruction associated with airway remodeling.

At present drugs commonly used to control asthma symptoms, such as corticosteroids, do not significantly reverse or reduce remodeling in the airways.

Hence, if vitamin D plays a protective role against the development of severe asthma, then the most effective therapy may simply be a healthy dose of sunshine.

Genomic and non-genomic mechanisms of 1,25(OH)2D3. 1,25(OH)2D3 exerts its effects via genomic and non-genomic mechanisms. Gene repression or transcription is classically initiated by 1,25(OH)2D3 entering into the cytoplasm and binds to VDR, followed by the formation of a complex with RXR, which subsequently translocates into the nucleus. The VDR–RXR complex binds to the VDRE of a target gene; whether the binding would lead to gene repression or transcription is dependent on the co-factors recruited (Deeb et al., 2007). Alternatively, 1,25(OH)2D3 may bind to VDR located on the plasma membrane and activates various signaling pathways. Biological effects via the non-genomic mechanism are considered rapid such as duodenum Ca2+ absorption, Cl− channel opening, pancreas insulin secretion, and vascular smooth muscle migration (Haussler et al., 2011). Cross-talk between the two mechanisms may occur such that an activation of a signaling pathway promotes the transcriptional activity of VDR (Deeb et al., 2007). 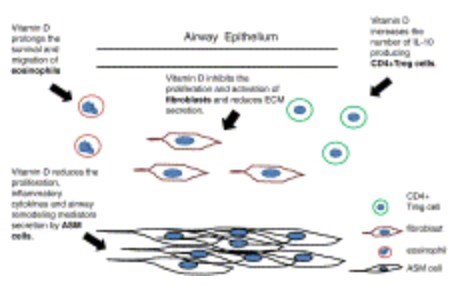 (Sorry aobut the low-quality image, it was the best I could get for free)
Vitamin D exerts its effects on inflammatory and structural cells which may prevent or reduce the extent of airway remodeling in asthma. ASM cells and airway fibroblasts contribute to airway remodeling by secreting ECM proteins and pro-inflammatory mediators. The anti-proliferative effect of vitamin D on these cells may be beneficial in reducing the extent of airway remodeling in asthma. Steroid resistance in severe asthmatic individuals poses a great challenge in asthma control, and vitamin D induces production of IL-10-producing Treg cells which may provide a means to induce steroid sensitivity in these individuals. Speculatively, vitamin D prolongs the survival of eosinophils and induces chemotaxis and migration away from the sites of inflammation.

Outline of the paper

Vitamin D might be able to deal with severe asthma – Sept 2013         Printer Friendly PDF this page! Follow this page for updates
This page is in the following categories (# of items in each category)
Breathing 404