Smoking is a significant determinant of low serum vitamin D in young and middle-aged healthy males. 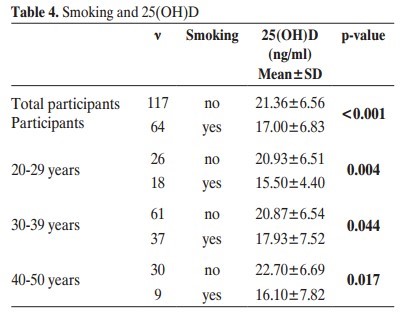 OBJECTIVE:
We aimed to determine the prevalence of 25(OH)D (D2 and D3 independently) inadequacy in healthy young/middle-aged men and to investigate its relationship with BMD, bone markers, demographic and lifestyle parameters such as age, BMI, smoking, alcohol consumption and dietary calcium intake.
DESIGN:
We determined 25(OH)D levels using LC-MS/MS, a robust method for measurement of both 25(OH)D3 and 25(OH)D2, iPTH, osteocalcin, beta C terminal cross-linked telopeptides of type I collagen (b-CTXs), procollagen type 1 amino-terminal propeptide (PINP), BMD at L2-L4 and proximal femur, smoking habits, daily dietary calcium intake and alcohol consumption in 181 randomly selected healthy men aged 20-50y.
RESULTS:
The prevalence of vitamin D deficiency (25(OH)D <20ng/ml) was 50.3%. Only 8.8% of the participants had vitamin D sufficiency (25(OH)D ≥30ng/ml). We found a strong correlation between 25(OH)D and smoking in the totality of participants (p<0.001).
25(OH)D level was lower by approximately 4.3 ng/dl (p<0.001) in a smoker compared to a non-smoker among the totality of participants, while this value increased to 9.2ng/ml in the 40-50y subgroup (p=0.003).
A multinomial logistic regression model demonstrated that a young smoker (20-29y) had 58% increased likelihood of having vitamin D deficiency compared to a non-smoker of the same age group (p=0.041).
CONCLUSIONS:
A high prevalence of vitamin D deficiency was identified in a young and middle-aged male population. Smoking is a significant determinant of serum 25(OH)D, while it increases significantly the likelihood of having vitamin D deficiency. In our hands, vitamin D levels are not a determinant of bone turnover and BMD in this population.
PMID: 25402376

According to our data, smokers had lower serum 25(OH)D concentrations than non-smokers. Interestingly, in the totality of participants, smoking was the only significant determinant of serum 25(OH) D among the tested variables (BMI, age, smoking, alcohol consumption and calcium intake). Furthermore, 25(OH)D level was expected to be lower by 4.2 ng/dl in a smoker by comparison with a non-smoker for all age-groups but this value increased to 9.2 ng/ dl for the 40-50y subgroup. This suggests the need for young and especially middle-aged smokers to be screened for vitamin D deficiency.

The negative correlation between 25(OH)D levels and smoking could possibly be explained by the fact that smoking is usually accompanied by a less healthy lifestyle (less physical activity, alcohol consumption and bad dietary habits) leading to reduced sun exposure and thus synthesis of vitamin D. However, a causative role of smoking in vitamin D deficiency could not be excluded; recent studies have in fact shown that metabolic derivatives of nathphalane (a metabolite in cigarette smoke) such as tetralones can inhibit CYP27A1 activity.19

In line with our results, Jaaskelainen et al. studying 5714 subjects (47% men) aged 30-79 years found that smokers had lower serum 25(OH)D concentrations than non-smokers.20 Moreover, Thuesen et al in a recent large population study showed that odds ratios of vitamin D severe deficiency (25(OH)D <10ng/ml)/ vitamin D deficiency (25(OH)D <20ng/ ml) associated with daily smoking was 1.47 and 1.36, respectively.21 In contrast, Scragg et al. in a sample of 295 men aged 35-64 years found that smoking was not correlated with 25(OH)D levels,22 while data from recent studies also agreed with the absence of correlation between smoking and 25(OH)D serum concentrations.23,24 The inconsistency among the various studies could be explained by the different way that smoking is defined, heterogeneity in smoking intensity as well as by the different methodology used to measure serum 25(OH)D. Notably, the Tromso study revealed that determination of serum 25(OH) D using ECLIA (electrochemiluminiscence) resulted in falsely elevated levels of 25(OH)D in smokers, something which does not occur using LC-MS/MS.25 An overestimation of 25(OH)D concentration-due to the methodology used-could possibly overlook detection of a negative correlation between smoking and 25(OH)D levels.

We found no significant correlation between serum 25(OH)D concentration and age, although there was a positive 25(OH)D gradient with age. This observation is inconsistent with earlier studies, which have indicated that serum 25(OH)D concentrations decrease with increasing age.25,26 However, the KNHANES study including 2504 males aged >20 years found that vitamin D deficiency was most prevalent in the age group of 20-29, with a rate of 65%, and least prevalent in the older age subgroups.27 Our findings could be explained by increased prevalence of health-promoting physical activity in older subgroups, thus it is possible that they spend more time outdoors. Moreover, age is positively linked to the daily dietary intakes of vitamin D.23

Our data demonstrated no correlation between BMI and 25(OH)D concentration. Findings from previous studies on the association between serum levels of vitamin D and obesity are conflicting.25,28-30 The Tromso study, although confirming the inverse relationship between BMI and 25(OH)D, noted that this correlation became significant in men with higher BMI levels and more pronounced in subjects with BMI levels greater than 35.25 In our study, although the range of BMI values was wide, the number of obese subjects with BMI >30 was small (n=17), this probably not allowing us to draw statistically significant results.

Similarly to other studies,31,32 we did not find any significant correlation between serum 25(OH)D and calcium, phosphate, PTH as well as bone turnover markers either of bone formation (serum OC, PINP, ALP) or resorption (serum CTXs) in the totality of participants. Looking at the younger subgroup (20- 29y), who had the lower 25(OH)D levels, we did not find any differences in the indices of bone remodeling between smokers and non-smokers, although smoking has been associated with reduced OPG production and increased bone remodeling, as shown by Lappin et al.33

In terms of the routine measurements of calcium, phosphate, ALP and PTH, studies have demonstrated that these parameters are not adequate to identify patients with hypovitaminosis D7,32 and are thus not reliable predictors of hypovitaminosis D.31 Studies of the relationship between vitamin D status and bone turnover have yielded conflicting results,7,34-36 which may be attributed, at least in part, to differences in dietary calcium intake. Notably, several studies supported an inverse relationship between 25(OH)D and serum PTH (and consequently bone turnover markers as a result of secondary hyperparathyroidism) when dietary Ca intake is adequate;37,38 it should be noted that in our study, the daily dietary calcium consumption was very low (on average 328mg/day).

We observed a positive correlation between bone turnover markers and 25(OH)D concentration in the younger age group (20-29y) which cannot be explained. In contrast to our results, Solarz et al.