Rickets, once thought vanquished, is reappearing. In some less developed countries it hardly went away. This seminar reviews the effects of genes, stage of development, and environment on clinical expression of the disease. Rickets can be secondary to disorders of the gut, pancreas, liver, kidney, or metabolism; however, it is mostly due to nutrient deficiency and we concentrate on this form. Although calcium deficiency contributes in communities where little cows' milk is consumed, deficiency of vitamin D is the main cause.
There are three major problems:

A safety net of extra dietary vitamin D should be re-emphasised, not only for children but also for pregnant women.
The reason why many immigrant children in temperate zones have vitamin D deficiency is unclear.
We speculate that in addition to differences in genetic factors, sun exposure, and skin pigmentation, iron deficiency may affect vitamin D handling in the skin or gut or its intermediary metabolism.

Figure 1. Radiograph of wrist showing rickets Classic features of rickets include cupping, fraying, and splaying of the metaphysis. The ulna (which grows more quickly at its distal end) is more severely affected. Widening of the growth plates is not shown because the secondary ossification centres of the radius and ulna are not yet apparent. 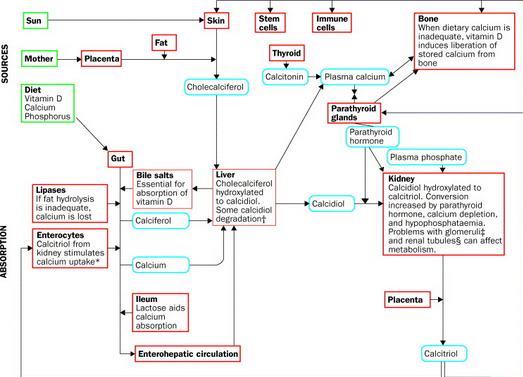 Figure 2. Nutritional handling of calcium, phosphorus, and vitamin D, and the causes of rickets*Enterocyte abnormality (eg, coeliac disease) can inhibit vitamin D and calcium absorption; transport out of the cell is reduced if carrier proteins are inadequate (eg, abetalipoproteinaemia or hypobetalipoproteinaemia34). †Degradation of calcidiol is increased by certain anticonvulsants and in hyperparathroidism (primary or secondary to limited amounts of absorbed calcium35) via the action of calcitriol. Hepatic/bile-duct disease limits bile-acid secretion.36 ‡Any cause of glomerular failure leads to retention of phosphorus with reciprocal hypocalcaemia and secondary hyperparathyroidism.37 §Tubular disorders can lead to excessive phosphaturia.38 Substances produced by some tumours induce phosphaturia leading to rickets before the tumour is clinically obvious.

Figure 4. Dietary reference values (DRV), observed intakes, and food contributions to these intakes of vitamin D and calcium in older infants, toddlers, and pubertal boys in the UKDRV=dietary reference values from UK Department of Health report 1991.123 LRNI=lower reference nutrient intake (values below this are almost certainly inadequate for most individuals). EAR=estimated average requirement. RNI=reference nutrient intake (intakes above this amount will almost certainly be adequate for almost all individuals). NS=not stated. White segments indicate all other sources. *Over age 3 years RNI in the UK for vitamin D is stated as O for “a normal lifestyle”; if “confined indoors” the reference nutrient intake is 10 μg. †Observed intakes, median (3rd–97th centile), abstracted from various UK government reports on representative national samples of the population.124, 125 and 126 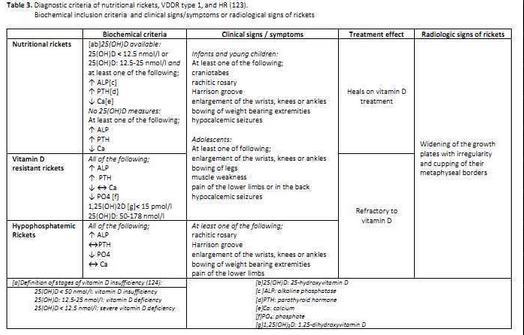 Rickets and vitamin D overview – Lancet 2003         Printer Friendly PDF this page! Follow this page for updates
This page is in the following categories (# of items in each category)
Rickets 123