Does omega-3 have a protective effect on the rat adrenal gland exposed to 900 MHz electromagnetic fields?

Note: Cell phone frequency bands in US and Canada majority are near 900 MHz
The newer cell phones often use a 2X higher frequency – which was not tested by this study

Highlights
• Effects of EMF on the adrenal gland.
• Morphological alterations as a result of EMF exposure.
• The cortex volume increased in the EMF-exposed groups.
• EMF may have an adverse effect on biological tissues.
• Omg-3 therapy suppresses the effects of EMF.

The aim of this study was to investigate the harmful effects of exposure to 900-megahertz (MHz) electromagnetic fields (EMF) and the protective effects of omega-3 (Omg-3) against EMF in the rat adrenal gland. Eighteen Wistar albino rats were randomly assigned into three groups, control (Cont), EMF, and EMF + Omg-3. The EMF and EMF + Omg-3 groups both consisted of six rats exposed to an EMF of 900 MHz for 60 min/day for 15 days. No procedure was applied to the six rats in the Cont group. At the end of the experiment, all rats were sacrificed, and the mean volumes of the cortex and medulla of the adrenal gland were estimated using a stereological counting technique. The stereological results showed that the mean volume of the adrenal gland increased significantly in the EMF-exposed groups compared to the Cont group. Additionally, the mean volume of the adrenal gland was significantly lower in the EMF + Omg-3 group compared to the EMF group. We suggest that Omg-3 therapy aimed at suppressing the effects of EMF may prove a safe alternative for animals, whether or not they are exposed to EMF. 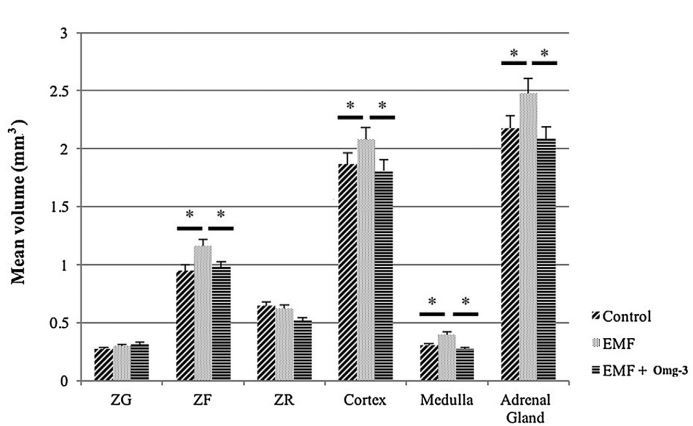 Fig. 4. After EMF exposure, general structures of cells in the medulla of adrenal gland were impaired, if EMF exposed group is compared to the EMF + Omg-3 exposed. Not only the most of organelles are lost in the EMF exposed group (arrowheads) but also the border of cells in this group cannot be seen clearly. The protective effects of Omg-3 are clearly observed.

Omega-3 prevented radio frequency (cell phone) damage to rats – Dec 2017         Printer Friendly PDF this page! Follow this page for updates
This page is in the following categories (# of items in each category)
Vitamin D and Omega-3 332

Cell tower removed from school after 4 children and 3 teachers got cancer – M...