MS prevelance over 60 years for 1 county in Norway 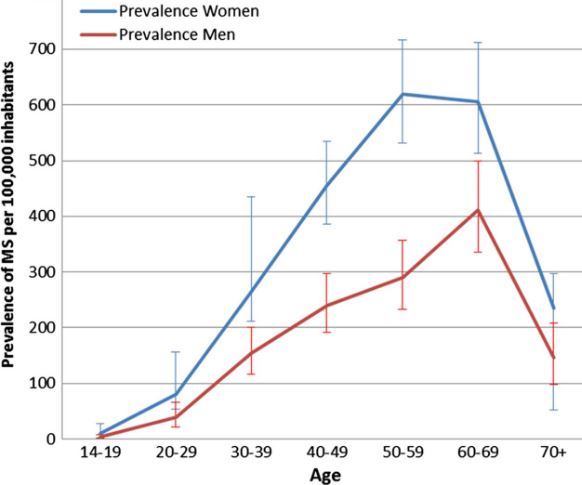 Vitamin D3 (VitD) insufficiency is postulated to represent a major modifiable risk factor for multiple sclerosis (MS). While low VitD levels strongly correlate with higher MS risk in white populations, this is not the case for other ethnic groups, suggesting the existence of a genetic component. Moreover, VitD supplementation studies in MS so far have not shown a consistent benefit. We sought to determine whether direct manipulation of VitD levels modulates central nervous system (CNS) autoimmune disease in a sex-by-genotype-dependent manner. To this end, we used a dietary model of VitD modulation, together with the autoimmune animal model of MS, experimental autoimmune encephalomyelitis (EAE). To assess the impact of genotype-by-VitD interactions on EAE susceptibility, we utilized a chromosome substitution (consomic) mouse model that incorporates the genetic diversity of wild-derived PWD/PhJ mice. High VitD was protective in EAE in female, but not male C57BL/6J (B6) mice, and had no effect in EAE-resistant PWD/PhJ (PWD) mice. EAE protection was accompanied by sex- and genotype-specific suppression of proinflammatory transcriptional programs in effector CD4 T effector cells, but not CD4 Treg cells. Decreased expression of proinflammatory genes was observed with high VitD in female CD4 T cells, specifically implicating a key role of MHC class II genes, interferon gamma, and Th1 cell-mediated neuroinflammation. In consomic strains, effects of VitD on EAE were also sex- and genotype-dependent, whereby high VitD: 1) was protective, 2) had no effect, and, 3) unexpectedly had disease-exacerbating effects. Systemic levels of 25(OH)D differed across consomic strains, with higher levels associated with EAE protection only in females. Analysis of expression of key known VitD metabolism genes between B6 and PWD mice revealed that their expression is genetically determined and sex-specific, and implicated Cyp27b1 and Vdr as candidate genes responsible for differential EAE responses to VitD modulation. Taken together, our results support the observation that the association between VitD status and MS susceptibility is genotype-dependent, and suggest that the outcome of VitD status in MS is determined by gene-by-sex interactions.

Free PDF should be available after July 2018

Amyloid brain plaque both prevented and removed by high vitamin D (in mice) –...