Most sunscreens actually increase the growth of skin cancer - May 2010

Latest report warns that most sunscreens may offer more harm than benefit May 24, 2010


As summertime approaches and residents and visitors flock to South Florida beaches and swimming spots there are more hazards present than oil slicks, alligators, or sharks in the water. Naturally, the risk of sunburn increases during summer months. This leads many to cover their exposed skin with various sunscreen products, believing that these protect the skin from harm.

However, research publicized by the Environmental Working Group (EWG) has shown that most sunscreens may present more harm than benefit. http://www.aolnews.com/health/article/study-many-sunscreens-may-be-accelerating-cancer/19488158 Skin cancer rates continue to rise and sunblocks fail to prevent long-term damage from the UV light exposure associated with skin cancers. Furthermore, many sunscreens contain hormone disruptors and Vitamin A derivatives that can foster skin cancers when applied topically and exposed to the sun.

The FDA has acknowledged that SPF factors reported by sunblock makers are often misleading, yet the manufacturers continue to include these misleading numbers on their products.

In the EWG's annual report on sunscreens only 39 of 500 products tested were deemed safe and effective for consumers to use.

None of the sunscreens widely sold in the USA are considered ideal by the EWG, as an ideal sunscreen would have to


In light of these findings consumers may want to consider traditional methods of sun protection - clothing, hats, umbrellas, natural shade, and avoiding exposure during mid-day hours. Good nutrition and anti-oxidant supplementation are also helpful in preventing and repairing damage caused by excessive sun exposure. Exposure to sunlight is healthy in moderation, so we can learn to manage our sun exposure to gain the benefits of sunlight (such as Vitamin D) while minimizing the hazards of being exposed for too long. So far, efforts to use chemicals on the skin to prevent sun damage seem to have backfired, as they've merely suppressed nature's warning to us that we've been in the sun too long, offering a false sense of protection.

Lack of vitamin D, such as by the use of sunscreen has been found to increase by more than 10X the caners in the body
Sunscreens tend to result in getting more UV into the eyes -> more cataracts

Graph from EWG which shows that vitamin A in skin cream INCREASES the grown of skin tumors, especially when exposed to UV = sunshine

Many sunscreen products do NOT block the upper UVA 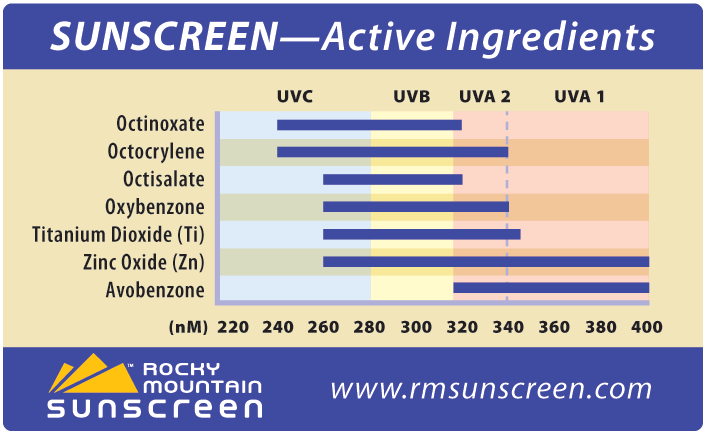 Report of the same EWG information from Fast Company Sept 2010


Chalk one up for the sun in the ongoing battle to keep ourselves from frying. A study by the nonprofit Environmental Working Group (EWG) of 446 beach and sport sunscreens with SPF ratings of 30+- -all sold in the U.S.- -found that a whopping 284 sunscreens offer minimal protection from ultraviolet A (UVA) rays, which can burn us even on cloudy days.

Among the popular brands that offer high SPF ratings but low UVA protection: Banana Boat, Coppertone, Fruit of the Earth, and Panama Jack. These brands- -along with hundreds of others- -fail to protect against between 90% and 99% of the ultraviolet light that reaches us every day.

Why the widespread lack of UVA protection? The FDA, which hasn't updated its sunscreen regulations in more than 30 years, is largely to blame. None of those 284 sunscreens The EWG explains:

A major obstacle to progress is the federal Food and Drug Administration, which has never managed to sign, seal and deliver the sunscreen regulations it began developing in 1978. The latest draft of those rules was issued in 2007 but ended up in regulatory limbo, where it remains. Even though it can't seem to close the deal on its regulation, the FDA insists that manufacturers who make sunscreens for the American market stick to a list of 17 ingredients ... By contrast, sunscreen makers catering to the European market can choose among 28 active ingredients.


The EWG claims that many of the ingredients used on the European market, including Tinosorb S, Tinosorb M and Mexoryl SX, are nontoxic. But the FDA hasn't completed safety and effectiveness for the Europe-approved compounds, so it's hard to say definitively.

The FDA's failure to pass sunscreen regulations has also allowed sunscreens with potentially cancer-triggering ingredients on the market; a form of vitamin A called retinyl palmitate, found in 41% of sunscreens, is thought to speed up skin damage and increase skin cancer risk when applied to the face, arms, legs, back, and chest. Clearly, it's time to ramp up the pressure on the FDA to produce new regulations.

Most sunscreens actually increase the growth of skin cancer - May 2010         Printer Friendly PDF this page! Follow this page for updates
This page is in the following categories (# of items in each category)
Noontime sun and D 312 UV and Vitamin D 361 Cancer - Skin 115

Difficult to get 1000 IU of vitamin D in 30 minutes If UVI less than 3 – Apri...Overview UV and vitamin DScared Out of the Sun for Fifty Years – Jan 2011The Greatest Public Health Mistake of the 20th Century (sunscreen block Vitam...Widespread regular sunscreen application deemed not useful in the US – April ...