Background: Understanding of the role of vitamin D in health and disease has increased markedly in the past decade, with its involvement extending well beyond traditional roles in calcium and phosphate homeostasis and musculoskeletal health. This conceptual expansion has been underpinned by identification and exploration of components of this axis including vitamin D-binding protein, key enzymes and receptors in multiple cell types, and a greater recognition of nonclassical autocrine and paracrine effects. Its influence in IBD remains uncertain.

Aim: To review the role of vitamin D in bone health, immune regulation and cancer prevention in IBD, and to outline practical issues and limitations of its use.

Methods: An extensive online literature review including PubMed and Medline.

Results: In patients with IBD, the vitamin D axis provides an important and often underutilised pathway to preserving bone health. Furthermore, an exciting body of clinical and basic science research demonstrates that these pathways may have an integral part to play in regulation of the immune response in IBD, through effects on the intestinal barrier, antigen presenting cells and adaptive T cells. The possibility of chemoprevention requires further study.
The optimal target level of 25-hydroxy vitamin D in patients with IBD is currently uncertain, as is the best therapeutic modality. 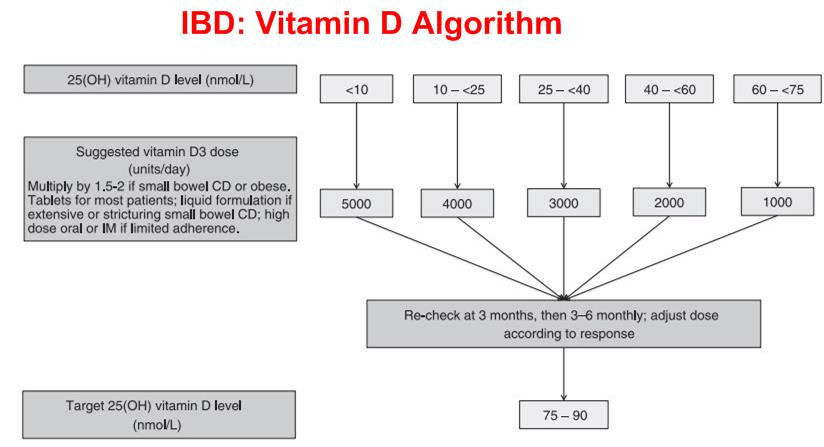 Inflammatory bowel disease and vitamin D – review Aug 2012         Printer Friendly PDF this page! Follow this page for updates
This page is in the following categories (# of items in each category)
Gut 169