Overall, no statistically significant changes in CRP, IL-6, IL-10, and sTNF-R2 were observed after vitamin D supplementation period. Baseline CRP was significantly inversely associated with baseline 25(OH)D level (p<0.001) in unadjusted and adjusted models. An interaction between baseline 25(OH)D and vitamin D supplementation was observed for outcome change in log CRP (Month 3-Month 0) (p for interaction=0.04). Within an unselected population of African-Americans, short-term exposure to vitamin D supplementation produced no change in circulating inflammatory markers. This study confirms the strong independent association of CRP with 25(OH)D status even after adjusting for BMI. Future studies of longer supplemental vitamin D3 duration are necessary to examine the complex influence of vitamin D3 on CRP and other chronic inflammatory cytokines for possible reduction of cancer health disparities in African-Americans.

Doubt that very many of the African-Americans in that short of time, without a loading dose, got to a useful amount (>30 ng) of vitamin D in their blood.
Would most likely have reduced inflammation markers if any of the following:

but it took 2 months of 4,000 IU of vitamin D to get blood levels high enough to start to be of any use
The dashed line is the average for African Americans 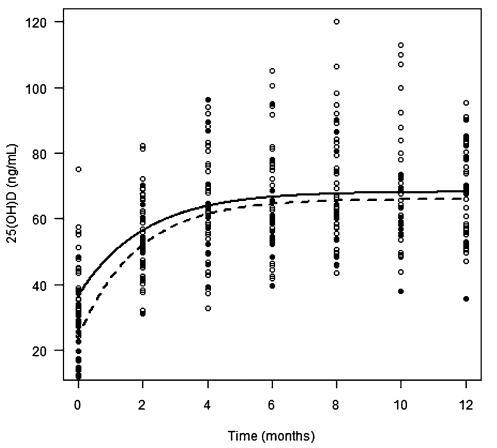 Inflammation in African Americans not reduced with 3 months of 4000 IU of vitamin D – RCT Dec 2013         Printer Friendly PDF this page! Follow this page for updates
This page is in the following categories (# of items in each category)
Skin - Dark 452 Intervention 752 Inflammation 157