Effects of a simple home exercise program and vitamin D supplementation on health-related quality of life after a hip fracture: a randomized controlled trial

Note: Daily vitamin D takes many months to achieve a level which provides a benefit
Note: This study did not notice a benefit until 6 months
Would most likely have had far better benefit if had started with a loading dose
Would also have had better benefit if 4,000 IU was used a maintenance dose, not just 2,000 IU
Best: Have good level of vitamin D months earlier, and reduce the risk of both falling and fracture 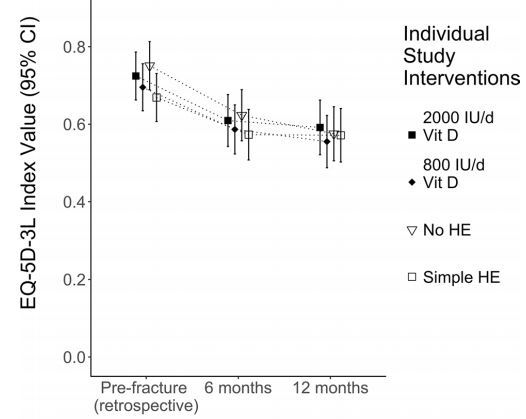 Purpose: To test the effects of vitamin D intervention and a simple home exercise program (HE) on health-related quality of life (HRQL) in the first 12 months after hip fracture.

Methods
HRQL was reported in 173 acute hip fracture patients (mean age 84 years, 79% females, 77% community dwelling) who were enrolled in the 12-month 2 × 2 factorial Zurich Hip Fracture Trial. Pre-fracture HRQL was assessed at baseline (4.2 ± 2.2 days post-surgery) and then again at 6 and 12 months after hip fracture surgery by the EuroQol EQ-5D-3L index value (EQ-5D-3L questionnaire). The effects of vitamin D intervention (2000 vs. 800 IU vitamin D3) and exercise (HE vs. no HE) or of the combined interventions on HRQL were assessed using multivariable-adjusted repeated-measures linear mixed-effects regression models.

Results
The EQ-5D-3L index value significantly worsened from 0.71 pre-fracture to 0.57 over 12 months, but the degree of worsening did not differ between individual or combined interventions. However, regarding only the late recovery between 6 and 12 months, the group receiving neither intervention (800 IU/day and no HE) experienced a significant further decline in the EQ-5D-3L index value (adjusted mean change = 0.08 [95% CI 0.009, 0.15], p = 0.03) while all other groups remained stable.

Conclusion
Hip fractures have a long-lasting negative effect on HRQL up to 12 months after hip fracture. However, HE and/or 2000 IU vitamin D per day may help prevent a further decline in HRQL after the first 6 months following the acute hip fracture event.

Following hip fracture 2,000 IU of vitamin D daily improved quality of life – Feb 2019         Printer Friendly PDF this page! Follow this page for updates
This page is in the following categories (# of items in each category)
Falls and Fractures 225 Quality of Life 22