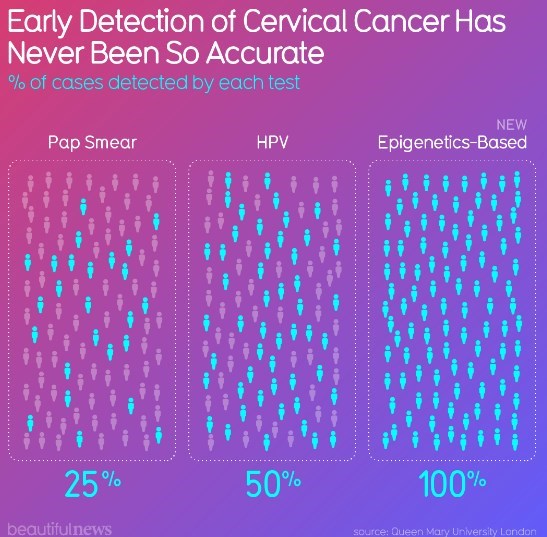 Chart from Information is Beautiful

A new test for cervical cancers has a 100% detection rate. In a clinical trial of over 15,000 women, it identified everything. Perfectly. It could revolutionise screening. And it could work out cheaper, too.

Feb 2019 description of the study includes the following

Pap tests (or Pap smears) look for abnormalities and precancers through microscopic examination of the cells in the cervix. An HPV test checks for the actual virus rather than for changes in the cervical cells. Although HPV is the leading cause of most CC, it does not necessarily indicate cancer. In fact, many women who test positive for an HPV infection will eventually clear the virus and not develop the disease, warranting unnecessary worry.

The new test analyzes the DNA of the cells. But, instead of checking for variations in the genetic code that would indicate something specific like the HPV virus, the new test inspects for chemical markers or tags that appear on top the DNA, shaping what is called the ‘epigenetic profile’.

Epigenetics is the study of changes in gene expression. Essentially, it refers to chemical and/or other modifications that regulate how genes behave, telling them whether to be turned on or off. Numerous studies have shown how a person’s epigenetic profile can influence their health, even lead to complications later on in life. What’s more is that disruption in the epigenome is known to play a critical role in cancer development.