Companies and individuals will benefit from more vitamin D

Individuals want to avoid sickness for a variety of reasons:

Mass vitamin D supplementation would save about $1346 per year in healthcare costs per person in the U.S.,
or over $4000 a year for a family of three.

Costs to provide 3000 international units of daily supplemental vitamin D would be about $10/year per person.
http://lewrockwell.com/sardi/sardi111.html March 4 2009 issue of Progress in Biophysics and Molecular Biology.
- - - - - - - - -

That has left nearly half the working-age population without enough protection from illness.
Altogether, 44% of U.S. adults were either uninsured or underinsured last year, according to the Commonwealth Fund.
The erosion in insurance coverage, which hit middle- and low-income Americans hardest, meant higher medical bills for U.S. families. The typical family of four with employer-based coverage saw its total monthly healthcare tab almost double between 1999 and 2009 — from $805 to $1,420 — researchers at the Rand Corp. found. Over the same period, total monthly income grew only 30%, barely keeping pace with inflation, which pushed up prices 29% over the decade.

Among the largest employers, about 28 percent vary their premiums based on tobacco use.

However, companies may not want to improve retiree health

This caused the failure of my health information service in 1985
If retirees lived longer the companies would have to pay our more retirement benefits.
Would be interesting to see if the additional costs for retirement benefits would be compensated by reduced end-of-life costs for health retirees
That is, the squaring of the curve: health vs years. as following graphic shows 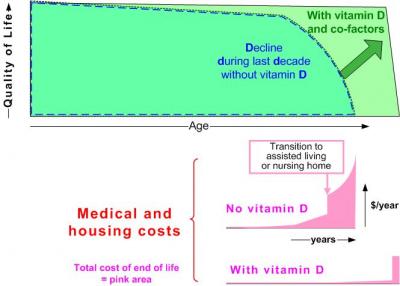 Bus drivers, teachers, pilots, ...
Got to wondering - would it be possible for companies to pay people to take vitamin D so as to decrease sick-leave
Assume that during the winter, in Northern regions, that the sick-leave rate which can be prevented by vitamin D is 0.5%
Assume that the per-day cost of a substitute is $200
Then break-even point would be to pay all employees would be $1/day - which might pay for the vitamin D, co-factors, and tests.

Companies might start with the low-hanging fruit = giving vitamin D to:

Deductible costs are really going up

Dental costs are sometimes not covered - especially retiree (such as myself)

Must not forget health care costs of the unemployed

Must not forget the retiree who leaves the country (true for the US, how about others?) 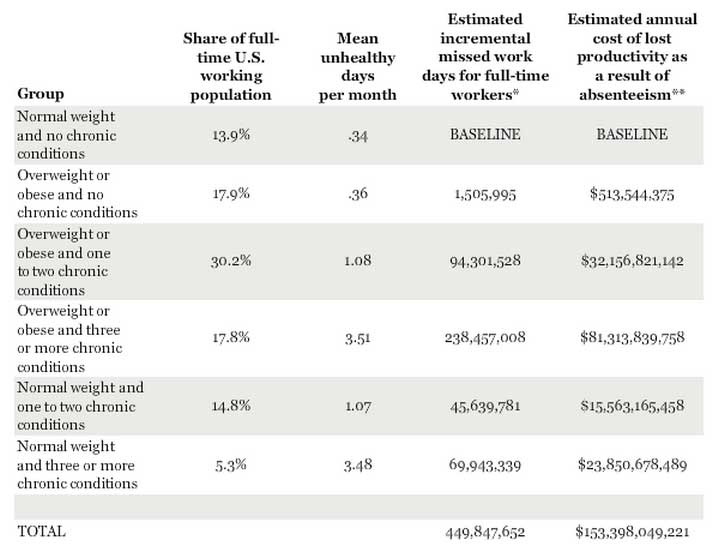 Economic Impact of Obesity in the United States - 2010

Types of medical concerns: short term - surgeries, etc vs. death and disability - which are the large $$ items for which groups
Hip fracture ==> lose independence, high cost of nursing home, etc.
- - - - - - - -

Companies and individuals will benefit from more vitamin D         Printer Friendly PDF this page! Follow this page for updates
This page is in the following categories (# of items in each category)
Cost savings with Vitamin D 142