Coffee consumption and risk of fractures: A systematic review and dose–response meta-analysis - June 2014 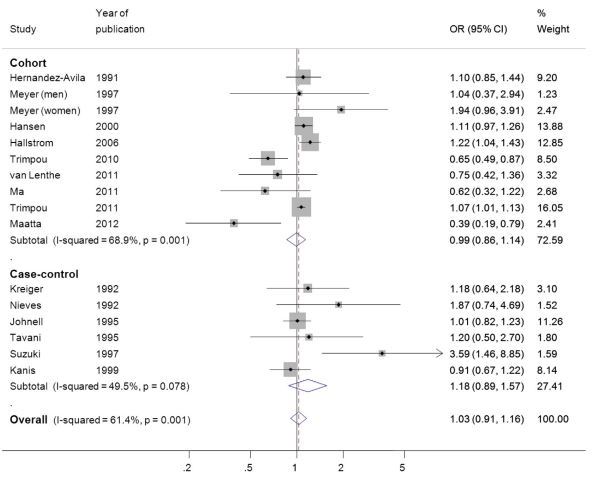 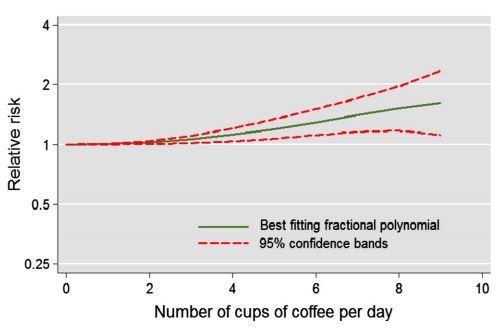 INTRODUCTION:
The aim of this study was to determine the best site for bone mineral density (BMD) measurements based on T-scores, age, and beverage consumption.

MATERIAL AND METHODS:
In this prospective study, 271 women stratified by age (average age: 61.9 years) underwent dual energy X-ray absorptiometry (DEXA) scanning of their lumbar spine, hips, and forearms. Osteoporosis was defined as a BMD of 2.5 standard deviations or more below the mean peak bone mass based on a reference population of adult women (translated as a T-score ≤ -2.5), as measured by DEXA. Participants were also evaluated regarding alcohol and caffeine consumption by a semiquantitative questionnaire.

BACKGROUND:
Drinking coffee has been linked to reduced calcium conservation, but it is less clear whether it leads to sustained bone mineral loss and if individual predisposition for caffeine metabolism might be important in this context. Therefore, the relation between consumption of coffee and bone mineral density (BMD) at the proximal femur in men and women was studied, taking into account, for the first time, genotypes for cytochrome P450 1A2 (CYP1A2) associated with metabolism of caffeine.

METHODS:
Dietary intakes of 359 men and 358 women (aged 72 years), participants of the Prospective Investigation of the Vasculature in Uppsala Seniors (PIVUS), were assessed by a 7-day food diary. Two years later, BMD for total proximal femur, femoral neck and trochanteric regions of the proximal femur were measured by Dual-energy X-ray absorptiometry (DXA). Genotypes of CYP1A2 were determined. Adjusted means of BMD for each category of coffee consumption were calculated.

RESULTS:
Men consuming 4 cups of coffee or more per day had 4% lower BMD at the proximal femur (p = 0.04) compared with low or non-consumers of coffee. This difference was not observed in women. In high consumers of coffee, those with rapid metabolism of caffeine (C/C genotype) had lower BMD at the femoral neck (p = 0.01) and at the trochanter (p = 0.03) than slow metabolizers (T/T and C/T genotypes). Calcium intake did not modify the relation between coffee and BMD.

CONCLUSION:
High consumption of coffee seems to contribute to a reduction in BMD of the proximal femur in elderly men, but not in women. BMD was lower in high consumers of coffee with rapid metabolism of caffeine, suggesting that rapid metabolizers of caffeine may constitute a risk group for bone loss induced by coffee.

High consumption of coffee has been suggested to reduce the risk of some late-onset diseases and death but also to contribute to the development of osteoporotic fractures. Results of previous fracture studies have been inconsistent, and a comprehensive study is needed. The longitudinal population-based Swedish Mammography Cohort, including 61,433 women born in 1914-1948, was followed up from 1987 through 2008. Coffee consumption was assessed with repeated food frequency questionnaires. During follow-up, 14,738 women experienced fracture of any type, and 3,871 had a hip fracture. In a subcohort (n = 5,022), bone density was measured and osteoporosis determined (n = 1,012). After multivariable adjustment, there was no evidence of a higher rate of any fracture (hazard ratio per 200 mL coffee = 0.99; 95% confidence interval: 0.98, 1.00) or hip fracture (hazard ratio per 200 mL coffee = 0.97, 95% confidence interval: 0.95, 1.00) with increasing coffee consumption. A high coffee intake (≥4 cups daily) versus a low intake (<1 cup daily) was associated with a 2%-4% lower bone density, depending on site (P < 0.001), but the odds ratio for osteoporosis was only 1.28 (95% confidence interval: 0.88, 1.87). Thus, high coffee consumption was associated with a small reduction in bone density that did not translate into an increased risk of fracture.

BACKGROUND: This study was aimed at estimating the associations between coffee intake and osteoporosis (OP) in Chinese postmenopausal women.

METHODS: We conducted a large-scale, community-based, cross-sectional study to investigate the associations by using self-report questionnaire to access frequency of coffee intake. The total of 1817 participants was available to data analysis in this study. Multiple regression models controlling for confounding factors to include frequency of coffee intake variable were performed to investigate the relationships for OP.

CONCLUSION: The findings indicated that frequency of coffee intake was independently and significantly associated with OP. The prevalence of OP was more frequent in Chinese postmenopausal women not preferring coffee habits.

Three to four cups of coffee a day linked to longer life
Three or 4 cups a day confers greatest benefit, except in pregnancy and for women at risk of fracture
Reporting on publication in the British Medical Journal of 200 studies 10.1136/bmj.j5024
&nbspDownload the PDF from VitaminDWiki

High vs Low amount of Coffee 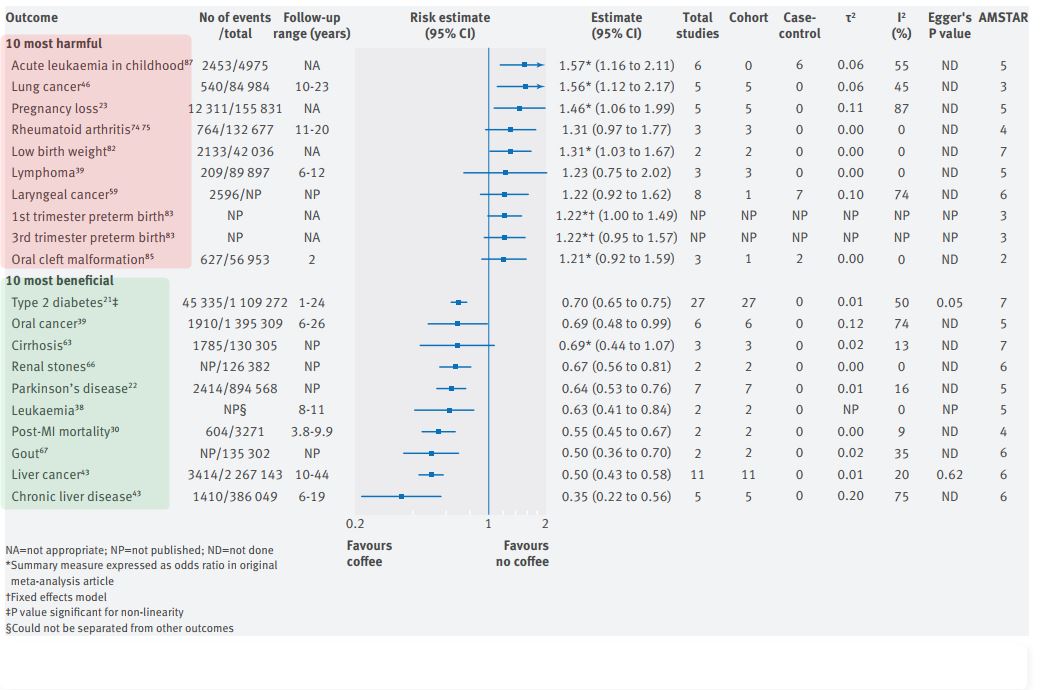 Note: Coffee has been known to reduce Gout since 1672

4 cups of coffee increases risk of fracture - meta-analysis 2014         Printer Friendly PDF this page! Follow this page for updates
This page is in the following categories (# of items in each category)
Interactions with Vitamin D 106 Women 165