The full issue of Medicographia, which includes the article: CONTROVERSIAL QUESTION, Is systematic supplementation with calcium/vitamin D necessary to treat postmenopausal osteoporosis? Is attached at the bottom of this page 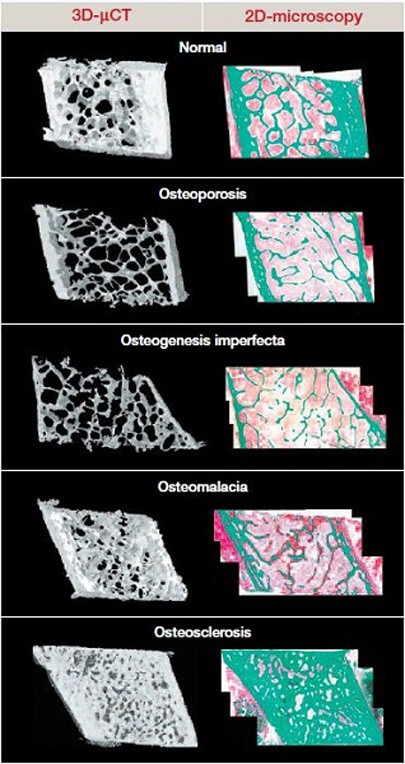 OI is a genetic disorder of collagen synthesis characterized by fragile bones with recurrent fractures resulting in skeletal deformity. The phenotype ranges from cases that are lethal in the perinatal period to mild cases diagnosed in adulthood.32 The abnormal quantity of collagen and its poor quality interfere with mineral crystal size, accounting for low bone mass and bone fragility. Themicroarchitecture is also affected due to fewer and thinner trabeculae and decreased bone formation at cellular level. Taken together, these abnormalities severely impair resistance to load and torsion stress.

Osteomalacia and rickets are characterized by a defect of primary mineralization due to calcium and/or phosphate deficiency. Osteomalacic bone comprises a very small amount ofmineralized tissue with an accumulation of osteoid (nonmineralized newly formed bone), due to delay between bone matrix deposition and mineralization onset. In addition, bone resorption is usually increased, and trabecular microarchitecture impaired, in cases of secondary hyperparathyroidism due to calcium malabsorption. Biomechanical properties are thus markedly impaired, with weakened bones at risk of fracture from minimal trauma.31

The World Health Organization and International Osteoporosis Foundation define osteoporosis as “a systemic skeletal disease characterized by low-bone mass and microarchitectural deterioration of bone tissue, leading to enhanced bone fragility and a consequent increase in fracture risk.”33 Estrogen deficiency is the most important factor in the pathogenesis of postmenopausal osteoporosis. Its main effects are to increase bone resorption and remodeling. These may be transient, but in combination they accelerate trabecular microarchitectural damage, such as increased spacing (loss of interconnectivity), reduced thickness, induced perforation, and ultimately transformation of the 3D structure from plates to rods.31 Estrogen withdrawal compounds the effect of aging on cortical bone by slowing periosteal apposition while maintaining vigorous endocortical resorption, resulting in a gradually thinner cortex and net bone loss. In more severe cases, erosion of endocortical bone leads to the trabecularization of cortical bone by producing irregularly shaped giant canals and allowing adjacent resorptive cavities to coalesce, thereby blurring the distinction between cortical and trabecular bone. The combination of such cortical changes with structural deterioration of the trabecular network accounts for postmenopausal bone fragility.25

A prospective study using 2D histomorphometry and 3D microcomputed tomography (μCT) found significant microarchitectural abnormalities in bone biopsies from premenopausal women with idiopathic osteoporosis (IOP) compared with normal women. Cortices were thinner and trabeculae fewer, thin- ner, more widely separated, and heterogeneously distributed.34 Although these architectural changes resemble those in postmenopausal women, high bone turnover does not seem to be involved. Some of the affected women showed osteoblast dysfunction, with repercussions on bone formation and microstructure, but there was no evidence of an association with IGF-I, in contrast to men with IOP, where low serum IGF-I directly induces osteoblast dysfunction, resulting in low bone mineral density. Further studies are needed to determine the factors involved in the pathogenesis of IOP in premenopausal women.

Bone diseases involving very high bone formation rates (fibrous dysplasia, metastatic bone in bone metastases, Paget’s disease) synthesize bone matrix in an anarchic pattern that lays down collagen fibers in random directions. The biomechanical properties of the resulting woven or nonlamellar bone are poorer than those of lamellar bone, despite its greater mineralization.35,36

Although it is the main aim of osteoporosis treatments, an increase in bone mass only partly accounts for the resulting decrease in fracture incidence. Studies using quantitative techniques are now seeking to identify the effects of these therapies on bone microarchitecture.

In postmenopausal women, a high proportion of nonvertebral fractures occur at sites comprising between 70% and 80% of cortical bone. Recent reports have paid particular attention to the Haversian canals that traverse the cortex carrying blood vessels and sympathetic nerve fibers. They provide an appropriate surface for bone remodeling. 3D μCT quantification has shown that cortical fragility in osteoporotic women is partly due to bone loss associated with increased intracortical porosity. The same study found that antiresorptive agents not only improved trabecular bone microarchitecture, but also lowered the number and size of cortical pores, which could explain the observed reduction in nonvertebral fracture risk.37

Strontium ranelate is an antiosteoporotic treatment with a dual mode of action. Rizzoli et al recently showed that treatment for 2 years significantly improved bone microarchitecture as well as bone resistance. Improvement was significant not only versus baseline, but also versus bisphosphonate.39

Several agents with different modes of action are available to treat osteoporosis. Yet few studies have investigated the impact of switching therapies on bone cells and microstructure. Jobke et al recently reported that the bone of osteoporotic patients switched from an antiresorptive agent (bisphosphonate) to strontium ranelate responds by trabecular reorganization. Bone biopsy histomorphometry and μCT just one year after the switch to strontium ranelate revealed a substantial increase in bone volume fraction and enhanced indices of connectivity density, structure model index, and trabecular bone pattern factors, indicating that it was the architectural transformation from trabecular rods to plates that was responsible for the bone volume increase, rather than changes in trabecular thickness and number.40

3D images of bone plus position statements on Osteo and vitamin D – 2012         Printer Friendly PDF this page! Follow this page for updates
This page is in the following categories (# of items in each category)
Bone - Health 267 Osteoporosis 190