Vitamin C is important for the common cold and much else

A doctor got me interested in re-looking at vitamin C in Jan 2013
In his practice he increases all patients to 80 ng of vitamin D and makes sure that they have a high level of Magnesium and Vitamin C.
He found that some people need as much as 12 grams per day to get the right levels in their blood

A combination of high-dose vitamin C plus zinc for the common cold.

Vitamin C and zinc play important roles in nutrition, immune defence and maintenance of health. Intake of both is often inadequate, even in affluent populations. The common cold continues to place a great burden on society in terms of suffering and economic loss. After an overview of the literature on the effects of the separate administration of either vitamin C or zinc against the common cold, this article presents data from two preliminary, double-blind, randomized, placebo-controlled trials, conducted with a combination of 1000 mg vitamin C plus 10 mg zinc in patients with the common cold.
In both studies, a nonsignificant reduction of rhinorrhoea duration (range 9-27%) was seen. In pooled analyses of both studies (n=94), vitamin C plus zinc was significantly more efficient than placebo at reducing rhinorrhoea over 5 days of treatment. Furthermore, symptom relief was quicker and the product was well tolerated. In view of the burden associated with the common cold, supplementation with vitamin C plus zinc may represent an efficacious measure, with a good safety profile, against this infectious viral disease.

A concentration-function approach to vitamin C (ascorbate) has yielded new physiology and pharmacology discoveries. To determine the range of vitamin C concentrations possible in humans, pharmacokinetics studies were conducted.

They showed that when vitamin C is ingested by mouth, plasma and tissue concentrations are tightly controlled by at least 3 mechanisms in healthy humans:

Although ascorbic acid is an important water-soluble antioxidant and enzyme cofactor in plants and animals, humans and some other species do not synthesize ascorbate due to the lack of the enzyme catalyzing the final step of the biosynthetic pathway, and for them it has become a vitamin. This review focuses on the role of ascorbate in various hydroxylation reactions and in the redox homeostasis of subcellular compartments including mitochondria and endoplasmic reticulum. Recently discovered functions of ascorbate in nucleic acid and histone dealkylation and proteoglycan deglycanation are also summarized. These new findings might delineate a role for ascorbate in the modulation of both pro- and anti-carcinogenic mechanisms. Recent advances and perspectives in therapeutic applications are also reviewed. On the basis of new and earlier observations, the advantages of the lost ability to synthesize ascorbate are pondered. The increasing knowledge of the functions of ascorbate and of its molecular sites of action can mechanistically substantiate a place for ascorbate in the treatment of various diseases.

Vitamin C (ascorbic acid, ascorbate) has a controversial history in cancer treatment. Emerging evidence indicates that ascorbate in cancer treatment deserves re-examination. As research results concerning ascorbate pharmacokinetics and its mechanisms of action against tumor cells have been published, and as evidence from case studies has continued to mount that ascorbate therapy could be effective if the right protocols were used, interest among physicians and scientists has increased. In this review, high-dose vitamin C therapy in cancer treatment is re-evaluated.

BACKGROUND: An inflammatory component is present in the microenvironment of most neoplastic tissues. Inflammation and elevated C-reactive protein (CRP) are associated with poor prognosis and decreased survival in many types of cancer.Vitamin C has been suggested as having both a preventative and therapeutic role in a number of pathologies when administered at much higher-than-recommended dietary allowance levels.Since in vitro studies demonstrated inhibition of pro-inflammatory pathways by millimolar concentrations of vitamin C, we decided to analyze the effects of high dose IVC therapy in suppression of inflammation in cancer patients.

METHODS: 45 patients with prostate cancer, breast cancer, bladder cancer, pancreatic cancer, lung cancer, thyroid cancer, skin cancer and B-cell lymphoma were treated at the Riordan Clinic by high doses of vitamin C (7.5 g -50 g) after standard treatments by conventional methods.CRP and tumor markers were measured in serum or heparin-plasma as a routine analysis. In addition, serum samples were collected before and after the IVCs for the cytokine kit tests.

RESULTS: According to our data positive response to treatment, which was demonstrated by measurements of C- reactive protein, was found in 75% of patients and progression of the inflammation in 25% of patients. IVC treatments on all aggressive stage cancer patients showed the poor response of treatment.There was correlation between tumor markers (PSA, CEA, CA27.29 and CA15-3) and changes in the levels of C-reactive protein.Our test of the effect of IVC on pro-inflammatory cytokines demonstrated that inflammation cytokines IL-1α, IL-2, IL-8, TNF-α, chemokine eotaxin and CRP were reduced significantly after treatments.

A portion of the table of diseases and CRP 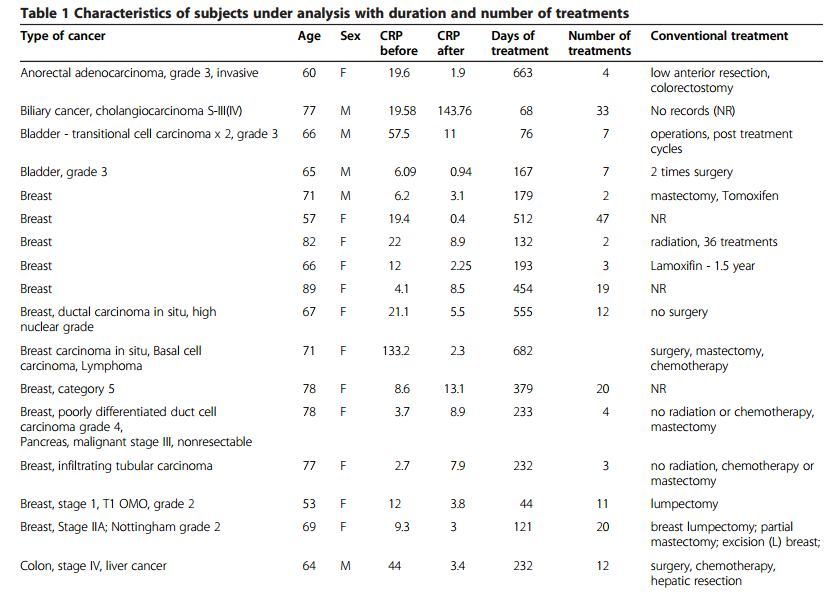 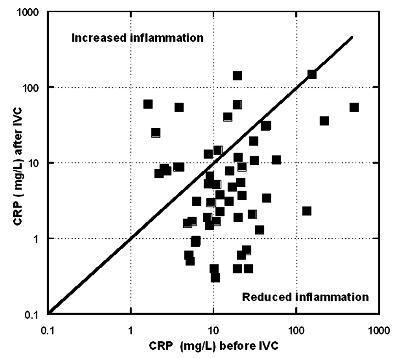 What is the optimum intake of vitamin C in humans?

The recommended dietary allowance (RDA) of vitamin C has traditionally been based on the prevention of the vitamin C deficiency disease, scurvy. While higher intakes of vitamin C may exert additional health benefits, the limited Phase III randomized placebo-controlled trials (RCTs) of vitamin C supplementation have not found consistent benefit with respect to chronic disease prevention. To date, this has precluded upward adjustments of the current RDA. Here we argue that Phase III RCTs-designed principally to test the safety and efficacy of pharmaceutical drugs-are ill suited to assess the health benefits of essential nutrients; and the currently available scientific evidence is sufficient to determine the optimum intake of vitamin C in humans.
This evidence establishes biological plausibility and mechanisms of action for vitamin C in the primary prevention of

and is buttressed by consistent data from prospective cohort studies based on blood analysis or dietary intake and well-designed Phase II RCTs.
These RCTs show that vitamin C supplementation

which are independent risk factors of cardiovascular diseases and certain cancers.
Furthermore, vitamin C acts as a biological antioxidant that can lower elevated levels of oxidative stress, which also may contribute to chronic disease prevention. Based on the combined evidence from human metabolic, pharmacokinetic, and observational studies and Phase II RCTs, we conclude that 200 mg per day is the optimum dietary intake of vitamin C for the majority of the adult population to maximize the vitamin's potential health benefits with the least risk of inadequacy or adverse health effects.

PMID: 22698272
No PDF available. _Note: Pauling Institute does not appear to believe in Orthomolecular Medicine as defined by Linus Pauling.

OBJECTIVE: The objective was to conduct a systematic review and meta-analysis of clinical trials that examined the effects of vitamin C supplementation on BP.

DESIGN: We searched Medline, EMBASE, and Central databases from 1966 to 2011. Prespecified inclusion criteria were as follows: 1) use of a randomized controlled trial design; 2) trial reported effects on systolic BP (SBP) or diastolic BP (DBP) or both; 3) trial used oral vitamin C and concurrent control groups; and 4) trial had a minimum duration of 2 wk. BP effects were pooled by random-effects models, with trials weighted by inverse variance.

In trials in hypertensive participants, corresponding reductions in SBP and DBP were -4.85 mm Hg (P < 0.01) and -1.67 mm Hg (P = 0.17).
After the inclusion of 9 trials with imputed BP effects, BP effects were attenuated but remained significant.

{Note: this is very similar to the amount of reduction of hypertension due to having more vitamin D}

Inverse association of vitamin C with cataract in older people in India.

OBJECTIVE: To examine the association between vitamin C and cataract in the Indian setting.

MAIN OUTCOME MEASURES: Cataract and type of cataract were graded from digital lens images using the Lens Opacity Classification System III (LOCS III), and cataract was classified from the grade in the worse eye of ≥4 for nuclear cataract, ≥3 for cortical cataract, and ≥2 for posterior subcapsular cataract (PSC). Any cataract was defined as any unoperated or operated cataract.

CONCLUSIONS: We found a strong association with vitamin C and cataract in a vitamin C-depleted population.

Vitamin C is important for the common cold and much else         Printer Friendly PDF this page! Follow this page for updates
This page is in the following categories (# of items in each category)