The objective of this trial was to evaluate the safety and efficacy of a single oral high-dose vitamin D3 supplementation in an intensive care setting over a one-week observation period.

Methods: This was a randomized, double-blind, placebo-controlled pilot study in a medical ICU at a tertiary care university center in Graz, Austria. Twenty-five patients (mean age 62 +/- 16yrs) with vitamin D deficiency [25-hydroxyvitamin D(25(OH)D) (less than or equal to) 20 ng/ml] and an expected stay in the ICU >48 hours were included and randomly received either 540,000 IU (corresponding to 13.5 mg) of cholecalciferol (VITD) dissolved in 45 ml herbal oil or matched placebo (PBO) orally or via feeding tube.

The highest 25(OH)D level reached was 64 ng/ml, while two patients showed a small (7 ng/ml) or no response (1 ng/ml). Hypercalcemia or hypercalciuria did not occur in any patient.

Conclusions: This pilot study shows that a single oral ultra-high dose of cholecalciferol corrects vitamin D deficiency within 2 days in most patients without causing adverse effects like hypercalcemia or hypercalciuria.

PDF is attached to the bottom of this page

Paragraphs Clipped from the PDF

Two patients in the VITD group demonstrated either a small (7 ng/ml) or no (1 ng/ml) increase in 25(OH)D levels.
In one patient, this may be attributable to gastrointestinal dysfunction after hypoxia related to near-drowning and resuscitation, and in the other to a history of sclerodermiform gastrointestinal graft-versus-host disease after allogeneic stem cell transplantation. Individual patient data are given in Table 3.

The progressive increase in 25(OH)D levels may not only be explained by initial differences in intestinal absorption of vitamin D3, but also by limited capacity of the vitamin D binding protein transport system, or that of the liver to hydroxylate the precursor. Moreover, there may be interindividual differences applying to storage effects, whereby cholecalciferol is taken up or released by adipose and muscle tissues. However, most of the vitamin D that enters the body is catabolized and excreted without ever being stored in tissues, and without ever becoming 25(OH)D [27]. We thus cannot exclude that either a change towards smaller dosages or more frequent dosing intervals may also have yielded the desired effects and normalized 25(OH)D levels. 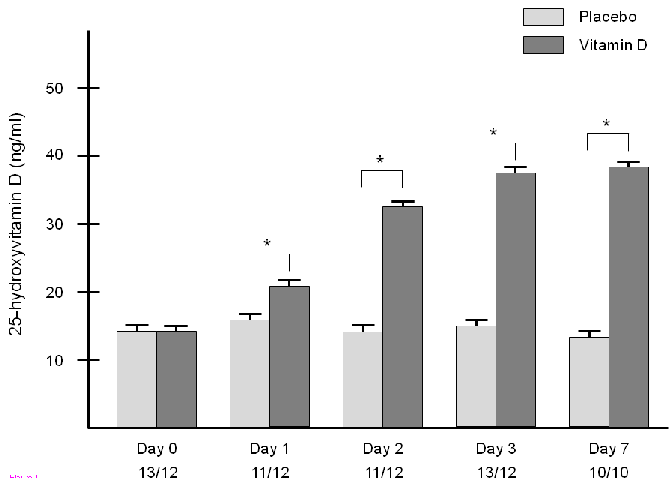 3X more likely to die within 3 months of being in ICU for 2 days if less than...600,000 IU of vitamin D – 42 ng at 3 months for 1 inj, 3 inj, oral monthly, o...Critically ill need vitamin D – how much and which test to use is TBD – Nov 2014One pill every two weeks gives you all the vitamin D most adults needOverview Loading of vitamin D