Background: Vitamin D insufficiency has been associated with a number of adverse pregnancy outcomes, and has been recognized as a public health concern.

Aim: The objective of this study was to determine the impact of vitamin D deficiency on maternal complications like gestational diabetes mellitus (GDM), anemia, iron deficiency, and preeclampsia among pregnant women.

Subjects and methods: This was a cohort study undertaken at antenatal clinics at the Women's Hospital of Hamad Medical Corporation in Doha. A total of 2,487 Arab pregnant women above 24 weeks' gestation with any maternal complication were approached, and 1,873 women (75.3%) consented to participate in the study. Data on sociodemographic and clinical characteristics by interview and biochemistry parameters were retrieved from medical records. Multivariate logistic regression analysis was performed to determine the associated risk factors.

Conclusion: The study findings revealed that maternal vitamin D deficiency in pregnancy is significantly associated with elevated risk for GDM, anemia, and preeclampsia.
The risk of vitamin D deficiency was higher in Qataris, housewives and those with low monthly household income. 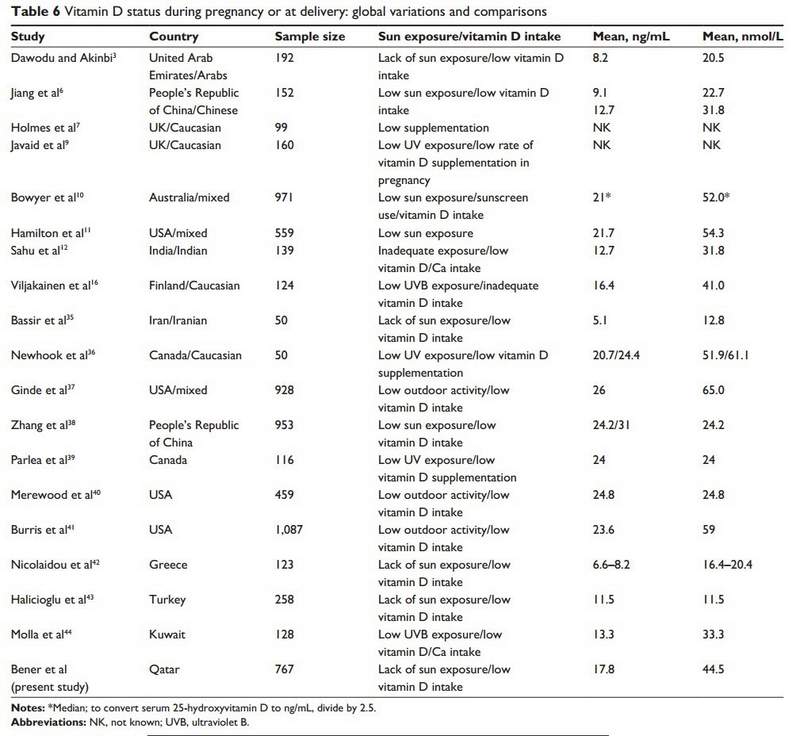 Pregnancy and low vitamin D in Qataris and women around the world – Sept 2013         Printer Friendly PDF this page! Follow this page for updates
This page is in the following categories (# of items in each category)
Pregnancy 748