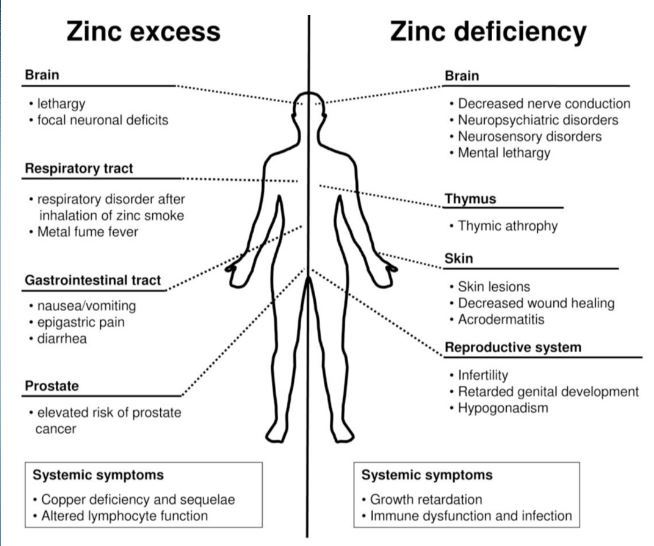 Note: The founder of VitaminDWiki takes 10 mg of Zin daily in cereral.
It costs less than 1 cent a day for the possible improvement in amount of Zinc getting to the cells

Zinc in Multiple Sclerosis: A Systematic Review and Meta-Analysis – June 2016

In the last 35 years, zinc (Zn) has been examined for its potential role in the disease multiple sclerosis (MS). This review gives an overview of the possible role of Zn in the pathogenesis of MS as well as a meta-analysis of studies having measured Zn in serum or plasma in patients with MS. Searching the databases PubMed and EMBASE as well as going through reference lists in included articles 24 studies were found measuring Zn in patients with MS. Of these, 13 met inclusion criteria and were included in the meta-analysis. The result of the meta-analysis shows a reduction in serum or plasma Zn levels in patients with MS with a 95% CI of [-3.66, -0.93] and a p value of .001 for the difference in Zn concentration in μM. One of six studies measuring cerebrospinal fluid, Zn levels found a significant increase in patients with MS with controls. The studies measuring whole blood and erythrocyte Zn levels found up to several times higher levels of Zn in patients with MS compared with healthy controls with decreasing levels during attacks in relapsing-remitting MS patients. Future studies measuring serum or plasma Zn are encouraged to analyze their data through homogenous MS patient subgroups on especially age, sex, and disease subtype since the difference in serum or plasma Zn in these subgroups have been found to be significantly different. It is hypothesized that local alterations of Zn may be actively involved in the pathogenesis of MS.
&nbspDownload the PDF from VitaminDWiki

Zinc Status and Autoimmunity: A Systematic Review and Meta-Analysis - Jan 2018

Zinc is an essential trace element for living organisms and their biological processes. Zinc plays a key role in more than 300 enzymes and it is involved in cell communication, proliferation, differentiation and survival. Zinc plays also a role in regulating the immune system with implications in pathologies where zinc deficiency and inflammation are observed. In order to examine the experimental evidence reported in the literature regarding zinc levels in the body of patients with autoimmune disorders compared to control individuals, a systematic review and meta-analysis were performed. From 26,095 articles identified by literature search, only 179 of them were considered potentially relevant for our study and then examined. Of the 179 articles, only 62 satisfied the inclusion criteria. Particularly for Fixed Model, Zn concentration in both serum (mean effect = -1.19; confidence interval: -1.26 to -1.11) and plasma (mean effect = -3.97; confidence interval: -4.08 to -3.87) samples of autoimmune disease patients was significantly lower than in controls. The data presented in our work, although very heterogeneous in the manner of collecting and investigating samples, have proved to be extremely consistent in witnessing a deficiency of zinc in serum and plasma of patients compared to controls.
&nbspDownload the PDF from VitaminDWiki

The Emerging Role of Zinc in the Pathogenesis of Multiple Sclerosis. – Sept 2017

Discussion of Zinc fingers on This is MS - 2016

{http://www.thisisms.com/forum/natural-approach-f27/topic28305.html|Lots of discussion with links to studies, a few of which are above]__

Printer Friendly PDF this page! Follow this page for updates
This page is in the following categories (# of items in each category)
Multiple Sclerosis 348 Autoimmune 162 Zinc 39
Edit Comments Files 3