&nbspDownload the PDF from sci-hub via VitaminDWiki 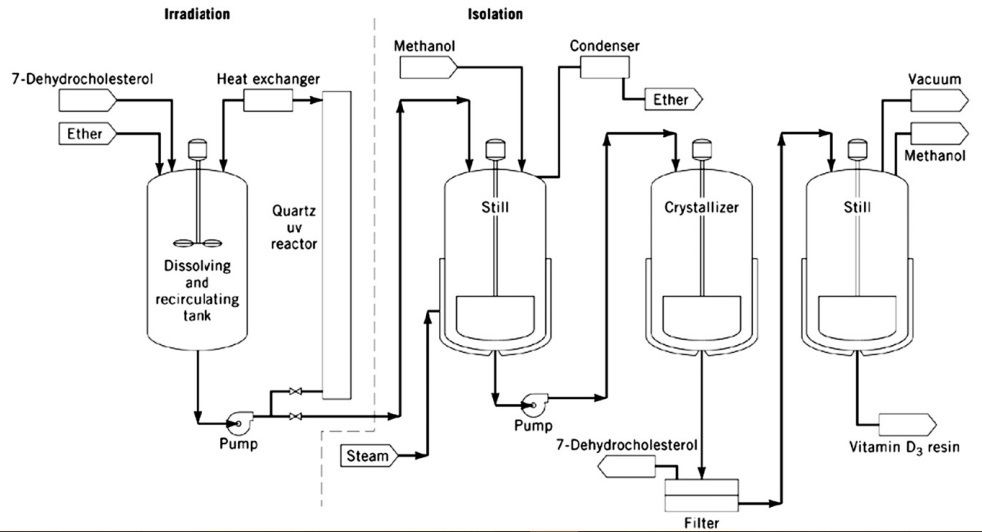 7-Dehydrocholesterol
The finding that vitamin D3 derived from the irradiation of cholesterol was a more efficient form of vitamin D than that found in plant sources (particularly when used in poultry feed) led to investigations to convert cholesterol into 7-dehydrocholesterol for the commercial production of vitamin D. Isolation of cholesterol from one of its natural sources is the first step in the commercial production of vitamin D3. Cholesterol occurs in almost all animals, and it can be extracted from the spinal cords and brains of large animals. The major commercial source is from sheep's wool. Spinal cord and brain extractions were acceptable sources for many years and were used when cholesterol prices rose to levels that justified the more expensive processing costs over those for the isolation of cholesterol from wool. However, today this source of cholesterol is not acceptable because of the danger of coextracting prion protein which can give rise to transmissible spongiform encephalopathy. Cholesterol obtained from wool grease is therefore the primary acceptable source of cholesterol for the manufacture of vitamin D. Sheep's wool must be cleaned after shearing and the wool grease that is obtained as a by-product from the washing contains about 15% cholesterol. The grease is a mixture of long-chain fatty-acid esters. These are saponified to give fatty acid soaps (usually isolated as the calcium salt) and an approximately equal weight of wool grease alcohols (containing a mixture of cholesterol, lanosterol, D2, and other sterols and fatty alcohols). The acid soaps are separated by filtration and are used as heavy greases in industry. The cholesterol is separated from the other wool wax alcohols (usually by complexation with calcium or magnesium chloride). The solid complex is broken and the product is crystallized and purified with methanol. Cholesterol of the highest quality is necessary for the preparation of 7-dehydrocholesterol since the yield and quality of the provitamin is dramatically affected by the purity of the cholesterol used as starting raw material. Companies such as the National Oil Products Company (NOPCO), and Winthrop Chemical Company, as well as others, became involved in the vitamin business because of their interest in fish oil.

These were among the first companies to examine the synthetic manufacture of vitamin D3 as an alternative to their use of cod liver oil. Several methods were investigated for the conversion of cholesterol to the provitamin. Windaus and Schenk [14,15] filed patents in 1935 assigned to the Winthrop Chemical Company for the chemical production of 7-dehydrocholesterol and its irradiation to form vitamin D3. This procedure involved the oxidation of cholesterol (1) (with the 3-hydroxy group protected as an acetate ester (5)) to form the 7-keto cholesteryl acetate ⑹ which was then reduced to the 7-hydroxycholesterol (7) with aluminum isopropylate in isopropyl alcohol. The 3,7-dihydroxycholesterol is benzoylated followed by dehydration of the 3,5-dibenzoate (8) at elevated temperatures to give the 7-dehydrocholesterol benzoate (9) (see Fig. 6.3).

This procedure gave relatively low yields of the product of only about 4% and other methods were sought to improve the conversion of cholesterol into 7- dehydrocholesterol. The Windaus procedure has been improved recently to a point where the procedure is now used currently for a majority of the 7-dehydrocholesterol production.

The bromination-dehydrohalogenation process developed in the 1940s (see Fig. 6.4) was for many years the most generally used and most economical process for the production of 7-dehydrocholesterol for vitamin D3 production. It involved the Ziegler allylic bromination [16] of the 7-position of cholesterol ⑴.The 3 p- hydroxyl group is protected from oxidation by esterification, usually as the acetate or benzoate (5). The free radical bromine addition is accomplished by a number of agents, e.g., N-bromosuccinimide, N-bromophthalimide, or preferably 5,5-dimethyl-1,3-dibromohydan- toin [17,18]. Bromine in carbon disulfide has also been employed using photo catalysis to generate the free- radical bromine [19]. 1,3-Dibromo,5,5-dimethylhydantoin (commonly called “brom 55”) has been, and is still, the most efficient reagent for the introduction of bromine into the 7-position of cholesterol. This ….

Vitamin D production by factories - chapter - 2009         (Cached) Printer Friendly PDF this page! Follow this page for updates
This page is in the following categories (# of items in each category)
About D - more info. 115