I have a lot of admiration for Drs. Edward and May Mellanby. A husband-and-wife team, they discovered vitamin D, and determined that rickets is caused by poor calcium (or phosphorus) status, typically due to vitamin D deficiency. They believed that an ideal diet is omnivorous, based on whole foods, and offers an adequate supply of fat-soluble vitamins and easily absorbed minerals. They also felt that grain intake should be modest, as their research showed that unsoaked whole grains antagonize the effect of vitamins D and A.

Not only did the Mellanbys discover vitamin D and end the rickets epidemic that was devastating Western cities at the time, they also discovered a cure for early-stage tooth decay that has been gathering dust in medical libraries throughout the world since 1924.

It was in that year that Dr. May Mellanby published a summary of the results of the Mellanby tooth decay reversal studies in the British Medical Journal, titled “Remarks on the Influence of a Cereal-free Diet Rich in Vitamin D and Calcium on Dental Caries in Children”. Last year, I had to specially request this article from the basement of the University of Washington medical library (1). Thanks to the magic of the internet, the full version of the paper is now freely available online CLICK HERE .

You don’t need my help to read the study, but in this post I offer a little background, a summary and my interpretation.

In previous studies, the Mellanbys used dogs to define the dietary factors that influence tooth development and repair. They identified three, which together made the difference between excellent and poor dental health (from Nutrition and Disease):

Once they had defined these factors, they set about testing their hypotheses in humans. They performed eight trials, each one in children in an institutionalized setting where diet could be completely controlled. The number of cavities in each child’s mouth was noted at the beginning and end of the period. I’ll only discuss the three most informative, and only the most successful in detail. First, the results: 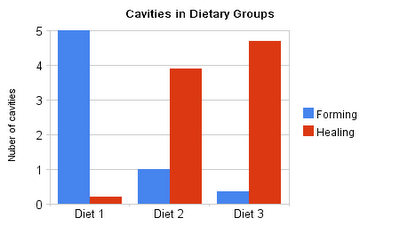 I’ll start with diet 1. Children on this diet ate the typical fare, plus extra oatmeal. Oatmeal is typically eaten as an unsoaked whole grain (and soaking it isn’t very effective in any case), and so it is high in phytic acid, which effectively inhibits the absorption of a number of minerals including calcium. These children formed 5.8 cavities each and healed virtually none– not good!

Diet number 2 was similar to diet 1, except there was no extra oatmeal and the children received a large supplemental dose of vitamin D. Over 28 weeks, only 1 cavity per child developed or worsened, while 3.9 healed. Thus, simply adding vitamin D to a reasonable diet allowed most of their cavities to heal.

Diet number 3 was the most effective. This was a grain-free diet plus supplemental vitamin D. Over 26 weeks, children in this group saw an average of only 0.4 cavities form or worsen, while 4.7 healed. The Mellanbys considered that they had essentially found a cure for this disorder in its early stages.

What exactly was this diet? Here’s how it was described in the paper (note: cereals = grains):

…instead of cereals- for example, bread, oatmeal, rice, and tapioca- an increased allowance of potatoes and other vegetables, milk, fat, meat, and eggs was given. The total sugar, jam, and syrup intake was the same as before. Vitamin D was present in abundance in either cod-liver oil or irradiated ergosterol, and in egg yolk, butter, milk, etc. The diet of these children was thus rich in those factors, especially vitamin D and calcium, which experimental evidence has shown to assist calcification, and was devoid of those factors- namely, cereals- which interfere with the process.

Carbohydrate intake was reduced by almost half. Bread and oatmeal were replaced by potatoes, milk, meat, fish, eggs, butter and vegetables. The diet is reminiscent of what Dr. Weston Price used to reverse tooth decay in his dental clinic in Cleveland, although Price’s diet did include rolls made from freshly ground whole wheat. Price also identified the fat-soluble vitamin K2 MK-4 as another important factor in tooth decay reversal, which would have been abundant in Mellanby’s studies due to the dairy. I’ve never seen the Mellanbys refer to Price, or vice versa, despite the fact that they were contemporaries and had parallel and complementary findings. The Mellanbys did not understand the role of vitamin K2 in mineral metabolism, and Price did not seem to appreciate the role of phytic acid from unsoaked whole grains in preventing mineral absorption.

The tests do not indicate that in order to prevent dental caries children must live on a cereal-free diet, but in association with the results of the other investigations on animals and children they do indicate that the amount of cereal eaten should be reduced, particularly during infancy and in the earlier years of life, and should be replaced by an increased consumption of milk, eggs, butter, potatoes, and other vegetables. They also indicate that a sufficiency of vitamin D and calcium should be given from birth, and before birth, by supplying a suitable diet to the pregnant mother. The teeth of the children would be well formed and more resistant to dental caries instead of being hypoplastic and badly calcified, as were those in this investigation.

If I could add something to this program, I would recommend daily tooth brushing and flossing, avoiding sugar, and rinsing the mouth with water after each meal.

This diet is capable of reversing early stage tooth decay. It will not reverse advanced decay, which requires professional dental treatment as soon as possible. It is not a substitute for dental care in general, and if you try using diet to reverse your own tooth decay, please do it under the supervision of a dentist. And while you’re there, tell her about Edward and May Mellanby!

The 1932 article does not say HOW MUCH vitamin D, but does mention vitamin A

Vitamin D and minimum cereal minimized tooth decay – in 1932         Printer Friendly PDF this page! Follow this page for updates
This page is in the following categories (# of items in each category)
Dental 86 Interactions with Vitamin D 106