Chronic kidney disease (CKD) is an emerging public health problem and one of the most powerful predictors of premature cardiovascular disease. Emerging evidence suggests that the progression of CKD and many of the cardiovascular complications may be linked to hypovitaminosis D. Patients with CKD have an exceptionally high rate of severe vitamin D deficiency that is further exacerbated by the reduced ability to convert 25-(OH)vitamin D into the active form, 1,25 dihydroxy-vitamin D. As new evidence has improved our understanding of classical, as well as the nonclassical, functions for vitamin D, it has become apparent that the autocrine role of vitamin D is an important modulator of several systems including the immune, renal and cardiovascular systems. In addition to the traditional supplementation of 1,25-vitamin D to CKD patients, by assessing and repleting 25-(OH)vitamin D deficiency, physicians will adequately fuel both the renal and extra-renal pathways of calcitriol synthesis maintaining the classical, as well as the non-classical, functions of vitamin D that ultimately influence clinical outcomes in this high-risk group of patients. Because of the high rates of hypovitaminosis D and progression of CKD to end-stage renal disease in minority populations, these findings are highly relevant to the national efforts to reduce health disparities. Healthcare providers are called to join the intensified efforts of public health officials to disseminate and implement updated guidelines and recommendations to halt the growing epidemic of vitamin D deficiency, particularly in high-risk populations. 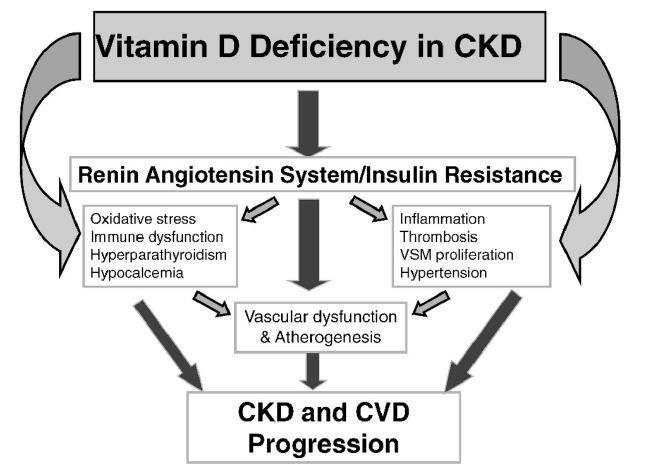 Vitamin D and Kidney Disease - 2009         Printer Friendly PDF this page! Follow this page for updates
This page is in the following categories (# of items in each category)
Kidney 202