Gut microbiota mediated low-grade inflammation is involved in the onset of type 2 diabetes (T2DM). In this study, we used a high fat sucrose (HFS) diet-induced pre-insulin resistance and a low dose-STZ HFS rat models to study the effect and mechanism of Lactobacillus casei Zhang in protecting against T2DM onset. Hyperglycemia was favorably suppressed by L. casei Zhang treatment. Moreover, the hyperglycemia was connected with type 1 immune response, high plasma bile acids and urine chloride ion loss. This chloride ion loss was significantly prevented by L. casei via upregulating of chloride ion-dependent genes (ClC1-7, GlyRα1, SLC26A3, SLC26A6, GABAAα1, Bestrophin-3 and CFTR). A shift in the caecal microflora, particularly the reduction of bile acid 7α-dehydroxylating bacteria, and fecal bile acid profiles also occurred. These change coincided with organ chloride influx. Thus, we postulate that the prevention of T2DM onset by L. casei Zhang may be via a microbiota-based bile acid-chloride exchange mechanism.

Obesity-associated T2DM has drawn much scientific attention, as evident by the rapidly increasing number of published investigations. Data showed that the world population is facing a surge in T2DM as well as individuals with prediabetes due to rapid change in lifestyle1. Thus, both strategies for both the prevention and treatment of diabetes are needed, especially in the dietary aspect.

Diet is directly associated with intesinal microbiota. There is a growing interest in understanding the changes of gut microbiota in the context of diabetes. In recent years, metagenomics has opened a new era of microbial ecology that has allowed deeper understanding of microbiome associated hyperglycemia2, 3. On the other hand, it is proposed that high-fat diet induces a low-grade inflammation through modifying microflora and thus increases lipopolysaccharides (LPS) and in turn triggers the development of metabolic diseases4. More interestingly, commensal microbiota and related bile acids profile could be rapidly reshaped by dietary alteration5, but how the pathogensis of T2DM relates with the interaction between bile acids and chloride ion is rarely studied. This aspect is of particular interest because both bile acids and choride ions can acted as regulating signaling molecules for metabolic homeostasis6, 7.

Several studies have also shown that probiotic products could regulate the blood glucose level in diabetic human8, 9. Moreover, L. casei Shirota has been reported to reduce blood glucose level through reducing lipopolysaccharide-binding protein10. One research showed that B. animalis 420 could prevent mice from obesity-induced T2DM through an improvement of bacterial translocation and overall inflammatory status11. Recently, the gut microbe, Akkermansia muciniphila, exhibited an insulin resistance-reducing effect and may have potential application in T2DM12.

Our previous research showed that L. casei Zhang could improve impaired glucose tolerance in rats due to altered microbiota composition which led to an upregulation of ostecalcin level13. The aims of the present study were to investigate whether probiotic L.casei Zhang supplementation could prevent the symptoms of rat model of T2DM and identify its mechanisms.

In conclusion, L. casei Zhang may be able to improve the onset and development of glycemia by rapidly altering gut microbiota. The short-term response to probiotic-altered microbiota may result in a chloride ion influx in multiple organs before chronic inflammation occurs. Moreover, tissue chloride ion loss and related genes suppression linked T2DM pathogenesis to its comorbid medical conditions/diseases (Fig. 6). Future studies will need to address the precise mechanisms involved in the bile acids-chloride ion exchange. 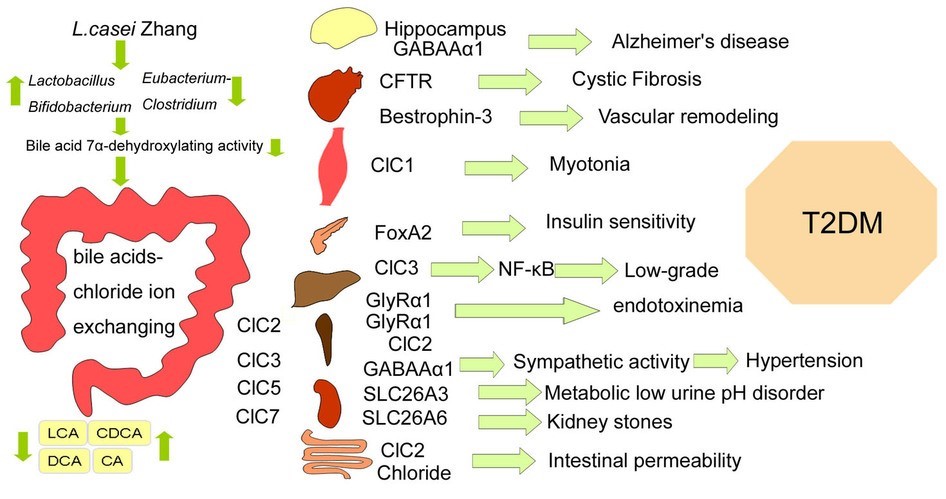 Probiotic (Lactobacillus casei Zhang) reduces T2 Diabetes in mice – July 2014         Printer Friendly PDF this page! Follow this page for updates
This page is in the following categories (# of items in each category)
Antibiotics, probiotics 80

Lung Cancer risk reduced 33 percent in those having lots of fiber and yogurt ...