Peroxynitrite – possible cause of increases in many health problems – Jan 2018

First page of PDF
NOTE to Readers: I am seeking one or two scientists to take the following research and paper forward. There are really two papers here. One is a paper that strengthens the scientific connection between peroxynitrite and at least forty fast-growing chronic diseases. The second paper is a translation of the science that can be offered to the American people, who remain unaware of the root cause of the dramatic increase of chronic disease and conditions in the US. More than 170 million Americans are currently suffering from diseases and conditions that can be vastly improved or even reversed by reducing levels of peroxynitrite through moderate changes in lifestyle, the immediate environment and diet plus nonprescription supplementation. While scientists recognize the pivotal role of peroxynitrite in disease, few policy makers and physicians are aware of the opportunity they have to heal a nation suffering from chronic diseases. The annual cost of just forty fast-growing diseases is more than $2.5 trillion. With increased awareness and action this cost to society can be reduced to a fraction by simply implementing the knowledge we already have.

There has been unprecedented growth in a new class of chronic diseases in the US since 1990. Four categories of disease have virtually exploded: autoimmune, neurological, metabolic and inflammatory. Meanwhile, there has been a similar uptick in reproductive conditions like infertility and a half dozen psychiatric disorders.
While the major health threats of the 20th century: cardiovascular disease, infectious disease and cancer, are barely growing, at least forty chronic diseases and disorders have more than doubled in the past generation. Many of these new age diseases weren’t even on our radar until the 1980’s.
In a single generation, there has been a dramatic acceleration* in the prevalence of diseases and disorders like

The values for these increases were derived from scientific literature; that they are over- precise is a given. These generational increases in prevalence are offered to convey a clearer picture of the spectacular increase in chronic disease

Observations by VitaminDWiki on Peroxynitrite and Vitamin D

(a few columns from a PDF table) 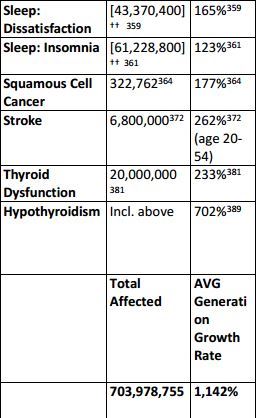 Huge increases in some diseases: peroxynitrite, Vitamin D, toxins, or what?

Since genetics of humans have remained substantially unchanged over time, most believe these diseases are linked to our diet, lifestyle and/or
Environment.”

Peroxynitrite – possible cause of increases in many health problems – Jan 2018         (Cached) Printer Friendly PDF this page! Follow this page for updates
This page is in the following categories (# of items in each category)
Health 95