Introduction. A role for vitamin D deficiency in Parkinson's disease (PD) has recently been proposed. Given the growing body of evidence for the association of vitamin D with several neurodegenerative disorders and unavailability of any published study in the Middle East, the present study is aimed to determine the associations of circulating 25-hydroxyvitamin D (25OHD) levels with the severity of PD in an Iranian sample.

Results. Mean ± SD levels of 25OHD were 28.5 ± 1.4 and 27.1 ± 1.5, for males and females, respectively. Also, 38.4% of the patients showed deficiency levels of 25OHD (<20 ng/mL), and 72.8% had insufficient levels (<30 ng/mL). High prevalence of 25OHD insufficiency in subjects with early disease was not associated with HR stage and UPDRS scores even after multivariate adjustment for possible confounders including disease duration.

Conclusions. These findings are consistent with the possibility that vitamin D status does not seem to deteriorate during the early disease stages of PD. Further studies are needed to reveal the natural role and significance of vitamin D insufficiency in PD.
PMID: 23956745

Data looks nice, but they did not have enough data to establish statistical significance 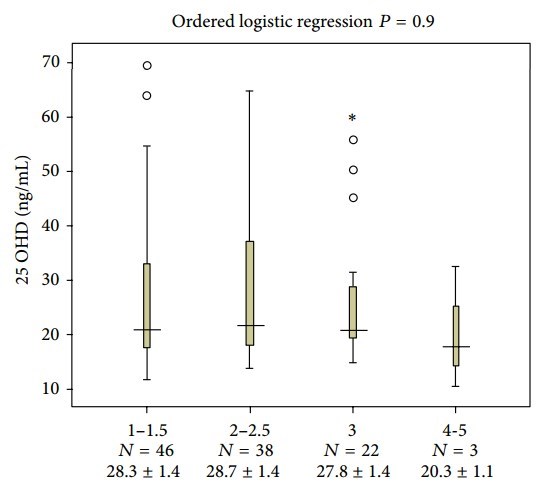 Parkinson's disease severity association with level of vitamin D – 2013         Printer Friendly PDF this page! Follow this page for updates
This page is in the following categories (# of items in each category)
Parkinson 86