Off topic: Survey of medicine usage in Australia – July 2012

A national census of medicines use: a 24-hour snapshot of Australians aged 50 years and older

Objective: To explore the current use of conventional and complementary medicines in Australians aged ? 50 years.

Design, setting and participants: Cross-sectional postal survey sent to a random sample of 4500 Australians aged ? 50 years between June 2009 and February 2010.

Conclusions: The use of multiple medicines is common and higher than reported in the 1995 National Health Survey. Today, much medicines use is to prevent future disease by influencing risk factors. High levels of polypharmacy highlight the need to support the safe and effective use of medicines in the community. Although doctors recommend or prescribe most medicines, self-directed medication use is common. This highlights the need for consumer access to accurate information and strategies to improve health literacy about medicines.

The use of medicines for the treatment of disease is a common health-related action by Australians. Medicines are not only used to treat diagnosed medical conditions but, increasingly, to manage risk factors.1 Individuals’ patterns of medicines use are not well understood, including the combined use of prescription, over-the-counter (OTC) and complementary medicines. Smaller surveys of specific populations’ use of medicines have been conducted,2,3 but the most recent Australia-wide survey was the 1995 National Health Survey.4 A majority of published Australian research on the use of medicines is based on the analysis of dispensing data from the Australian Pharmaceutical Benefits Scheme and the Repatriation Pharmaceutical Benefits Scheme; however, these data sources do not include OTC, complementary and unsubsidised prescription medicines.5

The most frequent specific reasons for use were

Occasional medicines were most often used for pain relief, including 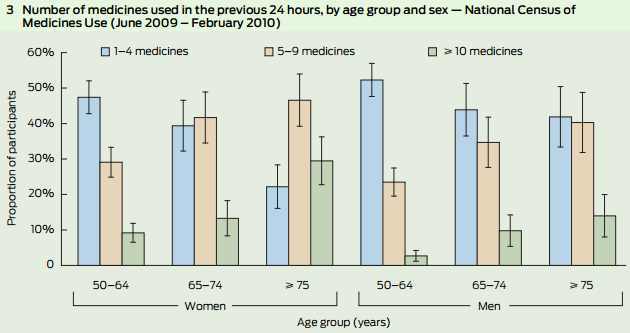 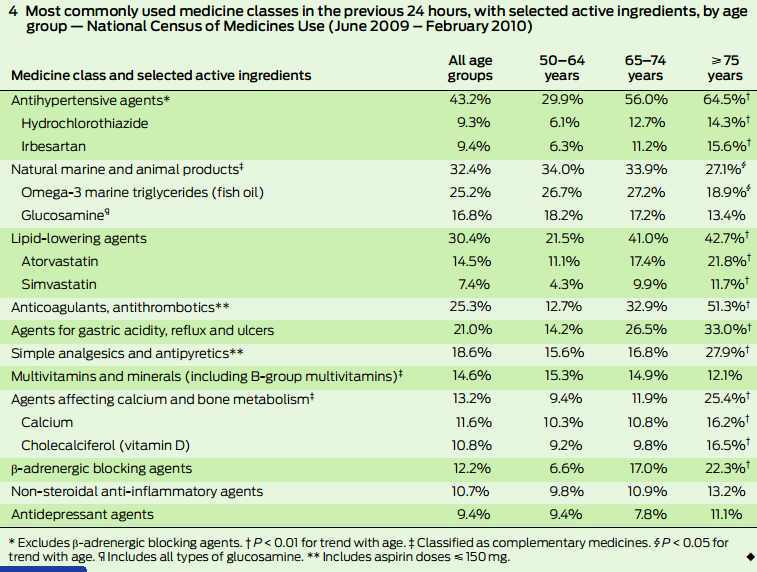 Off topic: Survey of medicine usage in Australia – July 2012         Printer Friendly PDF this page! Follow this page for updates
This page is in the following categories (# of items in each category)
Off Topic 134 Vitamin D in Australia and New Zealand 63